This article provides an update to data for the Alternative measures of Real Households Disposable Income and the Saving Ratio that was published on 2 November 2015. In this article we presented an update to the adjusted measure of real households and non-profit institutions serving households (NPISH) disposable income and the saving ratio which attempted to quantify disposable income less the parts that are imputed and unobserved by households.

This data within this article is consistent with the Quarterly National Accounts published on 23 December 2015.

Future publications of the alternative measures of real households disposable income and the saving ratio will present the cash saving ratio on a net interest basis only.

However, by adjusting GDI to remove the effects of inflation, we are able to estimate another useful measure of disposable income called real disposable income. This is a measure of real purchasing power of households and NPISH incomes, in terms of the quantity of goods and services they would be able to purchase. We use the households and NPISH expenditure deflator to remove the effects of price inflation.

The measure of RHDI published within the United Kingdom Economic Accounts (UKEA) contains certain elements which, though they are required for compiling a sequence of national accounts, are not directly observed by households.

For example, imputed rentals represent the value of housing services that owner occupiers derive from their homes. This is amount that they would have to pay in rent to achieve the same consumption of housing services. Whilst this concept is important when measuring economic output, it is not directly observed by home owners. As a result the national accounts measure of RHDI can differ from the perceived experience of households.

We therefore consider "cash RHDI". This measure removes imputed rental and other non-cash components resulting in a measure of RHDI which is a closer representation of disposable income as measured by social surveys. This is mainly achieved following guidance within the Organisation for Economic Co-operation and Development (OECD) Framework for Statistics on the Distribution of Households Income, Consumption and Wealth and the United Nations Economic Commission for Europe (UNECE) Canberra Group Handbook on Households Income Statistics.

While many of the decisions about which transactions should be included in the calculation of cash RHDI are relatively straightforward, one transaction for which the case is finely balanced is interest paid (D41g-use). This refers to the interest paid by households on loans and other forms of credit.

On the one hand, interest payments are an expense that households directly observe and therefore should be included in the calculation of a "cash" measure of RHDI. However a different view is that decisions about paying interest, for example deciding whether or not to take out a loan, are taken after knowing how much disposable income you have.

Therefore, throughout the following analysis we present cash RHDI on 2 different basis:

Figure 1 shows the growth rates of households and NPISH cash RHDI per capita on a gross and net interest basis alongside RHDI per capita as published in the UKEA, comparing quarters with the same quarter of the previous year.

Figure 2 shows the national accounts consistent saving ratio alongside the 2 cash saving ratios; on a net and a gross interest basis. The 3 measures follow broadly the same pattern throughout the time series from Quarter 1 (Jan to Mar) 2007 through to Quarter 3 (July to Sept) 2015.

During these periods expenditure exceeded income. This can occur by either drawing down existing savings or by borrowing. We know that during this period there was an increase in consumer debt and in particular mortgage debt, so increases in borrowing are likely to have had an impact on falling saving ratios over this period.

From the beginning of Quarter 1 (Jan to Mar) 2008 to Quarter 2 (Apr to June) 2009, all 3 measures of the saving ratio rose sharply. There was greater economic and financial uncertainty which typically results in households cutting back on expenditure and increasing their level of saving.

From Quarter 2 (Apr to June) 2009 onwards, there has been an overall decline in the long term trend of the cash saving ratio estimate on a net and gross interest basis. This trend can also be seen in the published national accounts saving ratio from Quarter 3 (July to Sept) 2010. From Quarter 3 (July to Sept) 2013 to Quarter 1 (Jan to Mar) 2014, there was a sharp decrease in the net and gross interest cash measures compared to the published national accounts saving ratio which reflects differences due to the removal of imputed transactions. 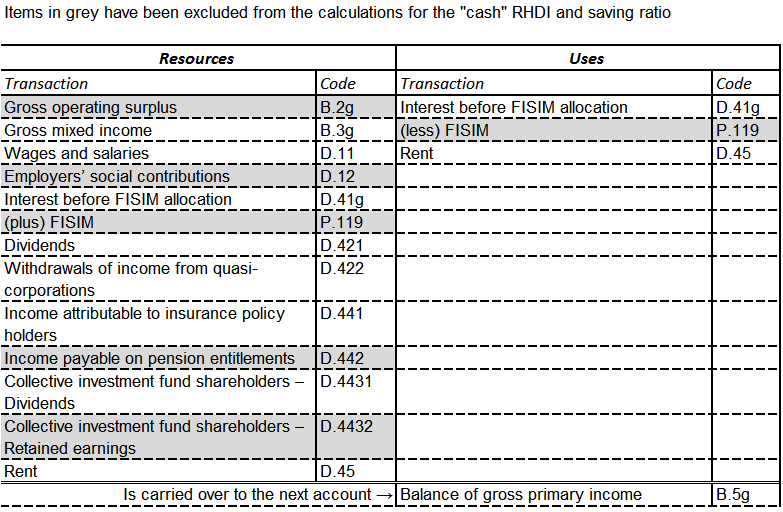 Adjustments to transactions which calculate the saving ratio: