“A small fall in petrol prices alongside food prices rising more slowly than last year helped pull down inflation, as many of the early 2017 price increases due to the previous depreciation of the pound have started to work through the system.

"Hotel prices also fell and the cost of ferry tickets rose more slowly than last year, when prices were collected on Valentine’s Day when many people could have been taking mini-breaks.

“There were some signs of slowing price rises in the cost of products leaving factories, with food and petroleum products prices falling. Inflation of raw materials is also slowing down following high annual inflation in 2017, with prices of crude oil lower than in January.

“House price growth remained steady, with prices increasing strongly across much of the country, although London and the North East are both lagging behind." 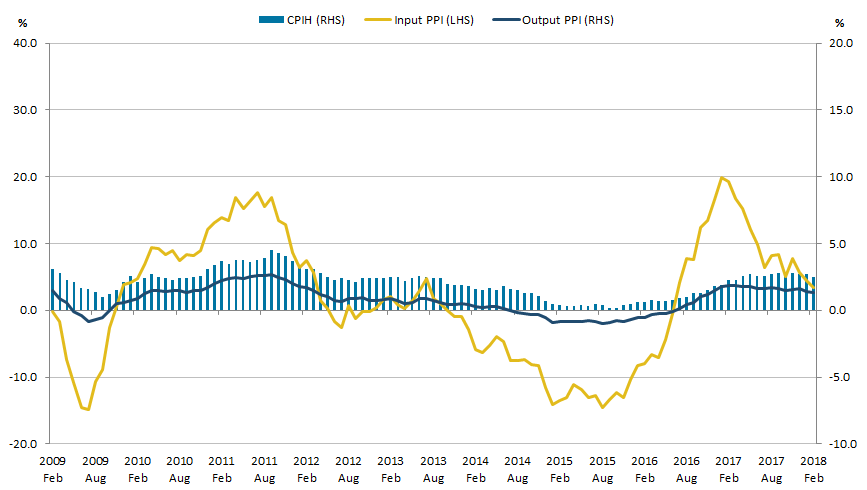 Figure 2 shows the contributions to the 12-month growth rate of the Consumer Prices Index including owner occupiers’ housing costs (CPIH) by category of spending. Housing, water, electricity, gas and other fuels has fairly consistently contributed the most to the 12-month growth rate of CPIH, between January 2013 and February 2018, contributing an average of 0.56 percentage points per month over the period.

Figure 2: Contributions to the growth rate of the Consumer Prices Index including owner occupiers' housing costs (CPIH) by category of spending

Download this chart Figure 2: Contributions to the growth rate of the Consumer Prices Index including owner occupiers' housing costs (CPIH) by category of spending

The increase in the 12-month growth rate of CPIH between April 2016 and April 2017 was driven largely by increases in the contribution from the transport category, in particular motor fuels. This reflected increases in both the dollar and sterling prices of crude oil, coupled with a weakening of the sterling effective exchange rate. Following this, the 12-month growth rate of CPIH has been fairly stable between August 2017 and January 2018 with the largest contributions coming from transport, and housing, water, electricity, gas and other fuels.

In the most recent month, February 2018, the 12-month growth rate for CPIH has fallen to 2.5%, down from 2.7% in January 2018. This reflects decreasing inflation across a range of goods and services, with the majority of components of CPIH contributing less to the headline rate in February 2018 than they did in January 2018.

The main driver of this change was transport, which contributed 0.08 percentage points less to the headline 12-month growth rate of CPIH in February than January. Food and non-alcoholic beverages, and restaurants and hotels both contributed 0.06 percentage points less to the headline rate over the same period. This recent trend may be partly attributable to the gradual strengthening of sterling over the same period, which reduces the inflationary pressure of imported goods and services.

The recently published country and regional relative consumer price levels data (RRCPL) uses spatial adjustment factors to estimate relative price levels for goods and services in different countries and regions of the UK. Taking UK national average prices as the reference point (UK equals 100), Table 1 shows how prices compare for different goods and services between countries and regions. It is important to note that these spatial price indices do not provide information on price change over time.

Table 1 also shows that when prices are broken down further into divisional categories, we can see greater or lesser country and regional variation, depending on the component. For example, there is a small amount of variation in the country and regional prices for food and non-alcoholic beverages, where London prices are 2.2% above the UK average and prices in England (excluding London) are 2.4% below the UK average. This suggests that across all countries and regions, food and non-alcoholic beverage prices are broadly similar. Prices for clothing and footwear exhibit similar differences, ranging from 3.5% above the UK average in London to 2.3% below in Wales. The low level of variation in prices across countries and regions for these divisions may be attributable to the dominance of large retailers who display little variation in their pricing across countries and regions.

Greater price variation exists in the divisions that include an element of services, such as restaurants and hotels, as well as recreation and culture. This is most noticeable in London, where restaurants and hotels, and recreation and culture prices are 13.0% and 14.8% above the UK average respectively. This likely reflects the variance in labour costs between regions, which make up a large proportion of the total costs in the services industry. The variability in the cost of renting or leasing outlets across the regions may also impact on the price of service-based divisions.

Figure 3 shows the 12-month growth rates for core components of the input and output Producer Price Index (PPI) and the Consumer Prices Index including owner occupiers’ housing costs (CPIH). The purpose of the core series is to strip away the more volatile components in each measure that are prone to temporary shocks, which may mask the underlying inflation level. Excluding the volatile series from these measures means that the 12-month growth rate is more stable than the aggregate series. All three core series exclude food, beverages and tobacco while core input PPI also excludes petroleum-based products (FBTP) and core CPIH also excludes energy1. 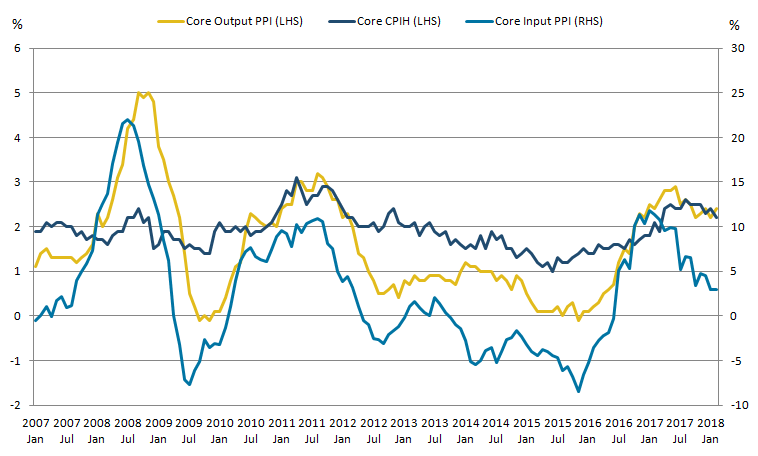 Previous analysis shows that components of core input PPI tend to broadly track the sterling effective exchange rate, due to core input PPI containing a large proportion of imported goods. Similarly, the movements in core output PPI appear to broadly track movements in core input PPI but with a slight lagged effect. This suggests that changes to the cost of inputs take time to translate into changes in the price of outputs. This may be due partly to fixed-term contracts between suppliers of inputs and producers.

Notes for: Falls in core input PPI have not yet fed through to core output PPI and core CPIH

Figure 4: Annual house price rates of change of flow and stock of properties

Download this chart Figure 4: Annual house price rates of change of flow and stock of properties

Figure 4 shows that the annual growth-rate trends for both indices are similar, which may be due to the flow of houses sold each year being broadly representative of the housing stock across England and Wales. However, the flow-based measure is on average slightly higher than the stock.

The difference between the two series was greatest in October 2000, when the flow-based measure was 2.4 percentage points higher than the stock-based measure. Around 70% of the difference in the stock and flow annual growth rates during 2000 can be explained by four of the Acorn groups used as characteristics in the regression model. Acorn is a geo-demographic segmentation of residential neighbourhoods in the UK and are used as variables within the regression analysis that estimates UK HPI. Four of the groups fall into the categories of “financially stretched” and “urban adversity”, and are much less prevalent in the flow-based measure as they are sold less often.

For example, there are twice as many houses classified as “struggling estates” in the stock as there are in the flow. House prices in these areas tend to be lower, resulting in a lower stock-measure HPI compared with flow-based and a lower inflation rate due to how infrequently they’re sold.

The remaining 30% can be explained by differences including the property type and distribution of rooms. For example, detached houses have a higher proportion of the flow-based measure given they are transacted more frequently, with flats transacted less often. There is a larger proportion of properties with two habitable rooms in the stock of properties compared with the flow. In fact, 10% of the difference between the stock-based measure and flow-based measure in 2000 can be explained by properties with two habitable rooms.

Another example is that more frequently transacted houses tend to be in more affluent areas, which also tend to have higher house prices. Consequently, the average price level of the flow-based measure of house prices tends to be above that of the stock. The presence of social housing in the housing stock may also partially explain the difference, as houses owned by local authorities are not frequently transacted and therefore do not contribute to the flow but are still included in the stock.

Further analysis on the differences is contained in the Stock-weighted House Price Index article.