Output is measured by gross domestic product (GDP) (with some experimental estimates in terms of net domestic product - NDP - as described further below). Labour input is measured in two ways – by total hours worked and by numbers of workers in employment. These two measures of labour input can yield different results, reflecting differences in working patterns across countries and compositional movements over time, such as a shift towards part-time working.

Comparability across countries is achieved by using estimates of GDP and labour inputs from a common source (the Statistics Directorate of the OECD) as far as possible, and by converting local currency based measures of GDP using purchasing power parity (PPP) exchange rates. PPP exchange rates (usually referred to simply as PPPs) attempt to equalise the cost of a representative basket of goods and services in countries with different national currencies. An ONS article explaining the uses and limitations of PPPs (246.1 Kb Pdf) is available on our website.

The estimates in this release update those published on 17 October 2014. This release cycle reflects the publication and revision cycles of the component data series.

In interpreting these estimates users should bear in mind that PPPs provide only an approximate conversion from national currencies and may not fully reflect national differences in the composition of a representative basket of goods and services. Additionally, care should be taken in interpreting movements in current price productivity estimates over time. For example, an increase in UK productivity relative to another country could be due to UK productivity growing faster, or falling less, or due to changes in relative prices in the two countries, or some combination of these movements.

For the first time this release includes estimates of current price NDP per hour worked for the G7 countries, indexed as in the main estimates to UK = 100. As explained further below, NDP can be seen as a measure of economic output which leaves productive capacity unchanged and is therefore a more sustainable measure than GDP. On the other hand, measures of NDP are likely to be less consistent across countries than measures of GDP. At this stage we are not publishing estimates based on constant price NDP, partly because such estimates are likely to add little to the growth rates of GDP per hour and per worker, and partly because consistency issues are larger still. As always, ONS welcomes feedback from users on these new estimates.

This release also includes productivity comparisons between the UK and a group of its main trading partners outside the G7 (Belgium, Ireland, the Netherlands and Spain). Productivity comparisons with these countries were last published in February 2014. Estimates for these countries have been updated to 2013 and earlier estimates have been revised, principally to reflect the adoption of the ESA 2010 national accounting standards. Together with the rest of the G7, these countries account for over half of the UK’s exports and imports.

Current price productivity estimates allow for comparison of how much economic output, measured in common currency terms, is produced by each worker and hour worked across countries in a particular year, relative to the UK=100. Further information is available in Tables 1 and 2 in the reference table (219 Kb Excel sheet) component of this release and at the back of the PDF version of this statistical bulletin.

Revised estimates for 2013 show that UK output per worker was: 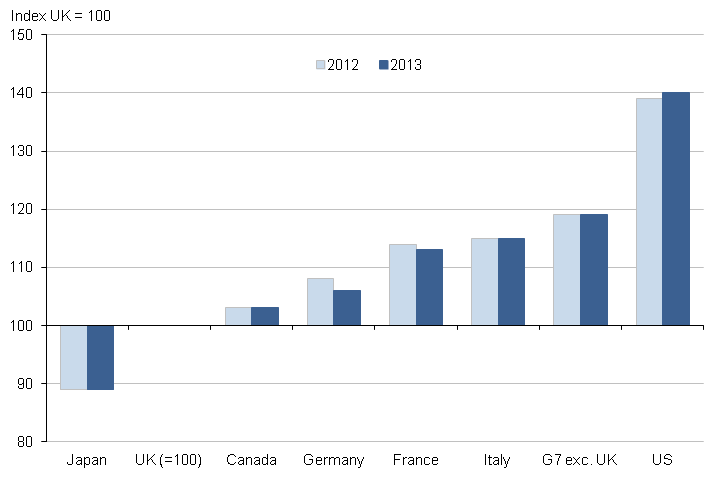 The general trend across the G7 as a whole is towards lower hours, perhaps reflecting workers preference for more leisure time as living standards rise over time. Average hours worked in the UK are close to the G7 average, with some evidence of an upturn in 2012 and 2013.

Constant price productivity estimates are indexed to 2007=100 and show the evolution of labour productivity for each country and group of countries over time. Further information is available in Tables 3 and 4 in the reference table (219 Kb Excel sheet) component of this release and at the back of the PDF version of this statistical bulletin. The following commentary focuses on GDP per hour worked, which, by allowing for movements in average hours worked, provides a more comprehensive measure of movements in productivity than GDP per worker.

Figure 4 shows GDP per hour worked for the UK and an aggregated series for the rest of the G7, together with simple projections based on average productivity growth over 1997-2007, that is, before the global economic downturn. On this basis, the combination of strong UK productivity growth up to 2007 and weak productivity performance since 2007 implies a productivity gap of around 15-16% in 2013.

Figure 5 illustrates the difference in productivity trajectories over recent years between the main European economies on the one hand, and North America and Japan on the other hand. Output per hour fell sharply in most countries over the 2008-09 downturn, but then rebounded sharply in Japan, Canada and - especially - the US. However, the recovery in productivity has been weaker and more in line with the UK experience in France, Germany and Italy.

Converting the time series in figure 5 into productivity gaps (calculated as in figure 4) for 2013 would yield gaps of around 11% for Germany but only around 4% for Italy. This is because trend productivity growth in the period prior to the economic downturn was much weaker in Italy than in Germany.

By accounting for the value that would need to be set aside to leave the value of a country's capital stock unchanged, NDP can also be seen as preferable to GDP as a measure of a country’s sustainable living standards. As an analogy, households are likely to take depreciation of their capital assets such as cars and furniture into account in gauging their living standards over the medium term, so it makes sense for economic policy makers also to take account of depreciation of productive assets.

It should be noted that NDP estimates of productivity in this release are experimental and do not have National Statistics status. One reason for interpreting these estimates with caution is that methodologies used in deriving estimates of capital consumption vary across countries. For example, in practice capital consumption is estimated using country-specific assumptions about asset lives and depreciation profiles, rather than international benchmarks. This means that the depreciation charge for a particular type of capital asset of a particular vintage (for example, a one-year old tractor) may vary considerably from country to country.

A further caveat is that PPPs used to convert national measures of output are based on the basket of goods and services that comprise GDP, and do not take account of capital consumption.

There are additional issues in converting from current price to constant price measures of capital consumption, since the choice of deflators is not straightforward. This is one reason why we are not publishing constant price productivity estimates based on NDP in this release.

As always, ONS welcomes feedback from users on the value of these estimates. 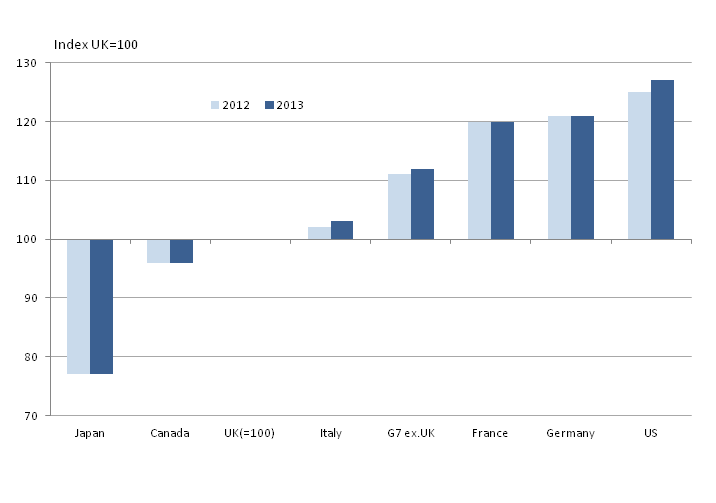 Figure 6 shows levels of NDP per hour worked, equivalent to the GDP-based estimates in figure 1. Comparing the two sets of estimates it is apparent that, as anticipated, productivity differences between the UK and the high productivity countries (France, Germany and the US) are not as great in terms of NDP as in terms of GDP. For example, the productivity differential between the UK and the US in 2013 is 27 percentage points in figure 6 (NDP basis), compared with 31 percentage points in figure 1 (GDP basis).

In this section we update estimates for productivity comparisons between the UK and a group of smaller European countries last published in February 2014. As in the main estimates, these revert to GDP as the measure of economic output. These estimates have not been assessed by the UK Statistics Authority and therefore do not have National Statistics status.

Current price comparisons of GDP per hour worked are shown in figure 7 for 2012 and 2013. Longer time series are available in Table 5 (GDP per hour) and Table 6 (GDP per worker) in the reference table (219 Kb Excel sheet) component of this release. Comparatively large upward revisions to GDP estimates for the Netherlands reflecting adoption of ESA 2010 accounting standards have contributed to a widening of the productivity differential over the UK. 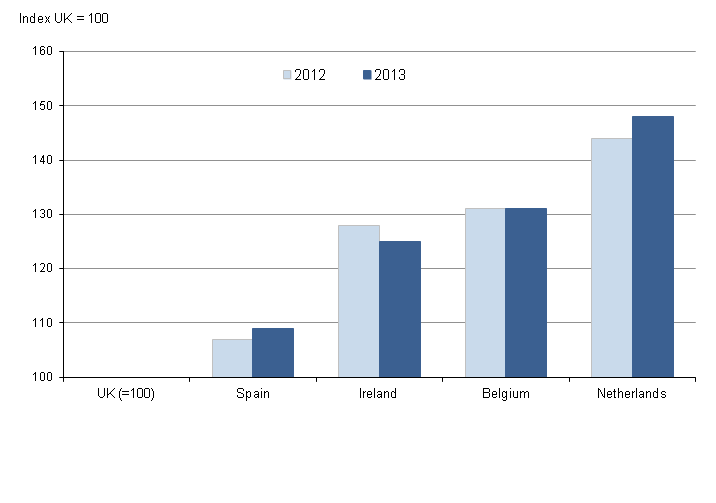 Constant price growth of output per hour for these additional countries is shown in figure 8, with UK growth included for comparison purposes. These series can be compared with the G7 estimates in Table 3. Figure 8 shows that since the economic downturn Spain, Netherlands and Ireland have experienced relatively rapid growth in output per hour.

In the case of Spain this is in sharp contrast to the very sluggish trend in productivity over the period 1997-2007. Indeed, the Spanish productivity gap in 2013 calculated on the same simplistic basis as for the G7 countries was minus 10% (that is, productivity was 10% above an extrapolation of the pre-downturn trend).

Output per hour in Ireland grew at a broadly similar average rate to that of the UK over the period 1997-2007. But as can be seen in figure 8 the recovery in productivity in Ireland since the downturn has been much more pronounced, resulting in a smaller productivity gap of around 7%.

Historical data used in this publication are subject to revision between publications. Tables R1 to R4 in the reference table (219 Kb Excel sheet) component of this release and at the back of the PDF version of this statistical bulletin compare the latest estimates with estimates from the previous release on 17 October 2014. Note that because Tables 1 and 2 are indexed to UK=100, revisions to the UK are zero by definition in Tables R1 and R2.

The main revisions are as follows:

There are no revisions to employment and hours worked in the G7 countries in this release.