Output is measured by gross domestic product (GDP). Labour input is measured in two ways – by total hours worked and by numbers of workers in employment. These two measures of labour input can yield different results, reflecting differences in working patterns across countries and compositional movements over time, such as a shift towards part-time working.

Comparability across countries is achieved by converting local currency based measures of GDP using purchasing power parity (PPP) exchange rates. PPP exchange rates (usually referred to simply as PPPs) attempt to equalise the cost of a representative basket of goods and services in countries with different national currencies. An ONS article explaining the uses and limitations of PPPs (246.1 Kb Pdf) is available on our website.

The estimates in this release update those published on 18 September 2013. This release cycle reflects the publication and revision cycles of the component data series.

This release includes productivity comparisons between the UK and the Netherlands, Spain, Ireland and Belgium, which were previously included in the February 2013 release. The data for these countries has been updated to 2012. Along with the G7 countries, these economies in total account for over half of the UK’s exports and imports.

In interpreting these estimates users should bear in mind that PPPs provide only an approximate conversion from national currencies and may not fully reflect national differences in the composition of a representative basket of goods and services. Additionally, care should be taken in interpreting movements in current price productivity estimates over time. For example, an increase in UK productivity relative to another country could be due to UK productivity growing faster, or falling less, or due to changes in relative prices in the two countries, or some combination of these movements.

Current price productivity estimates allow for comparison of how much economic output, measured in common currency terms, is produced by each worker and hour worked across countries in a particular year, relative to the UK=100. Further information is available in Tables 1 and 2 in the reference table (165 Kb Excel sheet) component of this release and at the back of the PDF version of this statistical bulletin. 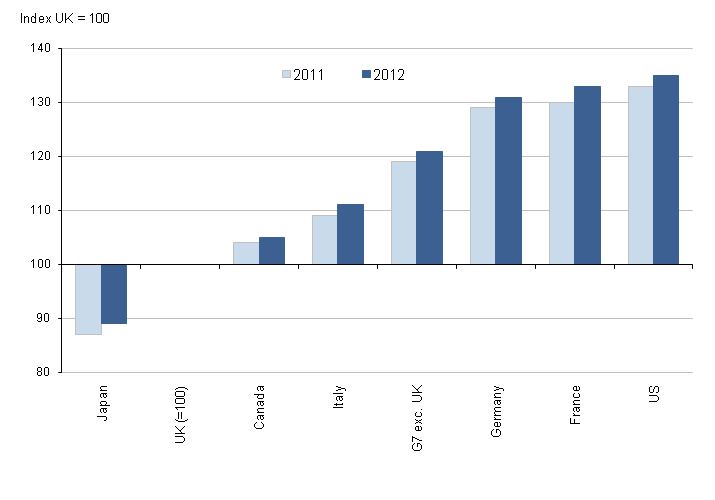 Comparing 2012 with 2011, the UK productivity shortfalls relative to Canada, France, Germany, Italy and the US all widened, and the UK productivity lead over Japan narrowed by 2 percentage points. The difference in productivity on this measure between the UK and the rest of the G7 widened to the greatest differential since 1992.

Final estimates for 2012 show that UK output per worker was: 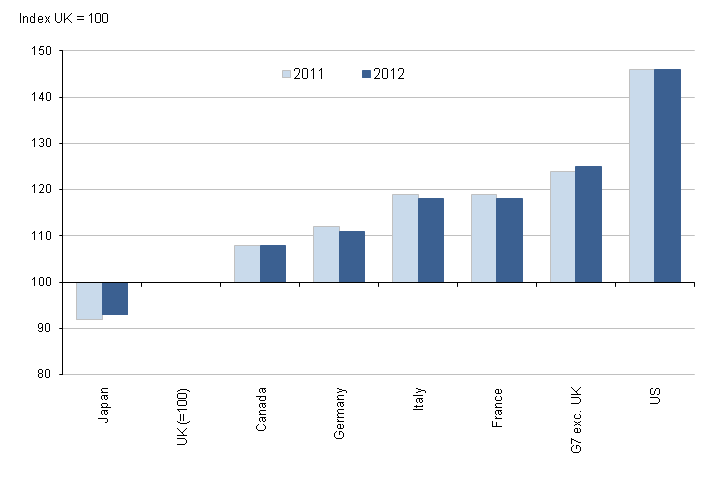 Comparing 2012 with 2011, the shortfall between output per worker in the UK and the rest of the G7 increased by 1 percentage point, while the UK’s lead over Japan on this measure narrowed to the smallest margin since 1997.

Constant price productivity estimates are indexed to 2007=100 and show the evolution of labour productivity for each country and group of countries over time. Further information is available in Tables 3 and 4 in the reference table (165 Kb Excel sheet) component of this release and at the back of the PDF version of this statistical bulletin.

Figure 4 shows GDP per hour worked for the UK and an aggregated series for the rest of the G7, together with simple projections based on average productivity growth over 1997-2007, that is, before the global economic downturn. On this basis, the combination of strong UK productivity growth up to 2007 and weak productivity performance since 2007 implies a productivity gap of 16 percentage points in 2012. This has been referred to as the 'productivity conundrum', and is discussed further in articles published by ONS in August 2012 and October 2012.

Average annual productivity growth between 1997 and 2007 for the rest of the G7 was lower than in the UK (around 1.9%, compared with 2.5% for the UK), and productivity performance since 2007 has on average been somewhat stronger, implying a smaller productivity gap of around 5 percentage points on the same basis.

Figure 5 illustrates the difference in productivity trajectories over recent years between the main European economies on the one hand, and North America and Japan on the other hand. Output per hour fell sharply in most countries over the 2008-09 downturn, but then rebounded sharply in Japan, Canada and especially the US, whereas the recovery in productivity has been much more muted for the main European economies.

Figure 6 shows data for Spain, Belgium, the Netherlands and Ireland on a current price output per hour basis, comparable with the G7 estimates in Figure 1 and Table 1. Figure 6 shows UK output per hour slightly lower than Spain, but much larger shortfalls relative to Belgium, the Netherlands and especially Ireland, where the gap was some 53 percentage points in 2012. The productivity gap between the UK and Ireland has grown over time as the Irish economy grew very strongly from the mid 1990s up to the onset of the recession in 2008. But according to the OECD data on which these estimates are based, Irish output per hour was higher than that in the UK even in 1990. 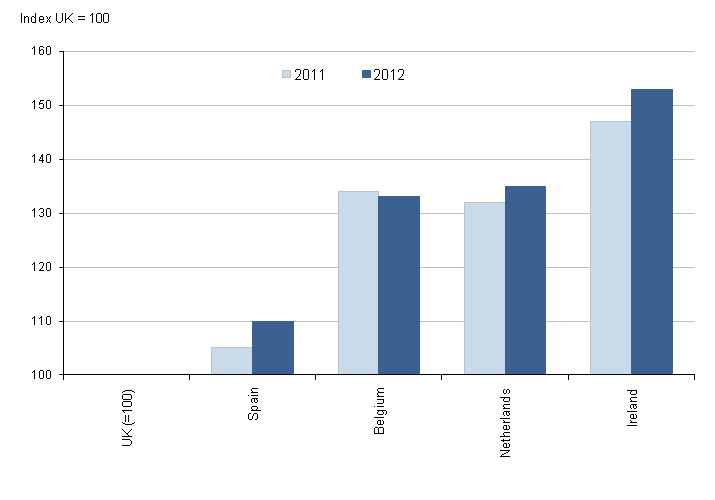 Constant price growth of output per hour for these additional countries is shown in Figure 7. These series can be compared with the G7 estimates in Figure 4 and Table 3. Figure 7 shows that output per hour growth in Belgium and the Netherlands since the trough of the downturn in 2009 has been fairly weak. By contrast however, the 2008-09 economic downturn seems to have had little impact on output per hour growth in Ireland, and average growth in Spain has been around three times stronger since the downturn than over the previous decade. In both cases this reflects large-scale labour shedding as economic output fell. Between 2007 and 2012, total hours worked fell by around 20% in Ireland and 14% in Spain, compared with a fall of 1% in hours worked in the Netherlands and an increase of 4% in Belgium.

Historical data used in this publication are subject to revision between publications. Since the First Estimates for 2012 were published on 18 September 2013, the main revisions have been to PPP exchange rates. These are re-benchmarked every three years and the PPPs in this release are now benchmarked to 2011 rather than 2008 as in the previous release. Additionally historic PPPs have been revised as part of OECD’s regular revisions process.

Tables R1 to R4 in the reference table (165 Kb Excel sheet) component of this release and at the back of the PDF version of this statistical bulletin compare the latest estimates data with the data from the previous release on 18 September 2013. Note that because Tables 1 and 2 are indexed to UK=100, revisions to the UK are zero by definition in Tables R1 and R2. The large revisions to other countries estimates for 2010-12 in these tables reflect the combination of revisions to PPPs noted above. Revisions in the early years in these tables primarily reflect historic revisions to the US GDP deflator. There are no significant revisions to constant price productivity (Tables R3 and R4).