The article explains the main methodological and presentational improvements to the latest Labour productivity bulletin that will be published in October 2018.

Labour productivity represents the amount of economic output per unit of labour input, for the whole economy, or a particular industry, or region, and so forth. For our headline measure, output per hour, we measure economic output in terms of gross value added (GVA) and we measure labour input in terms of the total hours worked, which we refer to as productivity hours.

Currently we publish as National Statistics output per hour worked and per job by over 10 manufacturing industry groups, 11 services industry groups, agriculture and construction, in addition to 13 regions of the UK. Our Experimental Statistics include datasets of output per hour and productivity hours by two digits SIC, by industry and regional combinations and Nomenclature of Territorial Units for Statistics: NUTS1 regions and sectional unit labour costs.

Improvements to labour productivity are part of the suite of productivity improvements as explained in the productivity development plan, which was developed to address the growing empirical challenges in better understanding the underlying movements in official statistics arising from the 2016 Bean review.

These improvements better utilise the data sources used to compile the low level of industrial granularity of around 80 industries, which comprise a mix of predominantly divisional-level estimates from the Standard Industrial Classification (SIC 2007).

The changes to productivity hours include:

The changes to productivity hours were discussed in user group meetings held in March 2017 and March 2018 and have been endorsed by users.

The most substantive change will implement a new treatment of industry data prior to 2009. The labour productivity time series generally span from 1994 onwards. To calculate productivity hours by industry prior to 2009, LFS data based on the older Standard Industrial Classification: SIC 1992 four-digit industrial classification scheme is mapped into the more recent SIC 2007 two-digit industry categories that have been used since 2009. Currently estimates use a simplistic one-to-one mapping for the industry sections (one-digit SIC 2007 codes) published in the LPROD01 dataset. However, a more appropriate proportional mapping scheme for higher-granularity industry divisions (two-digit SIC 2007 codes) is currently used in the compilation process of the experimental divisional dataset.

With the one-to-one mapping system, data for each SIC 1992 category are mapped to a single SIC 2007 category. This works reasonably well when data are pooled into higher-level industry aggregations, but can produce anomalies in time series for more detailed industry breakdowns. For example, some two-digit SIC 2007 categories have no SIC 1992 categories mapped to them. For this reason, the experimental estimates of labour productivity by industry division use a proportional scheme that maps data from each SIC 1992 category into many SIC 2007 categories in proportion, based on LFS respondents who contributed data for both mapping schemes in 2008 and 2009. This proportional mapping scheme is described in Division level labour productivity estimates: February 2018.

Previously, section-level productivity hours were used to constrain the lower divisional-level industry categories. For example, the sum of divisional level industries 41-Construction of Buildings, 42-Civil Engineering and 43-Specialised Construction Activities were constrained to the total values of Construction, which is section level F. Now, section-level productivity hours will be calculated by aggregating hours from the lower division-level industry categories.

The change takes into account industry splits that are sourced from business data sources, which are a better quality than those sourced from the LFS. Therefore, when aggregating the divisional-level industry categories to the section-level we utilise better quality data from business data sources such as the Short Term Employment Survey (STES). For time periods prior to 2009, these data will be based on proportional mapping from SIC 1992 to SIC 2007 classifications. There is an indicative comparison of one-to-one mapping and proportional mapping for jobs by industry section in the publication March 2018 Productivity User Group - Illustrative example of current and proposed labour productivity hours mapping methodology (UK, 2008). The move to proportional mapping of industry classifications will affect the distribution of hours across industries, but only for time periods prior to 2009.

Consistency across different levels of industry aggregation will be ensured by calculating average LFS hours per job at a low level of aggregation (typically two-digit SIC 2007 divisions) and then adding up total hours across these lower-level categories to estimate total productivity hours for higher levels of aggregation (one-digit industry sections). Previously, average hours for employees were calculated independently at different levels of aggregation and then multiplied by the appropriate number of jobs to arrive at total employee hours for each industry category; this could distort the relative sizes of low-level categories if they were components of different higher-level categories. The move to aggregate up from lower-level estimates will affect all time periods from 1994 to the present.

For mining of metal ores (SIC 2007 industry 07), from Quarter 2 (Apr to June) 2018 onwards, LFS hours and jobs in industry 07 will be distributed in proportion across the other divisions within section B (mining and quarrying). This will resolve a minor discrepancy between data sources, because although LFS has some respondents identified as working in industry 07, the national accounts do not attribute any gross value added (GVA) to this industry. Previously, self-employed hours were re-allocated within section B, while employee hours in industry 07 were indirectly re-allocated in proportion across all other industries (because the distribution of hours across industries is constrained by the whole-economy number of hours worked).

Several additional improvements will take into account data that were previously ignored in the calculation of productivity hours. These data include a small fraction of responses from the LFS where there was a missing full-time or part-time code for a respondent’s main job, or where a second job reported exactly 30.5 hours. Also, calculations of productivity hours previously did not include variation from year to year in average hours worked by military personnel. From Quarter 2 2018, productivity hours will incorporate a time series of average hours for military personnel sourced from the Ministry of Defence’s Continuous Working Patterns Survey. Together, these changes will affect the distribution of hours across industries for all types of workers.

All time periods will be affected by a seasonal adjustment review, where seasonal adjustment is applied. Finally, we will be including regular commentary in the labour productivity statistical bulletin on the Experimental Statistics we have been publishing on a quarterly basis since July 2017. They will include output per hour and per job as well as productivity hours and jobs by a lower level of industry classifications and by industry and regional combinations, as well as contributions to labour productivity and sectional unit labour costs. A high-level revisions analysis will be published in January 2019 for these datasets.

The methodological improvements described in Section 3 will affect estimates of the distribution of hours worked across various industries. However, the revised distribution of hours will continue to add up to the same number of total hours worked across the whole economy. The changes will therefore have no effect on the estimate of whole-economy productivity, except for the possibility of modest effects on quarterly estimates due to seasonal adjustment.

The changes in methodology generally produce modest changes in the levels of productivity hours within industries, but leave patterns of growth largely unchanged. As an indicative estimate of the magnitude of revisions from the changes in methodology, Figure 1 shows approximate average revisions to shares of hours worked for time periods from 2009 onwards, dividing the economy into five major sectors. These time periods are not affected by the new proportional mapping of industry classifications from Standard Industrial Classification: SIC 1992 to SIC 2007, but they are affected by the other methodology changes. The height of the bars in the figure schematically indicates the relative size of each sector as measured by annual hours worked.

Out of the 50 billion hours worked each year in this time period, about 23 million hours (0.05%) will be re-allocated across these five categories by the methodological changes. Time series revisions will vary slightly from year to year, but because we report labour productivity to one decimal place, these changes will have no significant effect on industry breakdowns.

Non-financial services (comprising industries G to U but excluding K) will have the greatest increase in estimated hours worked, with its share of hours increasing by about 0.04 percentage points on average between 2009 and 2017.

Non-manufacturing production (industries A, B, D and E) will remain virtually unchanged in its share of total hours worked.

Construction (industry F) will see its share of hours worked decrease by about 0.01 percentage points.

Finally, manufacturing (industry C) will have a greater reduction of about 0.03 percentage points. 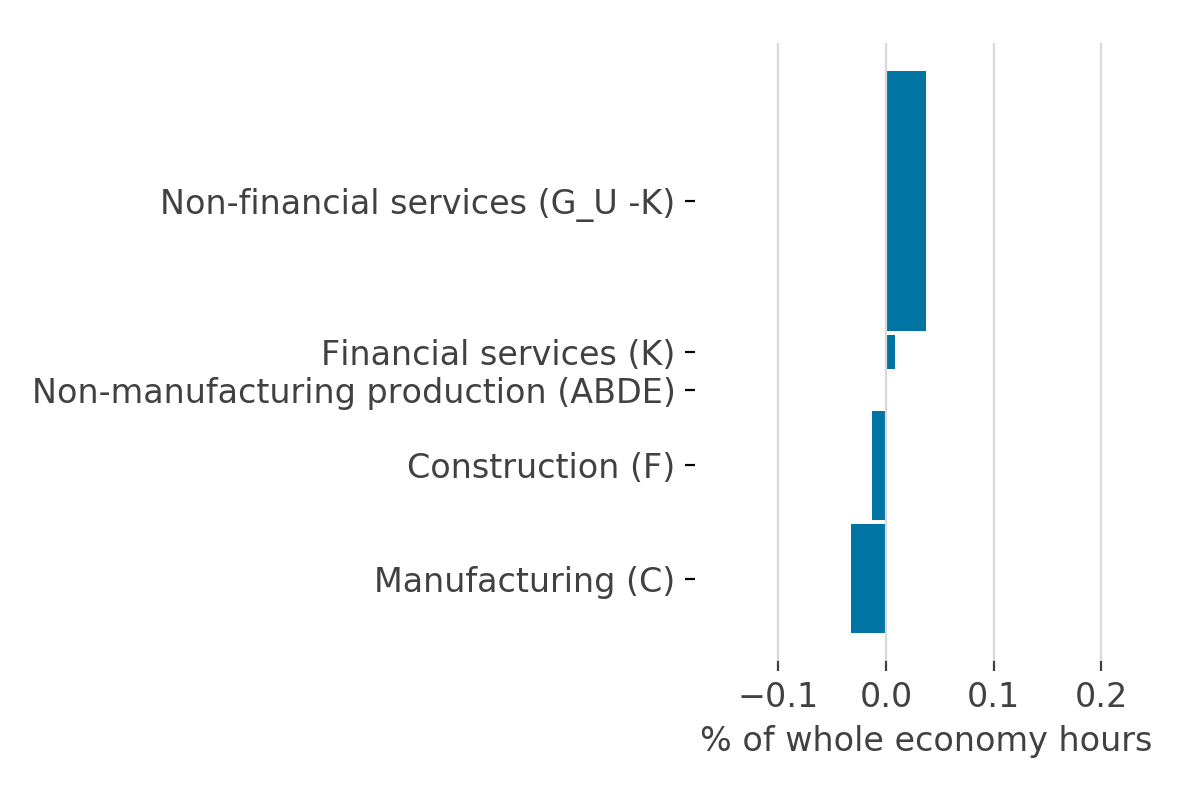 Compared with 2009 onwards, revisions will be larger for time periods prior to 2009, because the new proportional mapping of industry classifications applies to the sectional industry level, which was previously used to constrain the divisional industry-level data. The other methodological changes will also affect these time periods. Figure 2 shows approximate average revisions to share of annual hours worked for time periods from 1994 to 2008.

Out of the 47 billion hours worked each year in this period, about 114 million hours (0.24%) will be reallocated across these five categories by the methodological changes.

Again, non-financial services will have the greatest increase, with its share of hours worked increasing by about 0.23 percentage points on average.

Financial services will see a smaller increase of about 0.01 percentage points.

Non-manufacturing production will see a reduction in its share of total hours worked of about 0.02 percentage points.

Construction (industry F) will see its share of hours worked decrease by about 0.06 percentage points.

Finally, manufacturing (industry C) will have the greatest reduction of about 0.16 percentage points.

Figure 2: Indicative revisions to distribution of productivity hours: 1994 to 2008 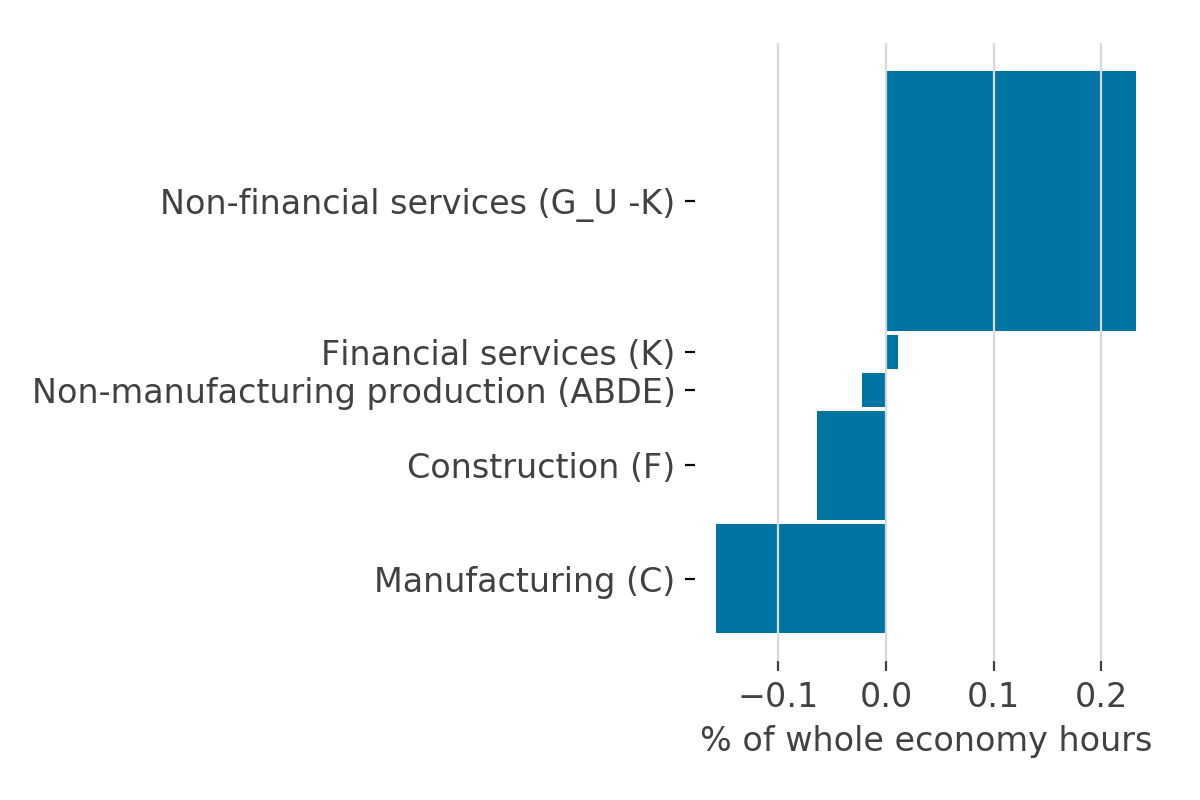 Download this image Figure 2: Indicative revisions to distribution of productivity hours: 1994 to 2008

Labour productivity statistics have seen significant improvements over the last two years in both methodological systems and new datasets. As part of our aim to meet growing user needs, we have announced four core areas of improvements in the productivity development plan.

These include developing regular labour productivity data for the real estate industry excluding imputed rental and completing two feasibility studies to explore whether we can include a broad 10-industry breakdown in our flash estimate of labour productivity and to extend our existing industry-level contributions to productivity growth from a high-level industry breakdown, to the more granular, divisional level. The work also includes our plans to introduce quarterly regional labour productivity estimates to enable users to trace the productivity of regions in a more timely fashion. We also plan to improve our methodology for estimating workers by industry – currently supplied to Eurostat each quarter – to make greater use of microdata and to make the process more succinct.

We are also planning to improve the badging and publication of our new labour productivity statistics and we would like to incorporate the many experimental outputs that we currently produce and enlarge the dataset of labour productivity National Statistics.

If you would like further information on this article and labour productivity please contact us at productivity@ons.gov.uk

The authors of this paper would like to thank Richard Heys, Katherine Kent, Josh Martin and Ciaren Taylor for their input and feedback in producing this article.