The most recent estimates gathered by the Office for National Statistics from more than 23,000 firms suggest that the output of the services sector – which accounts for three quarters of the economy – grew strongly in July 2016 - up 0.4% from June 2016.

While ONS always warns against focusing too much on month-on-month growth rates, this fresh data on the service sector1 tends to support the view that there has been no sign of an immediate shock to the economy, following the vote to leave the European Union, although the full picture will continue to emerge.

Alongside today’s release, here are five key things you need to know about the UK service sector and its importance to the UK economy.

This has increased from 46% in 1948. Over the same period the share of GDP from production and agriculture has decreased, while the share of construction has remained broadly unchanged.

Percentage of GDP coming from the services, production, agriculture and construction sectors, UK, 1948 and 20132

Taking a look at census data for England and Wales, the nature of the labour market has changed considerably over the last 170 years. In 1841 most people worked in manufacturing, but by 1881 those working in services overtook manufacturing. By 2011, around 80% of workers were in the service industry and around 10% in manufacturing.

Percentage of the labour force working in each sector of the economy, England and Wales, 1841 to 2011

Note: The data used here is for every 10 years since 1841, excluding 1941 and 1971. There was no census recorded in 1941 and information for 1971 is not included due to inconsistent industrial classification.

91% of London’s economy is in the service sector, higher than all other areas of the UK.

Percentage of each area’s economy that is in the service sector, UK, 2014 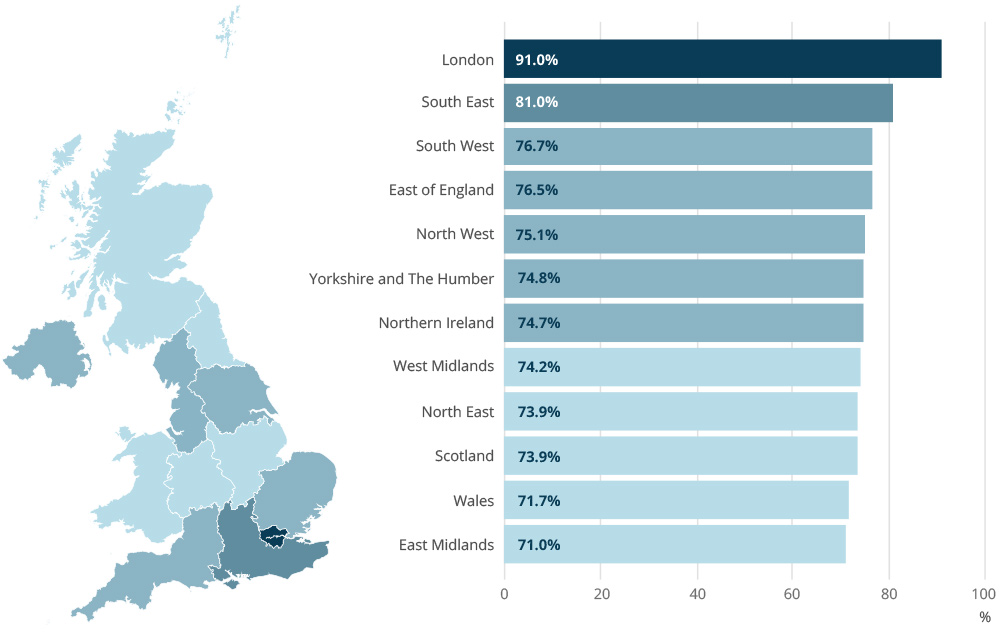 4. The UK's economy is more reliant on the service sector than any other G7 country

While our reliance is similar to that of France and the USA, we differ from Germany where a lower proportion (69%) of GDP came from the service sector in 2014.

Percentage of each country's GDP that comes from the service sector, G7 countries, 2014

5. The service sector has driven the economic recovery since the downturn in 2008

Four main sectors feed into UK GDP - agriculture, construction, production and services. Out of these, the service sector was the first to recover after the economic downturn in 2008.

To consider the growth of a sector over time, index numbers are used instead of volume or value figures. The index number for services was at 111.2 in April to June 2016, up from 100 in January to March 2008 – this means the service sector grew 11.2% over this period.

In comparison, the index numbers for the production and construction sectors in April to June 2016 were 92.6 and 97.9 respectively. As these are less than 100, it means the output for these sectors has not yet returned to their pre-downturn levels.

Whenever we have referred to UK GDP in this article we have referred to the output measure of UK GDP. Components of this measure (services, production, construction and agriculture) are measured as Gross Value Added (GVA) which is used as proxy for GDP.