Are we training enough people to become programmers?

In 2012, it was decided that computing should be introduced as a GCSE, in an attempt to revive the legacy of mathematician and wartime codebreaker Alan Turing. Computing would focus more on building programs and learning to code, rather than learning the basics of using computers, which is what the already-existing ICT GCSE was focused on.

While the old ICT GCSE is now being phased out, with the last batch of pupils taking their exams next year, there are concerns that the new Computing GCSE is not popular enough.

The British Computing Society has voiced its worry that a lack of interest in the topic at this level will lead to a shortage of skilled workers in this growing industry in future. The latest figures show that while the number of pupils taking Computing at GCSE is growing, insufficient numbers are signing up to meet future demand in the workforce.

The number of pupils taking ICT and Computing GCSE exams, 2014 to 2017 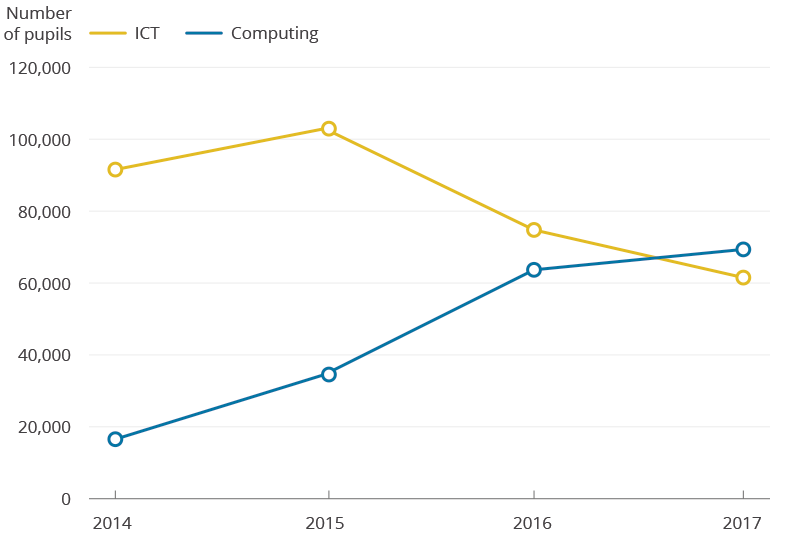 Additionally there appears to be a perception problem among young girls who are seemingly avoiding the new GCSE.

Computing in the economy

IT contributed nearly £55 billion to the UK economy in 2016, according to GVA figures. Its contribution has quadrupled since 1990.IT makes up 4% of the UK service economy, 3% of the whole economy.

The UK is a net exporter of computer services.

The jobs market for ICT and telecommunications professionals has been buoyant for some years and continues to be so.

Since computing was introduced as a GCSE topic, in 2012, there has been a 19% increase in people in employment in the industry.