The European City Statistics project was first set up in the 1990s as a pilot project, in a co-operative action between Eurostat and the Directorate-General for Regional and Urban Policy (DG Regio). Since then, the data collected have become a significant source of information for important policy decisions by the European Union. The city definitions are a joint initiative between the EU and the Organisation for Economic Co-operation and Development (OECD) and are also used for global comparisons.

More information on European City Statistics is available on the Eurostat website.

The Office for National Statistics is responsible for:

The European City Statistics project provides reliable and comparable information on a range of indicators covering most aspects relating to quality of life in cities in the EU, as well as Norway, Switzerland and Turkey. More than 100 variables are collected across a range of themes and many derived indicators and data can be downloaded from the Eurostat website.

The European City Statistics project collects comparable statistics at the European level on many topics at three spatial levels:

More than 900 towns and cities are covered by the European City Statistics project across the EU member states, as well as Norway, Switzerland and Turkey. There are 170 core cities in the UK, 19 greater cities and 46 functional urban areas. All boundaries align with whole groups of local authorities in England and Wales, Council Areas in Scotland and Local Government Districts in Northern Ireland. 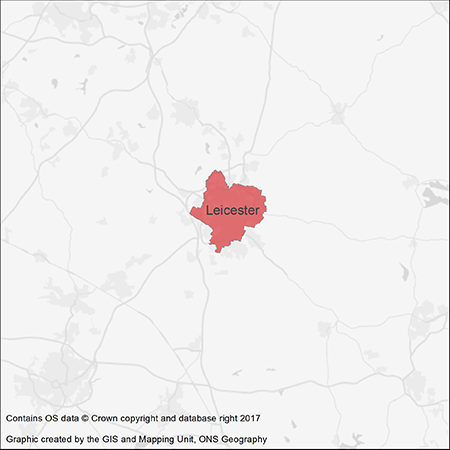 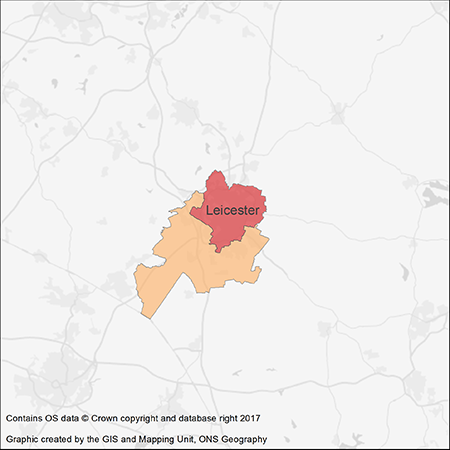 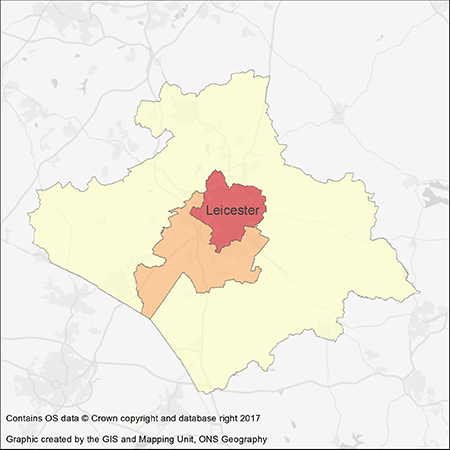 Data are currently being collected for 2017 and 2018 and are published through the Eurostat website. A walkthrough on how to access and download data is available for users. Also, data published on the Eurostat website can be visualised through City Statistics Illustrated, which is an interactive tool that displays city data grouped into different statistical domains. 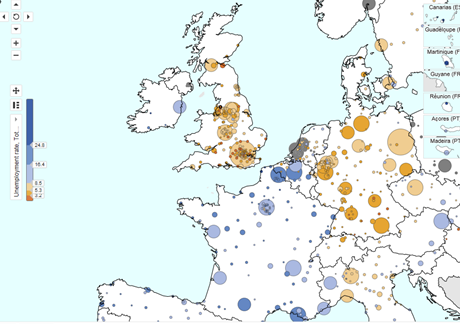 Download this image Figure 2a: Examples of City Statistics Illustrated 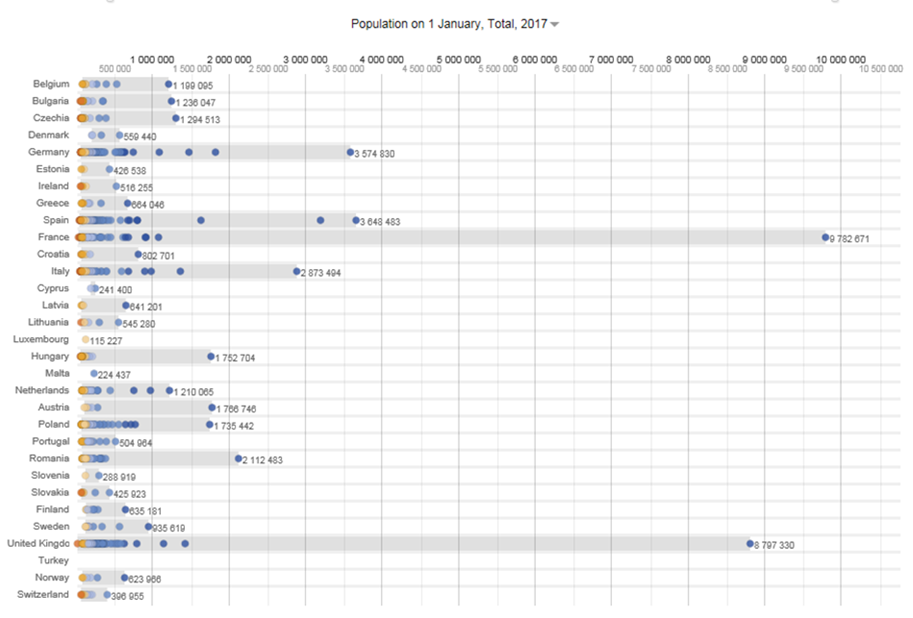 Download this image Figure 2b: Examples of City Statistics Illustrated

Information about the European City Statistics project can be found on the Eurostat website where you can also download city data on a variety of themes.

The Office for National Statistics is responsible for maintaining the Nomenclature of Territorial Units for Statistics (NUTS) framework, on behalf of the UK. We work in close cooperation with the devolved administrations of Wales, Scotland and Northern Ireland, as well as across the Government Statistical Service (GSS), which represents other government departments responsible for NUTS data collection.

The NUTS classification is defined only for the member states of the EU. Eurostat, in agreement with the countries concerned, also defines a coding of statistical regions for countries that do not belong to the EU but are either candidate countries awaiting accession to the EU, potential candidates or countries belonging to the European Free Trade Association (EFTA).

The NUTS regulation (Regulation (EC) No 1059/2003) underpins major regional development funding by the EU. It provides a statistical framework for the production of harmonised European subnational statistics to support funding and development decisions.

Data collection for the NUTS areas is undertaken by national statistical institutes and supplied to Eurostat, the statistical office of the European Union, under regulation. All data are comparable across countries and are validated before publication on the Eurostat website.

For practical reasons the NUTS classification generally mirrors the territorial administrative division of the EU member states. This supports the availability of data and the implementation of policy. The NUTS regulation defines minimum and maximum population thresholds for the size of the NUTS regions.

Download this table Relationship of NUTS to UK administrative areas, 2018

Within NUTS 3 areas there are smaller “local administrative units” (LAUs). In the UK this level is known as LAU 1. It is a Eurostat entity and a “snapshot”, rather than a real-time reflection of UK local authority boundaries. A second level, LAU 2, was withdrawn from operation in 2017 and is no longer used by Eurostat for statistical purposes.

In England and Wales, LAU 1s are based on local authority districts, in Scotland they are based on Council Areas and in Northern Ireland they are whole Local Government Districts. There may not be complete alignment, however, as the update of the NUTS geography every three years can result in a time lag. Similarly, there may be policy or cultural reasons for an LAU 1 to align with a particular European NUTS area. This can result in local authorities that do not sit perfectly within NUTS 3 areas. In the UK we see this in Scotland in the following areas, where the LAU 1s nest within the NUTS 3 areas, but three Council Areas are split across NUTS 3 areas: Argyll and Bute, Highland, and North Ayrshire.

Eurostat publish guidance and supporting geography files for the NUTS framework. The Office for National Statistics (ONS) also supports UK statistics producers with a set of products based on British National Grid.

The typologies associated with regions across Europe are managed through regulation, known as “TERCET”, an extension of the NUTS framework. The definitions have been agreed by national governments through a legal process that, in the UK, includes scrutiny by policy departments, devolved administrations and the UK Parliament, before implementation by the EU institutions.

When changes are suggested, either by Eurostat running an automated methodological process, or because of local change, the UK can review these in cooperation with Eurostat. The ONS works with Eurostat and consults with relevant UK policy departments and the devolved administrations if changes are being considered. In practical terms the definitions are applied at local authority level in the UK, which means that the typologies are stable, with infrequent change.

The Degree of Urbanisation (DEGURBA) is a classification that indicates the character of an area. The methodology uses a 1 kilometre2 population grid to classify LAUs into three categories, based on population density and proximity criteria. There are three types of area:

The commuting zone of a city is represented by its Functional Urban Area (FUA), an important geography within the European Cities methodology. The definition is jointly developed and owned by the EU and the Organisation for Economic Co-operation and Development (OECD).

A city is firstly identified using the DEGURBA methodology – these areas are the core cities that feature in the European Cities methodology. Then local administrative areas (LAU 1s) with at least 15% of their population commuting into the city are merged with the core city to make an area that reflects the city with its commuting zone. There are 46 FUAs in the UK.

FUAs with a population of 250,000 or more are identified as “Metropolitan Areas” by the OECD. This means that all 46 UK FUAs are included in the OECD definition. They are, however, different from the Metropolitan Regions defined by the EU and should not be confused.

The EU Metropolitan Region typology is based on FUAs of 250,000 people or more – these are then matched to NUTS 3 areas.

Based on the population grid described in the DEGURBA section this methodology classifies Urban-Rural NUTS 3 areas into three categories:

At NUTS 3 level, the EU identifies coastal regions as those that have a border with a coastline, have more than half their population within 50 kilometres of the coastline, or have a strong maritime influence. At LAU level, areas are classified as coastal when they border the coastline or have at least 50% of their surface area within a distance of 10 kilometres from the coastline.

Regions within the 36 Organisation for Economic Co-operation and Development (OECD) member countries are classified by the OECD into two territorial levels that reflect the administrative organisation of countries.

The 393 OECD large (TL2) regions represent the first administrative tier of subnational government. The 2,256 OECD small (TL3) regions usually correspond to administrative regions. These TL3 regions are contained in a TL2 region. In the UK TL2 regions align with Nomenclature of Territorial Units for Statistics level 1 (NUTS 1) regions. TL3 regions align with NUTS 3 areas. The boundaries and codes are currently the same.

The OECD collect data from a range of sources on these areas, including from the Office for National Statistics (ONS). The statistics inform publications such as OECD Regions and Cities at a Glance and the Regional Outlook.

The OECD is joint owner of the Functional Urban Area definition (with the EU). FUAs with a population of 250,000 or more are identified as Metropolitan Areas by the OECD. This means that all 46 UK FUAs are included in the OECD definition. They are, however, different from the Metropolitan Regions defined by the EU and should not be confused.