Estimates of personal well-being, with analysis by country, region and local areas and individual characteristics such as age about personal quality of life.

Personal well-being provides an important insight into people’s thoughts and feelings about their quality of life. Its measurement forms part of a much wider initiative in the UK, and internationally, to look beyond Gross Domestic Product (GDP) and to measure what really matters to people.

Previous international comparisons have shown that generally people in the UK are reasonably content with their lives overall. Current average ratings for the 4 Office for National Statistics (ONS) measures of personal well-being are: 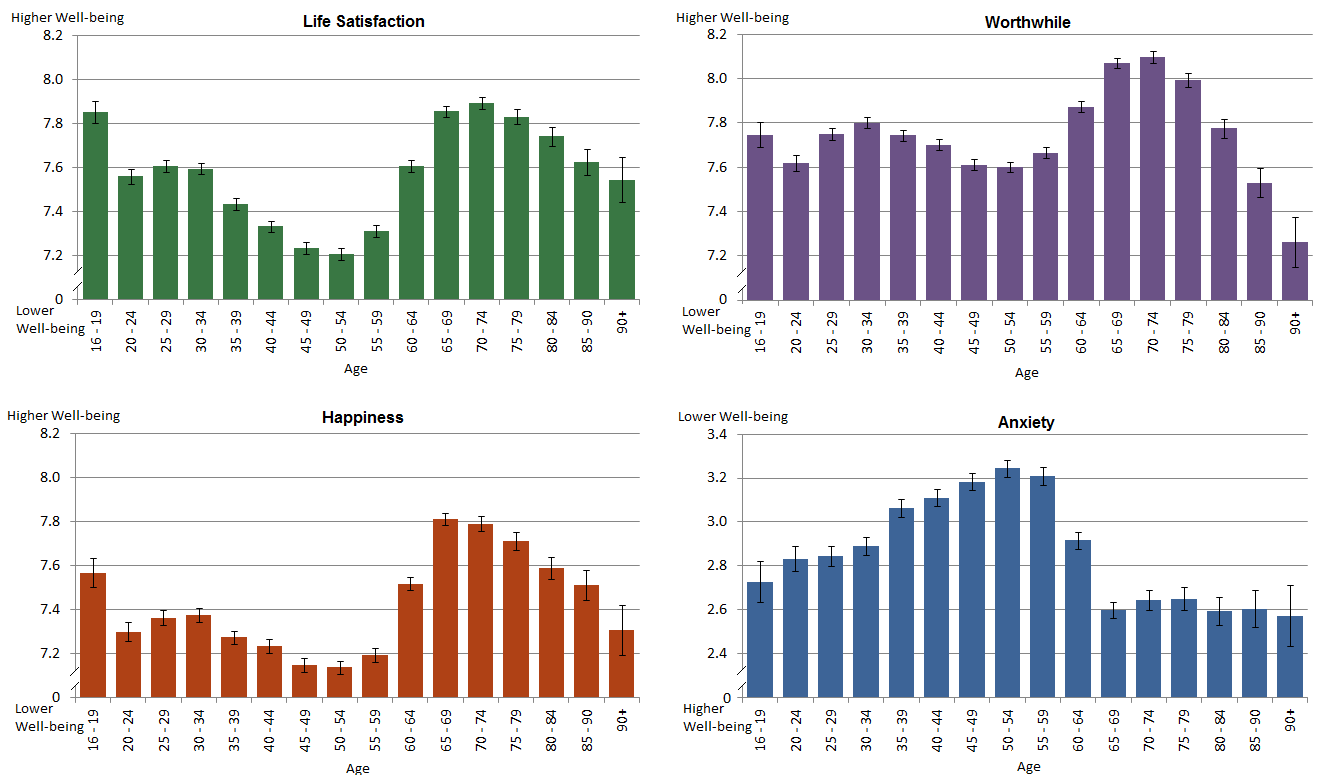 Considering the 4 measures in turn:

Is the relationship between age and personal well-being U-shaped?

Average ratings of anxiety increased progressively through early and middle years, peaking for the 45 to 59 year old age groups, but then subsequently falling and remaining relatively unchanged. The fall observed in anxiety coincides with a subsequent increase observed in each of the life satisfaction, happiness and worthwhile measures.

Why might ratings of personal well-being vary by age?

There are a number of possible explanations behind the differences observed in personal well-being between the different age groups. For example, results might be the consequence of a cohort effect, whereby people born in different eras will have had different experiences and expectations which will ultimately shape their sense of well-being.

Another explanation might be that our level of personal well-being changes as we move through our lives, have new experiences, and change the way we look at things.

The differences might also be driven by socio-economic factors. For example, those in their younger years and those who are retired may have more free time to spend on activities which promote their well-being. In contrast, those in their middle years may have more demands placed on their time and might struggle to balance work and family commitments. Evidence shows that people are having children later. Therefore another possible reason for lower scores for the middle age groups could result from the burden caused by having to care for both parents and children at the same time.

What happens to ratings of personal well-being for those aged 75 and over?

We know that the UK population is ageing. There were more than half a million people aged 90 and over living in the UK in 2014, almost triple the number 30 years ago. This shift towards an older population will impact on important policies and services including the labour market, pension provision, and health and social care demand. Understanding more about how the oldest age groups rate their personal well-being will help focus on issues that are fundamental to a good later life.

Average ratings of life satisfaction, a sense that what one does in life is worthwhile and happiness peak for those aged between 65 to 79 years, however scores for all 3 measures decline in later life. The extent of this decline in personal well-being ratings was largest for average feelings that what one does in life is worthwhile, where those aged 90 and above reported the lowest average worthwhile rating of all the age groups. This particular finding might have important implications for policy when considering provision of worthwhile building activities into care settings for the over 90s. Whilst ratings of life satisfaction and happiness also fall in later life, interestingly average ratings remain higher for those aged 90 and above compared with people in their middle years.

The fall in ratings of personal well-being amongst the oldest age groups might result from a range of personal circumstances such as poor health, living alone and feelings of loneliness. Self-reported health has one of the strongest associations with all the measures of personal well-being, with those reporting higher personal well-being tending to report better general health. As health problems generally develop with age, it is reasonable to expect that older people are less able to participate in activities as freely as they once were. The direction of the relationship between personal well-being and health could be either way. Therefore it is possible that creating interventions directed at improving well-being could also lead to improvements in the population’s general health.

Understanding more about how different age groups rate their personal well-being will help policy makers target groups in most need and concentrate on issues that are fundamental to a good life. For example, this analysis has identified the potential need for interventions for those aged over 90 in how they feel the things they do in life are worthwhile. This is especially important as we are now living longer and 1 in 3 of today’s babies will live to see their 100th birthday, according to latest estimates. The decline in all 4 ONS personal well-being measures for those in their middle years has also indicated that government, employers and businesses may have a role in improving the well-being of this group.

We have released maps with Personal Well-being data at local authority district level.

To explore the data and find out what personal well-being is like in your area please see our interactive maps. 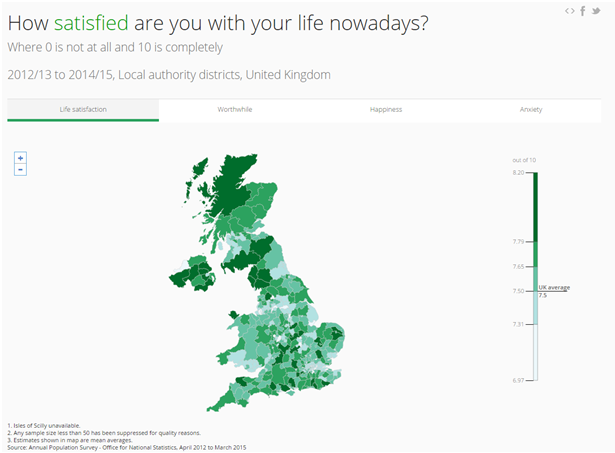