Occupational pension provision in the UK, providing summary data on membership of schemes and contributions paid.

The Occupational Pension Schemes Survey (OPSS) is an annual survey of occupational pension schemes, run by the Office for National Statistics (ONS). The survey was first undertaken in 1953, then in 1956 and 1963, and then every four to five years until 2004 when it became an annual survey. Until its transfer to ONS in 2006, OPSS was run by the Government Actuary’s Department (GAD).

OPSS does not cover state pensions or personal pensions, the latter being based on individuals entering into a contract with a pension provider. This exclusion extends to 'group' personal arrangements (GPPs, such as stakeholder and self-invested personal pensions), where the contract is facilitated by the employer(s).

ONS are currently exploring options for collecting data on GPPs and would welcome your views.

This bulletin provides summary data on membership of schemes and contributions paid. Further information from the survey is available in the associated reference tables (368 Kb Excel sheet) or on request. To assist users in their understanding of these data, pension definitions are included as part of the background notes of this release (section 3) with further detail in the Pension Trends glossary (198.9 Kb Pdf) .

ONS are always looking to refine the OPSS questionnaires to improve the estimates and capture data that reflects the changing pensions landscape. Some of the time series presented are therefore not directly comparable over time. If this is the case, caveats are included in the footnotes associated with the relevant chart or table.

Starting in October 2012, with gradual roll-out by 2018, all employers have a duty to automatically enrol eligible employees into a qualifying pension scheme and to make contributions on their behalf. Automatic enrolment is being introduced in stages, based on the size of the employers’ PAYE scheme as of 1 April 2012, commencing with the larger employers. Minimum contribution levels have also been introduced, in a phased process, again with full implementation by 2018.

The reference date for the survey is 6 April of a given year; as such, the 2013 results are the first OPSS estimates to be produced following the introduction of the reforms.

While reference is made to the reforms within this statistical bulletin (in the Active membership and Contribution rate sections), it should be noted that the phased implementation of the reforms was at an early stage at 6 April 2013. Also, the reforms are not happening in isolation and other factors (e.g. employment, disposable household income levels, attitudes to saving for retirement, etc.) would also affect membership and contribution rates1.

We are constantly aiming to improve this release and its associated commentary. We would welcome any feedback you might have, and would be particularly interested in knowing how you make use of these data to inform your work. Please contact us via email or telephone Hazel Clarke on +44 (0)1633 455633 or Fred Norris on +44 (0)1633 456109.

Total membership of occupational pension schemes consists of active members (current employees who would normally contribute), pensioner members (those receiving pension payments) and members with preserved pension entitlements (members who are no longer actively contributing into the scheme but have accrued rights that will come into payment at some point in the future).

Please note that individuals may have more than one of these types of membership. For example, an individual may be in receipt of a pension from a former employer but still working and contributing to a pension. This person would appear in both the pensioner and active member categories. Similarly, an individual might be working and contributing to a scheme while being entitled to a preserved pension from a previous employer’s scheme. This person would appear in both the active and preserved member categories. As such, all estimates of membership are not counts of individuals.

Figure 1: Number of members of occupational pension schemes by membership type, 1991 to 2013

Download this chart Figure 1: Number of members of occupational pension schemes by membership type, 1991 to 2013

The active members of an occupational pension scheme are those who are contributing to the scheme, or having contributions made on their behalf. They are usually current employees of the sponsoring employer. This release includes breakdowns of active membership by sector, benefit structure and status.

In 2013, there was a slight increase in active membership to 8.1 million active members following a slow but generally steady decline between 1991 and 2012. Figure 2 shows active membership rose between 2012 and 2013 in both the public (5.1 million to 5.3 million) and private (2.7 million to 2.8 million) sectors. This increase is likely to be due to the establishment of automatic enrolment (discussed within the 'Workplace pension reforms' and 'Background notes' sections).

Figure 2: Number of active members of occupational pension schemes by sector, 1953 to 2013

Download this chart Figure 2: Number of active members of occupational pension schemes by sector, 1953 to 2013

Active membership of private sector defined contribution (DC) schemes, which has remained around 1.0 million since 2006 (Figure 3), rose to 1.2 million in 2013 – driven by a rise in membership of open schemes (Figure 4). This is likely to be due to the reforms - DC schemes (along with group personal pensions), were seen as the most likely route for employers to meet their new obligations. This is because, in DB schemes, the employer bears the investment risk and must pay out pensions at the agreed rate, regardless of the returns made on the invested contributions. In contrast, for DC schemes, members bear the risks as there is no promised level of pension payment. DB schemes are therefore potentially less attractive to employers than providing a DC occupational or group personal pension (approaches to risk are discussed in Pension Trends Chapter 6). While employers could use existing, or new, DB schemes for automatic enrolment1, the minimum requirements for a qualifying scheme focussed on DC provision. A further reason DC membership was expected to rise was that the National Employment Savings Trust (NEST) was set up as a DC scheme. NEST is a qualifying pension scheme, established under the Pensions Act 2008, to support the introduction of automatic enrolment. Since the reforms began, various 'master trust' arrangements have also become important players in the pensions market – again with provision typically on a DC basis. Master trusts are where a provider manages a pension scheme for multiple employers under a single trust arrangement (see examples on the National Association of Pension Funds website). 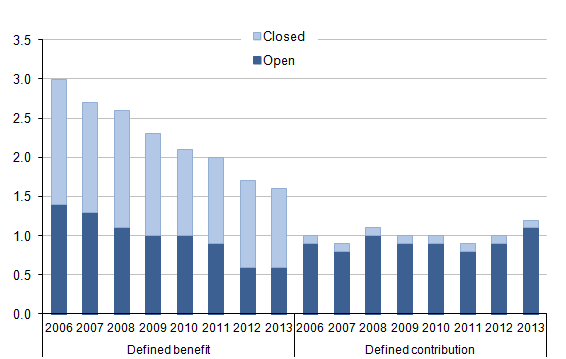 Download this image Figure 4: Number of active members of private sector occupational pension schemes by status and benefit structure, 2006 to 2013

While it is not a direct comparison (for reasons mentioned above and that people move between sectors, change employers etc.), the increase in active membership in the 1950s and 1960s (Figure 2) should be broadly reflected in the current pensions in payment figures (Figure 5), as that cohort of employees reaches retirement age. While changes to methodology mean that comparisons over time should be treated with caution, the total number of occupational pensions in payment has risen, from 0.9 million in 1953 to 9.6 million in 2013. Estimates of pensions in payment in the public and private sectors both rose over the period, reaching 4.4 million and 5.2 million respectively in 2013 (Figure 5).

Figure 5: Number of pensions in payment for occupational pension schemes by sector, 1953 to 2013

Download this chart Figure 5: Number of pensions in payment for occupational pension schemes by sector, 1953 to 2013

Future analysis of preserved pension entitlements may be affected by automatic enrolment. For example, if employers close existing schemes and move all their eligible employees to a new scheme based on the automatic enrolment qualifying criteria, these employees will appear in the estimates of both active and preserved members.

Figure 6: Number of preserved pension entitlements in occupational pension schemes by sector, 1991 to 2013

Download this chart Figure 6: Number of preserved pension entitlements in occupational pension schemes by sector, 1991 to 2013

Contribution rate questions are only asked of OPSS survey respondents in the private sector. Information on rates in the public sector is not collected as it is already available, e.g. from the Annual Survey of Hours and Earnings (ASHE)1 or from published individual scheme resource accounts.

Figure 8 shows that, between 2011 and 2013, employer rates for defined benefit schemes have risen slightly, from 14.2% to 15.4% of pensionable earnings. Although deficit reduction payments as single payments are excluded from the estimates, it may be that schemes increase their regular contribution rates in order to minimise deficits and/or the risk of falling into deficit. Pension Protection Fund (PPF) estimates of DB scheme liabilities have increased over the last few years (Table 4.2 of the Purple Book 2013), suggesting schemes may need to consider raising regular contribution rates. Increasing liabilities could be linked to several factors such as ageing population and influenced by the returns on investment in gilts (see Investment by insurance companies, pension funds and trusts and Trends in gilts investment).

As part of the workplace pension reforms, minimum levels for employer and employee contributions will be phased in over the period to 2018 (see Background Notes - 2.Workplace pension reforms). While it is not possible to isolate the effect of these reforms, the fall in average employer contribution rates for defined contribution schemes (6.6% in 2012 to 6.1% in 2013, see Figure 8) may be linked to this policy change as an increase in the number of new members starting on the minimum rates would pull down the average rate. The fall may also be due to employers reducing contributions into existing pensions – referred to as ‘levelling down’. Further analysis of contribution rates, from OPSS and other sources, is produced in Pension Trends Chapter 8: Pension Contributions, an update of this will be available through the Pension Trends release page. 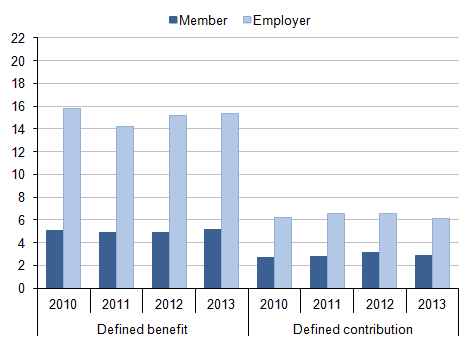