The House Price Statistics for Small Areas (HPSSAs) use data from the Land Registry (LR) to provide statistics on the price paid and composition of residential property transactions for properties that were sold in England and Wales. Properties sold at a discount to market level, such as properties sold under the Right to Buy scheme, are excluded from the data.

The entire series of data in the HPSSAs (back to year ending December 1995) is revised quarterly and these data supersede all previously published HPSSA data, to ensure that:

The smallest areas for which statistics are presented are middle layer super output areas (MSOAs), of which there are 7,201 in England and Wales, each containing around 3,000 households. These are referred to as neighbourhoods in this statistical bulletin. Statistics for neighbourhoods provide a more detailed geographic understanding of housing trends.

HPSSAs provide a different set of statistics to the UK House Price Index (UK HPI). The UK HPI is weighted to reflect the mix of properties sold in the previous year, which is broadly representative of the mix of properties in the overall dwelling stock. The HPSSAs are not mix-adjusted but use rolling years to better reflect the actual mix of property sold than is possible with a shorter period. This means that the UK HPI provides a measure of the changing value of properties in the housing market whereas the HPSSAs measure the price paid for properties sold in a given period. Therefore the 2 sets of statistics provide different figures.

The HPSSAs report the non-adjusted average transactional values down to the small area level, and are therefore particularly useful when identifying the change in price for properties actually sold in a given period and area.

The current neighbourhood (middle layer super output areas) with the lowest median price paid for residential property in England and Wales was priced £24,500. This area covers the village of Horden, near Peterlee, within the County Durham local authority district. Horden is a former mining village, but since the colliery closed (in 1987) has had property sales of predominantly terraced housing for relatively low prices.

Figure 1: Interquartile range of median price paid for all properties across neighbourhoods

Download this chart Figure 1: Interquartile range of median price paid for all properties across neighbourhoods

London accounts for around 12% of all property sales in England, and the median price paid for all properties would be £20,000 lower if sales in London were excluded from the calculation.

When excluding property sales in London, some of the most expensive 10% of neighbourhoods fall within all English regions and in Wales. However, many of the highest priced areas are still clustered around London, showing that even when removing the direct effect of London property sales, the capital still provides a geographical focal point for areas with the highest house prices.

Figure 3: Most expensive 10% of neighbourhoods for median price paid, with and without London 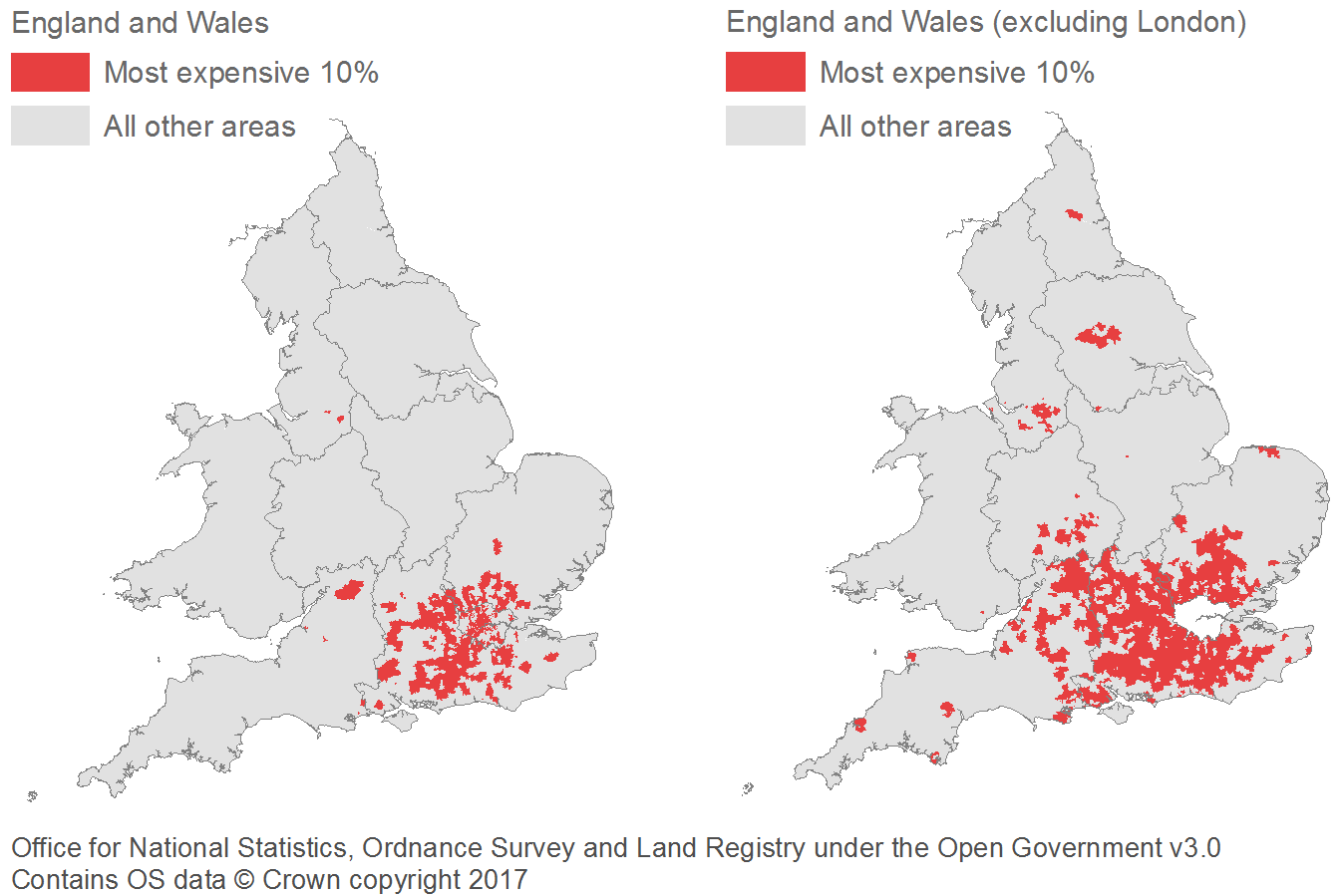 Download this image Figure 3: Most expensive 10% of neighbourhoods for median price paid, with and without London

In the year ending September 2016 the median price paid for flats and maisonettes in England was 23.5% higher than it would be if calculated without the transactions in London.

Figure 4 shows that since 1995, the effect of London property transactions on the median price paid calculated for flats in England has fluctuated between 15.4% and 36.7%, but has remained consistently higher than the London effect of all other property types. In year ending September 2016 the median price paid for flats was £46,935 (23.5%) higher than if it were calculated without property transactions for London.

London accounts for around 1 in every 3 sales of flats in England which helps to explain why the effect of London property sales on the national median price paid is greater for flats than for any other property type. London accounts for 1 in every 50 sales of detached properties and therefore London has a smaller impact on the overall value calculated for the median price paid for detached properties in England overall (1.1%).

Housing affordability in England and Wales

This release adds new data, on an experimental basis, to cover the year ending September 2016 and updated figures for the whole time series.

New geographies have been added following demand from users of our data, as follows:

Details of the policy governing the release of new data are available in the UK Statistics Authority’s Code of Practice for Offical Statistics or from the Media Relations Office: media.relations@ons.gov.uk.