A case study is included to highlight how house price statistics for small areas can be used to understand new housing developments in small areas in England and Wales.

House Price Statistics for Small Areas (HPSSAs) use data from the Land Registry (LR) to provide statistics on the price paid and composition of residential property transactions on properties that were sold at full market value in England and Wales.

Residential property transactions can be added to or edited in the LR Price Paid Data retrospectively. This can cause changes to the number of sales and price statistics reported in the HPSSAs. For this reason, the entire series of data in the HPSSAs (back to year ending December 1995) is revised quarterly and these data supersede all previously published HPSSA data.

The smallest areas for which statistics are presented are middle layer super output areas (MSOAs), of which there are 7,201 in England and Wales. The largest area available is England and Wales overall. Statistics for MSOAs provide a more detailed geographic understanding of housing trends. It can be useful to view them in the context of the larger areas in which they sit, such as local authorities, regions and the country as a whole. More information about these statistics and their uses can be found in the HPSSAs Explained.

HPSSAs provide a different set of statistics to the new UK House Price Index (UK HPI). The UK HPI is a monthly release which reports mix-adjusted average house prices and house price indices for the UK, its constituent countries, the regions of England and local authority districts. The index is calculated using the LR Price Paid Data. The HPSSAs and the UK HPI follow similar trends, but the UK HPI is a mix-adjusted index, which means it is weighted to reflect the actual mix of properties sold in the previous year. Both the UK HPI and these HPSSAs include statistics showing average house prices for England and Wales, English regions and local authority districts, but the figures are not the same because of the different methods used to produce them.

The UK HPI is designed to reflect overall housing market values from the national to local authority level, while the HPSSAs report the non-adjusted average transactional values down to the small area level, and are therefore particularly useful when identifying the change in price for properties actually sold in a given period and area.

Map 1 shows the median price paid for MSOAs in England and Wales in year ending December 2015. Around 1 in 10 MSOAs had a median price paid of £400,000 or more and these are concentrated in London, the South East and East of England with only a few such areas in other regions. Of the 46 areas in the highest category – those with a median more than the £925,000 stamp duty threshold – 43 are in London.

The areas with the lowest median prices paid (below £95,000) are mainly concentrated in MSOAs within northern cities and within parts of South Wales.

Map 1: Median house price for all dwellings by MSOA, England and Wales

Download this image Map 1: Median house price for all dwellings by MSOA, England and Wales

The price paid for residential property in England and Wales has changed markedly over the last two decades. Figure 1 shows the number of areas in each £25,000 median house price range between 1995 and 2015.

During the early 2000s there was a fall in the number of MSOAs in which the median price paid was a little over £250,000. This was most likely caused by property prices reaching the threshold for higher Stamp Duty Land Tax, payable on properties sold for £250,000 or more. This trend continued until the end of 2014, when a new stamp duty scheme was introduced. This new scheme made it more favourable to pay more than £250,000 for a property than in the previous stamp duty scheme.

In the last decade the range of median house prices continued to widen. Figure 1 shows large increases in the number of MSOAs which had a median price paid of more than £250,000, giving the chart a long “tail”. These MSOAs are predominantly in London and the South East of England. These increases in median price paid slowed temporarily during the most recent recession in 2008 and 2009.

Figure 2 shows the 10 areas in which the median price paid for properties was highest in 1995, and compares this with 2015. The same MSOA, Westminster 019, had the highest median in both periods, having increased almost tenfold over the last 20 years. This area includes Hyde Park, Kensington Gardens and much of Knightsbridge. 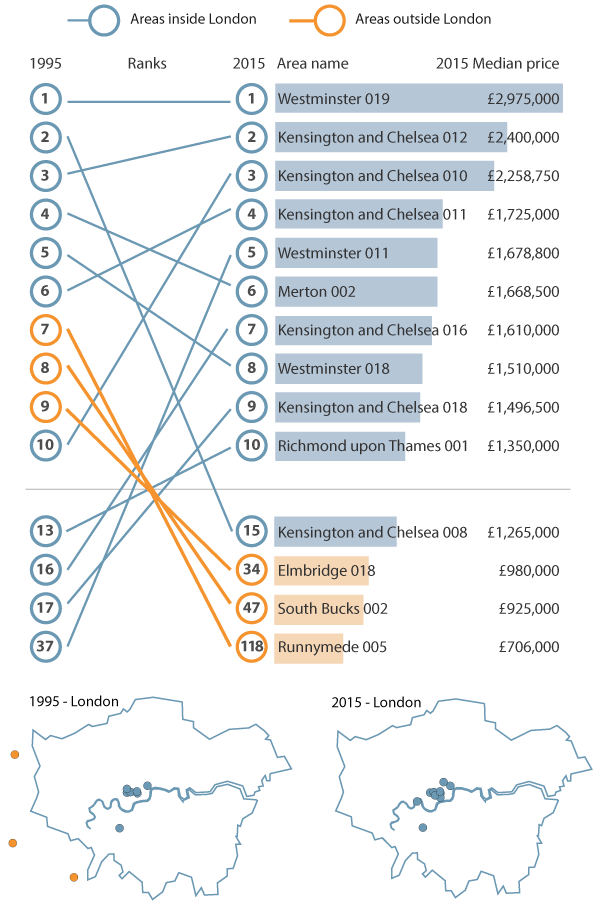 Download this image Figure 2: Changes in the 10 MSOAs with the highest median price paid between 1995 and 2015

The Land Registry (LR) Price Paid Data used to produce the House Price Statistics for Small Areas (HPSSAs) has good coverage of transactions which form part of larger housing developments. These data could therefore be used to identify middle layer super output areas (MSOAs) where large developments have been built.

The HPSSAs provide statistics on the number of newly built properties sold in MSOAs. If there are a high proportion of new build sales, compared to the number of sales of existing dwellings, then this is a sign that a large development has completed or has released a lot of new units. To explore this we have looked at a few areas with known large developments. Figures 3 and 4 show some data for one MSOA (Gosport 005) in Hampshire which had a large residential development in the early 2000s.

This area of Gosport includes areas of existing housing and the large Priddy’s Hard site where land use was changed from its historic military use to a predominantly residential new build area.

Figure 3: Percentage of all sales that were for newly built properties, Gosport 005 and England and Wales

Download this chart Figure 3: Percentage of all sales that were for newly built properties, Gosport 005 and England and Wales

Figure 4: Number of sales of newly built and existing properties in Gosport 005

Download this chart Figure 4: Number of sales of newly built and existing properties in Gosport 005

This release includes around an additional 300,000 records of residential property transactions which were not included in previous House Price Statistics for Small Areas (HPSSA) releases. The records are from 1995 to 2012 and many (over 40%) are for transactions in London. Flats/maisonettes and terrace house types each account for over a third of the additional records. These additions have improved the accuracy of the historic HPSSA series in terms of both the price statistics presented and the number of sales data. The historic data included in this release supersedes all statistics presented in previous HPSSA releases.

The additional records are a one-off, following improved processing at the Land Registry, and so no more large additions of this type are anticipated. In future, only small changes will still be made as a result of errors or omissions notified to the Land Registry by users of the data.

For more information about the quality and methods used to produce these statistics, see our Quality and Methodology Information document.

Details of the policy governing the release of new data are available in the UK Statistics Authority’s Code of Practice or from the Media Relations Office: media.relations@ons.gov.uk