This release contains updated estimates of output, inputs and productivity for public service education in the UK between 1996 and 2012, in addition to new estimates for 2013. Education output is the quantity of education delivered adjusted for the quality of delivery. The quantity is measured as the number of students adjusted for absence and the quality is measured based on student examination performance. Education inputs are composed of labour, goods and services, and consumption of fixed capital. Productivity is estimated by comparing growth in the total amount of output with growth in the total amount of inputs used. 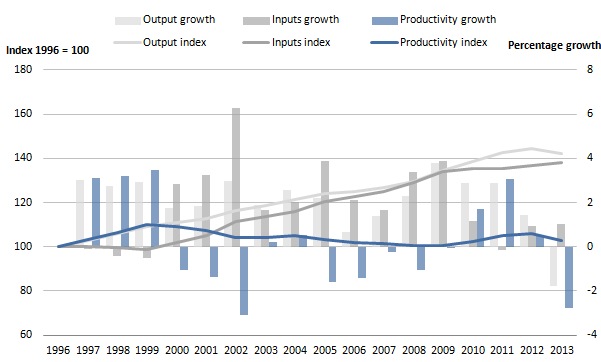 Public service education productivity is estimated by comparing growth in the total amount of education output with growth in the total amount of inputs used. Productivity will increase when more output is being produced for each unit of input compared with the previous year. Estimates of output, inputs and productivity are given as both growth rates which show the change from the previous year, and as indices which show the overall trend over time compared to the base year in 1996.

Estimates are constructed using data from each of the devolved administrations where available, with their individual growth rates weighted together by their relative share of total UK education expenditure. Trends in output, inputs and productivity for England tend to drive the overall UK trend as England has the largest expenditure share; therefore, much of the additional context provided in this article to aid interpretation of the estimates relates to the English education system.

Education output is the quantity of education delivered adjusted for the quality of delivery. The quantity is measured as the number of students adjusted for attendance and the quality is measured based on student examination performance. Education inputs are composed of labour, goods and services, and consumption of fixed capital. Further information on methods is available in our sources and methods paper2.

It is important to note that while these productivity estimates provide a measure of the amount of output which is produced for each unit of input, they do not measure value for money or the wider performance of public education services. They do not indicate, for example, whether the inputs have been purchased at the lowest possible cost, or whether the desired outcomes are achieved through the output provided.

The estimates in this release have an open revisions policy, meaning that each time a new article is published revisions can occur for the whole of the time period. The majority of changes in this article are due to a new quality adjustment measure for England and changes to the treatment of academies which is explained in the previously published methods change paper3.

Public service education output consists of estimates of the quantity of education delivered adjusted for changes in the quality of delivery. The quantity of output is measured as the number of students adjusted for absence for each of the following sectors which are weighted together to produce an overall output quantity series:

Figure 2a shows the quantity output growth by sector before it is weighted by expenditure share. Figure 2b presents this information after weighting, showing how growth in each sector contributes to the growth in overall output quantity. For ease of interpretation, separate contributions are reported for primary schools, secondary schools and further education and the remainder are grouped as other.

Figure 2b: Public service education contributions to quantity output growth by sector, 1997 to 2013

Download this chart Figure 2b: Public service education contributions to quantity output growth by sector, 1997 to 2013

Further education output quantity grew by 0.1% in 2013 compared with the annual average growth from 1996 to 2012 of 0.9%2, though further education growth is more volatile than primary and secondary schools. Further education’s expenditure share is small and has been decreasing over time, from 16% in 1996 to 12.4% in 2012.

Higher growth rates for the "Other" category between 1997 and 2003 are driven by large growth rates for publicly funded pre-school education, which coincides with the introduction by all UK administrations between 1998 and 2002 of a free, part-time early education place for 3 and 4 year olds. The remaining sectors contribute little to the overall trend due to a combination of small growth rates and a low expenditure shares. From 2004 to 2013, the contribution to output quantity growth from other sectors has been between -0.1% and 0.2% in every year. In the latest year, 2013:

In line with the recommendations of the Atkinson Review1 a quality-adjustment is applied to the estimate of education quantity. Quality of education is challenging to measure as it encompasses many aspects of a child’s education; therefore, due to the practicality of what it is possible to consistently measure, exam performance is used as a proxy for quality. The method applied to all primary and secondary schools for England has changed since the previous article. The use of Key-Stage 4 (GCSE) all examination average point scores (APS)2 has been replaced by the use of Level 2 attainment3 at age 16 from 2008 onwards. For the period up to 2008, APS continue to be used. More information on this change and its impact on previously published estimates, can be found in the revisions section of this article as well as the associated methods change paper4. The new quality adjustment for England is applied for Northern Ireland and APS continue to be used for Scotland and Wales. For ITT, the proportion of students who achieve Qualified Teacher Status (QTS) each year is used as a quality adjustment. No quality adjustment is applied to the other sectors.

Figure 3 shows the contribution of quality adjustment to the total output. The quantity output index throughout the series has remained fairly constant with an annual average growth rate of 0.4% between 1996 and 2013 with changes likely to reflect changes in the school age population. Given schooling is compulsory from the age of 5 in the UK, population trends are directly reflected in the pupil census data that are used in the estimates of education quantity. The trend of increasing output over time in the quality adjusted output index is therefore being driven almost entirely by changes in the quality measure. 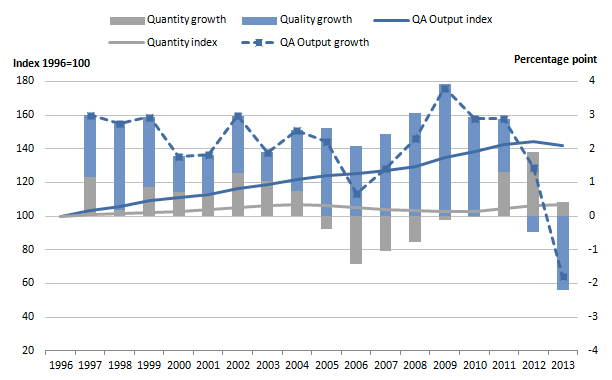 Caution should be used when interpreting the change in the quality adjusted output trend from 2008 onwards. Over this period there have been changes to the examinations which count towards school performance statistics in England, which has influenced both the number and type of examinations sat by some pupils. As a result, some of the change in attainment statistics used for quality adjustment may not be entirely caused by changes in the quality of education provided. In particular, changes to school performance tables announced by the Department for Education – as a result of Professor Alison Wolf’s review of vocational education5 – limited the size and number of non-GCSEs that counted towards performance which impacted on attainment statistics from the academic year 2012 to 20136.

Inputs to publicly-funded education are broken down into 3 components, weighted together using their share of total education expenditure:

Figure 4a shows inputs growth by component before it is weighted by expenditure share. Figure 4b presents this information after weighting, showing how growth in each component contributes to the growth in overall education inputs.

Figure 4b: Public service education contributions to inputs growth by component, 1997 to 2013

Download this chart Figure 4b: Public service education contributions to inputs growth by component, 1997 to 2013

From 1996 to 2013, the annual average growth rate of labour inputs was 1.3%, with highest growth rate of 4.0% in 2001 and the largest fall of 2.9% in 1999. In 2013, labour inputs grew faster than average at 2.6% due to an increase in the number of support staff. This coincides with an extra 5,000 places on teacher training schemes in England which provided paid placements in schools. In 20121 labour expenditure accounted for 61% of total public service education spending and labour was the dominant contributor to total inputs growth prior to 2002. The contribution of labour inputs has been smaller in more recent years, though the positive contribution of 1.6 percentage points in 2013 drives the overall positive growth rate in this year.

After an initial increase in growth rates of fixed capital consumption from the start of the series to the largest growth of 5.2% in 2002, growth rates have decreased over time to 2.8% in 2013. Capital consumption has a small expenditure share of 13% in 2012 and consequently contributes relatively little to the growth rate of total inputs in each year.

Overall, public service education inputs have grown in every year of the series since 2000, with the exception of a marginal fall of 0.2% in 2011 where a fall in the volume of goods and services offsets an increase in the volume of labour. From 2010 onwards, the growth rate of inputs has slowed, with an annual average growth rate over the period 2010 to 2013 of 0.7% compared with the annual average growth rate of inputs over the whole series from 1996 to 2013 of 1.9%. 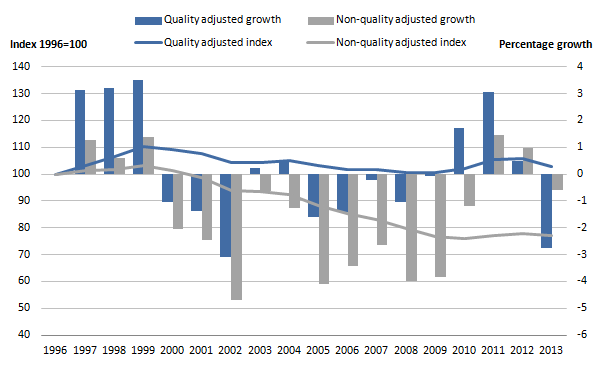 Non-quality adjusted education productivity grew slowly between 1996 and 1999 caused by low output growth of less than 1.2% in each year combined with a slight fall in inputs of 0.5% or less. Non-quality adjusted education productivity then declined between 2000 and 2010 as a result of a switch to strong inputs growth outstripping slow growth or falls in output quantity which only exceeded 1% in 2002 and 2003. In particular, falls in productivity between 2005 and 2010 reflect falls in the number of students in primary, secondary and further education while inputs continued to rise.

Caution should be exercised when interpreting the trend in the quality-adjusted productivity series in recent years due to changes to the examination system and performance tables in England. These changes may impact on the comparability over time of the attainment data used for the quality adjustment, particularly in the period from 2012 to 20131.

Over the whole series from 1996 to 2013, non-quality adjusted productivity fell by an average of 1.5% per year. This becomes an annual average growth of 0.2% when the quality adjustment is applied.

In this release, there have been major revisions from 2008 to 2012 due to changes in the method of quality adjustment for England and the treatment of academies. A detailed account of these changes and their impact on previously published estimates of public service education output, inputs, and productivity can be found in the previously published methods change paper1.

The method for quality adjusting output for England has been changed from using Key-Stage 4 all examination, Average Point Score to using Level 2 attainment statistics from 2008 onwards. Changes in 2013 to the method of calculating Key-Stage 4 Total Average Point Score means there is a structural break in the attainment series and it would not be possible to apply the APS attainment measure on a consistent basis. Evidence also suggests that significant increases in the APS in England between 2008 to 2009 and 2012 to 2013 can, in part, be attributed to increases in the number of non-GCSE examinations taken and are not fully reflective of changes in education quality. The selected Level 2 attainment statistics provide a consistent historical time series which will also be more resistant to future planned changes in the education system. Prior to 2008, APS continue to be used.

The second change was to the treatment of academies, which we are now treated in the same way as all other state-funded schools in the calculations of both output and inputs. This creates a more realistic time series which avoids spurious changes in inputs caused by conversion of maintained schools to academies since 2010.