ONS have released today (11 December 2015) tables of life expectancy (ex), probability of death (qx) and numbers of persons surviving (lx) from the 2014-based National Population Projections (NPP). These tables contain historical and projected figures for 1981 to 2064 on a period and cohort basis from life tables calculated using observed and projected deaths and population estimates and projections.

Period and cohort life tables are produced biennially based on the assumptions for future mortality from the NPP. These tables give historical and projected statistics by single year of age and sex, from 1981 to the NPP base year (2014) and then 50 years into the future from the base year (2015 to 2064). The historical life tables are based on unsmoothed calendar year mortality rates and the projected mortality rates from the NPP. This release relates to the 2014-based NPP published on the 29 October 2015.

Life tables and life expectancy figures provide users with an indicator of the health of the nation which can be used to inform policy, planning and research in both public and private sectors in areas such as health, population, pensions and insurance.

Public Sector users of life tables include the Government Actuary’s Department, Department of Work and Pensions, HM Treasury, Department of Health, Public Health England and Health Trusts. Outside of government, users include academics and students, the news media, financial advisors/consultants, insurance companies and actuarial professions, and members of the general public.

Mortality assumptions for recent projections have been determined by analysis of historical changes in mortality rates over differing periods of time and setting assumptions which produce similar improvements over the same periods in the future. The recent past trends (40 years) show average annual improvements of 1.9% for males and 1.5% for females. There has been an element of ‘catching up’ for males in this period with higher rates of improvement in mortality than for females. This is a result of a change in working and social behaviours. For example, relatively high numbers of men who started smoking earlier in the 20th century have now given up, with smoking prevalence lowest for the oldest age groups. Changes in patterns of male employment in heavy industry may also have had some effect. There continues to be much debate amongst demographers as to whether life expectancy will continue to increase at current rates indefinitely or whether lifestyle factors such as a rise in level of obesity and in antibiotic resistance may cause the rate of mortality improvement to stop or even decline.

2014-based principal projection and high and low life expectancy variant

2014-based Principal projection and high and low life expectancy variants

Table 1 gives the period and cohort life expectancy figures at birth from the principal projection for the UK and each of the constituent countries, in the base year 2014, in 2039 and 2064.

Over the next 25 years (2014 to 2039) period life expectancy for men aged 65 is projected to reach 22.3 years (principal projection) and 24.2 years for women. The corresponding projected cohort life expectancies at age 65 are 24.0 years and 26.1 years respectively.

Age 65 is currently the state pension age (SPA) for men and will be for all women by 2018. We often use age 65 as the age someone might retire from paid employment. However, not everyone will retire at age 65; some retire early, some carry on working beyond pension age and SPA is due to increase. For example, a person born on 1 July 1960 can currently expect to retire in October 20261, when they will be aged 66 years and 3 months. If they retire at age 66 in 2026 they can expect to live a further 20.0 years if they are men and 22.0 years if they are women. This is assuming the mortality rates remain the same as they were in 2026. If future assumed improvements in mortality rates are considered (cohort projections) then they can expect to live an additional 2 years. This would mean a further 21.7 years after retirement if they are men and 23.8 years further if they are women.

Notes for life expectancy at age 65

Table 3: Period life expectancy at birth in selected countries, 2014 and 2060

Download this table Table 3: Period life expectancy at birth in selected countries, 2014 and 2060

The mortality rate (qx) measures the proportion of people reaching a given birthday within a calendar year who die before their next birthday, that is, the probability that a person aged x will die before reaching age (x + 1). Once all the qx mortality rates have been calculated, a life table can be constructed, as the qx rates are required in order to calculate a life expectancy figure.

In each of the three years shown the pattern of initially high mortality at birth can be seen: from the age of one, mortality falls and remains low until around the age of 16. Mortality rates then begin to increase steadily throughout the rest of the life course. Males have higher mortality rates during the life course than females. Note the bulge for males between the ages of 16 and 25 where the probability of dying between birthdays increases sharply before returning to the steady increase by age. The increase in mortality rates at these ages is associated with the ‘high risk’ behaviours of young adults such as road accidents1, alcohol consumption and drug use2. This bulge in male deaths remains in the projections for 2064. In contrast, for females, mortality at this age is lower in 2014 than for males and the bulge appears to have almost disappeared by 2064. 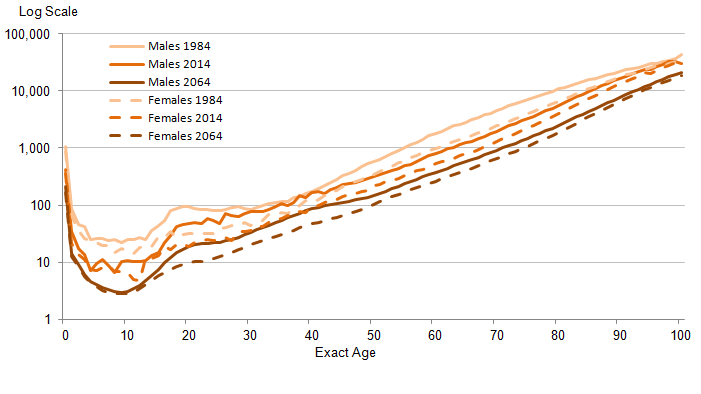 Publishing the qx tables enables users to produce their own life tables or their own projections of mortality, which is particularly useful for pension and insurance analysis.

Notes for probability of dying (qx)

The numbers of survivors by age in the life table are the numbers alive at an exact age from a starting population of 100,000 (at age 0). The starting population at age zero is an arbitrary number called the radix, and since everybody ultimately dies, the lx is a curve which takes the value 100,000 (at age 0) and falls to zero at whatever age represents the maximum attainable human life-span. The data in the tables published alongside this statistical bulletin stop at age 100 and, as Figure 4 shows, the curves do not quite fall to zero by age 100, particularly in 2064.

Figure 4 presents the lx values from the male and female period life tables for selected years. The graph shows two main features. Firstly, there is the survival to older ages. This is shown by the increasing age over time at where the slope begins its rapid decline. For example, the age at which the number of survivors falls below 90,000 is increasing; in 1984 for males it was age 55, in 2014 it is projected to be age 62, and in 2064 it is projected to be age 71. Secondly, the gap between numbers of males and females surviving to older ages is narrowing. This is particularly noticeable at age 70; in 1984 the gap between numbers of men and women surviving to age 70 was just over 14,000 per 100,000 born; by 2064 this is projected to reduce to around 3,000.

The lx is often used to calculate the probability of surviving from one age to an older age.

The National Population Projections are produced primarily to provide an estimate of the future population of the UK and its constituent countries as a common framework for use in national planning. Usually, a new set of projections is made every 2 years based on assumptions which are judged to be the most appropriate from the statistical evidence available at the time. The projections are made for successive years running from one mid-year to the next using the cohort component method. For each age, the starting population plus net inward migrants, less the number of deaths, produces the number in the population, aged one year older, at the end of the year. To this has to be added survivors of those born during the year.

Mortality projections are based largely on extrapolation of past trends in rates of mortality improvement. Expert opinion is used to inform the assumptions made about future mortality rates.

More information on the assumption setting process for future mortality patterns are outlined in: 4. Mortality assumptions: 2014-based national population projections.

A life table is purely a hypothetical calculation. It is a statistical tool typically used to portray expectation of life at various ages. The basic assumption is that a given cohort of births (100,000 born in a given year) are subject, as the survivors pass through each year of age, to the mortality rates prevailing for each age.

Life tables are usually constructed separately for males and females because of their very different mortality patterns. A life table describes the course of mortality throughout the life cycle. A life table contains:

mx The central rate of mortality, defined as the average annual number of deaths at age x last birthday in the year or years to which the life table relates divided by the average population at that age over the same period.

qx The mortality rate between age x and (x + 1), that is the probability that a person aged x exactly will die before reaching age (x + 1).

lx The number of survivors to exact age x of 100,000 live births of the same sex who are assumed to be subject throughout their lives to the mortality rates experienced in the year or years to which the life table relates.

ex The average period expectation of life at exactly age x, that is the average number of years that those aged x exactly will live thereafter based on the mortality rates experienced in the year or years to which the life table relates.

The method of constructing a life table is widely available in demographic text books, for example, Hinde A, Demographic Methods1.