Additional economic analysis of the latest UK labour market headline statistics and long-term trends for May 2019.

The UK’s departure from the EU was extended to the end of October 2019, but it might happen earlier than that if there is an agreement before that date. The extension was granted to enable the UK government to agree on an exit deal from the EU. The Bank of England reported that shifting expectations about EU exit are leading to volatility in the economy and, on 2 May 2019, the Bank’s Monetary Policy Committee voted unanimously to keep the bank rate unchanged. It also reported that the uncertainty associated with EU exit is adversely impacting on business investment.

The latest Labour Force Survey (LFS) estimates show that in the first calendar quarter (January to March) of 2019, the seasonally-adjusted number of people in employment in the UK increased by 99,000 on the quarter to 32.7 million. Over the same period, the employment rate increased by 0.2 percentage points to 76.1%.

The employment rate for women increased by 0.4 percentage points to a joint record high of 71.8% in the first calendar quarter of 2019. That for men was largely unchanged, at 80.3%.

Figure 1: The percentage of self-employment in total employment had an upward trend since 2000

Percentage of self-employment in total employment, UK, seasonally adjusted, March to May 1992 to January to March 2019

Download this chart Figure 1: The percentage of self-employment in total employment had an upward trend since 2000

The UK labour market is quite diverse and employs people of different nationalities. The Office for National Statistics publishes data on employment by nationality. The data must not be used as a source of migration data.

Workers with Bangladeshi and Pakistani nationalities had the lowest employment rate (50.9%). A 2018 report by the Department for Work and Pensions (DWP) on ethnicity facts and figures shows the same outcome for Bangladeshi and Pakistani nationalities relative to other ethnic minorities. An earlier study by the DWP (in 2006) on employment barriers faced by Pakistanis and Bangladeshis in Britain examined the reasons for the skewed labour market outcomes.

Figure 2: The nationals of Bangladesh and Pakistan had the lowest employment rates

Download this chart Figure 2: The nationals of Bangladesh and Pakistan had the lowest employment rates

There are several possible reasons for the differences in employment rates of different nationalities. For instance, people from countries where the English language is the main language of communication tend to have higher employment rates. Education, skills and cultural integration may also influence the employment rates of different nationalities. Cultural integration can increase networks that are important for securing employment. In some cases, discrimination and prejudice may result in lower employment rates, especially among ethnic minorities. A research report by the DWP on discrimination in recruitment practice (PDF, 324KB) analysed the different types of ethnic minority penalties in the UK labour market.

Unemployment in the UK has been declining steadily since 2011. In the three months to March 2019, the number of people who were unemployed decreased by 65,000 to 1.3 million. This was the largest quarterly decrease since September to November 2016.

Economic inactivity is one of the three labour market statuses. People who are economically inactive are outside the labour force (that is, they are neither employed nor unemployed). The latest Labour Force Survey data show that in the three months to March 2019, the number of people in the UK who were economically inactive decreased by 23,000 to 8.61 million. Over the same period, the inactivity rate fell by 0.1 percentage points to 20.8%.

The people who were economically inactive can be categorised by reason for inactivity. There are seven categories: students, the long-term sick, the temporarily sick, discouraged workers, those looking after family or home, the retired, and those who were inactive for “other” reasons. In the three months to March 2019, the numbers of students, the long-term sick and the temporarily sick decreased. Over the same period, the numbers of those who retired, those looking after family or home, the discouraged, and those that were inactive for “other” reasons all increased.

The structure of economic inactivity in the three months to March 2019 is illustrated in Figure 3. 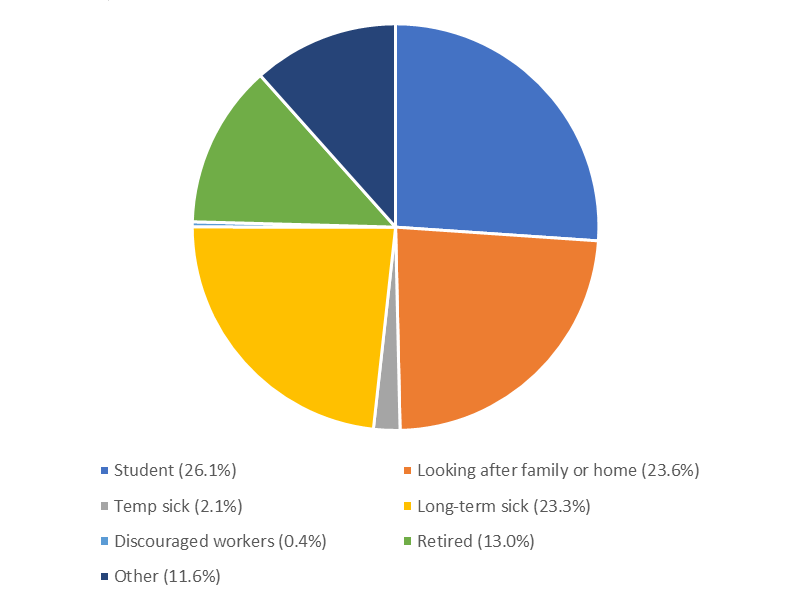 Figure 3 shows that students constituted the largest group of economically inactive people, followed by those looking after home or family and those on long-term sickness. The smallest two groups were discouraged workers and the temporarily sick.

The UK economy has been characterised by a growing trend of vacancies and a declining trend of redundancies.

The Labour Force Survey data show that in the first calendar quarter (January to March) of 2019, there were 850,000 vacancies in the economy. Most of the vacancies were in the services sector (752,000).

The sectors that had vacancies greater than 60,000 were:

The lowest numbers of vacancies were in water supply, sewerage, waste and remediation activities (4,000), electricity, gas, steam and air conditioning supply (3,000) and mining and quarrying (1,000).

Figure 4 plots the trends of unemployment and vacancies. The growing number of vacancies, together with falling unemployment, may be an indication that firms are increasingly facing challenges in recruiting suitable workers.

Figure 4: The gap between unemployment and vacancies has been narrowing

Download this chart Figure 4: The gap between unemployment and vacancies has been narrowing

Even if vacancies and unemployment numbers equal each other, there will always be a certain level of friction and mismatch in the labour market. For example, the gap between the demand and supply of labour (that is, there will always be a certain number of unemployed people) is a result of labour market friction associated with job changes. People in long-term unemployment lose part of their human capital and networks, and some unemployed people lack the skills required in existing jobs.

Despite the growing number of vacancies, some employers are making their workers redundant. For instance, latest data show that 1,000 workers were made redundant to bring the total number of redundancies to 92,000 in the three months to March 2019.

There are many reasons why firms make workers redundant. For example, the closure of retail outlets on the high street, uncertainly of the business operating environment and the winding-up of business operations all contribute to redundancies.

Comparative analysis of sectoral regular average weekly pay shows that the wholesale, retailing, hotels and restaurants sector was paying below the economy’s average (that is, £334 compared with £498). Low pay in the sector has adverse impact on the living standards of the workers in that sector.

Four sectors paid above the economy’s regular average weekly pay. These were:

The people in employment can be categorised as employees (if they receive wages or salaries from employers) or as self-employed (if they work for themselves). This categorisation excludes unpaid family workers and people on government-supported training and employment programmes. In this section, we focus on self-employed workers.

The analysis pointed out that the growth in self-employment is partly explained by changes in technology. For instance, the rise of the “gig economy” in recent times has been driven by new technology platforms that make it easier for people to become self-employed. The technology has decoupled jobs from location and people can now work from anywhere, any time.

The structure of self-employment is broad. It includes the conventional situation of people who work for themselves or independent contractors (for example, builders and plumbers) and people who work through online platforms (classified as the “gig” economy). The last group of workers constitutes the supply of labour to what is known as task-based demand for labour.

If we analyse each sex category separately, we observe that more men worked on a full-time basis (83%) than on a part-time basis (17%). For women, part-time working (53%) dominated full-time working (47%). These statistics show that women who were self-employed tended to work on a part-time basis, while men tended to work on a full-time basis. This may not be surprising as women are more involved in providing childcare, which requires flexibility, than men. In general, fewer men than women engage in caring activities in the home.

Figure 5: Self-employment was concentrated in the tertiary industry category’

Download this chart Figure 5: Self-employment was concentrated in the tertiary industry category’

Figure 6: Construction sector self-employment was the highest in the secondary industry

The self-employment structure of the secondary industry, UK, seasonally adjusted, January to March 2019 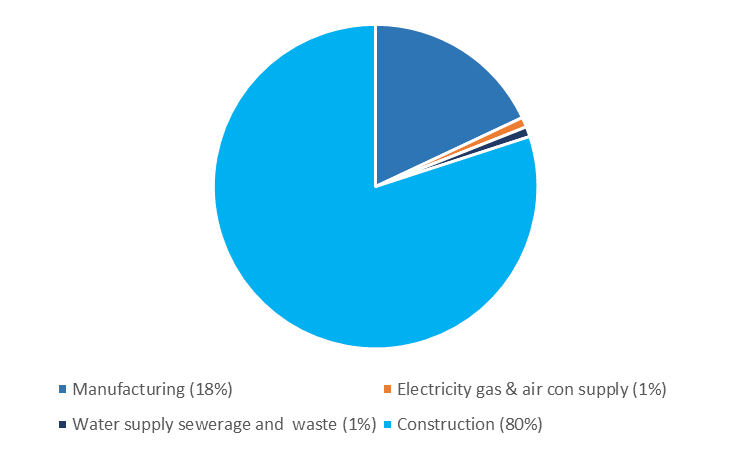 Download this image Figure 6: Construction sector self-employment was the highest in the secondary industry

Looking at the economy as whole, we observe that self-employment in the construction sector dominated that in all other sectors. In the three months to March 2019, construction was the largest employer of self-employed workers (20.3%), followed by the professional, scientific and technical activities sector (12.8%), distribution (7.9%), administration and support services (7.3%) and transport and storage and health and social work (6.5% apiece).

The report identified construction activities as consisting of contracting and service activities. The contracting activities include the construction of buildings, civil engineering and specialised activities like plumbing and electrical installations. The service activities include architectural and quantity surveying, wholesale of wood, construction materials, plumbing and heating equipment. The skills requirements, which vary from elementary to advanced, determine the structure and level of self-employment in the sector. Based on the published data, it is not possible to tell which of the different activities drive(s) the growth of self-employment in the sector.

Although the construction sector had the most self-employed workers, the growth of self-employment was higher in other sectors. Figure 7 plots indices of employment in the six largest sectors by self-employment since 2006.

Figure 7: Self-employment grew fastest in the administration and support, and the professional, scientific and technical services sectors

Self-employment indices in the top six sectors by self-employment, UK, seasonally adjusted, June to August 2006 to January to March 2019

Download this chart Figure 7: Self-employment grew fastest in the administration and support, and the professional, scientific and technical services sectors

Disaggregating industrial self-employment numbers by sex shows that there were more men than women in all sectors except in health and social work, education, household employment, and other service activities sectors.

The average ratio of the number of men to women in self-employment is two men for every woman. There are six sectors in which the ratio is greater than the average. These are manufacturing (3), finance and insurance (3), agriculture, forestry and fishing (4), information and communication (4), transport and storage (11) and construction (25). The higher the ratio, the more male-dominated the sector is.

There are several possible explanations for the dominance of men in the transport and storage, and construction sectors. Historically, the two sectors have been male-dominated and this alone may discourage some women from joining. Women may experience prejudice when they join the sectors. For instance, in the construction sector, some of the reasons why women may be fewer include bullying and harassment (especially in manual trades)1, improperly adapted safety equipment (PDF, 547KB) and the general cultural belief that women may not be able to perform physical work as well as men.

In the transport sector, there is less representation of women in technical jobs (for example, drivers and pilots), which may be because of barriers from both the employer and employee perspectives.

The European Commission (2018)’s report on the ‘business case to increase female employment in transport (PDF, 3.87MB)’ tabulated the types of barriers faced by women, from an employee perspective. These include:

Notes for: Self-employment in the UK