The estimates in this section relate to the number of people in employment and should not be used as proxies for migration flows into the UK. When compared with the same period a year ago, employed non-UK nationals decreased by 11,000 in the three months to June 2018. Breaking this down further shows that EU nationals (EU27) experienced a fall in employment of 86,000, while non-EU nationals experienced an increase of 74,000. 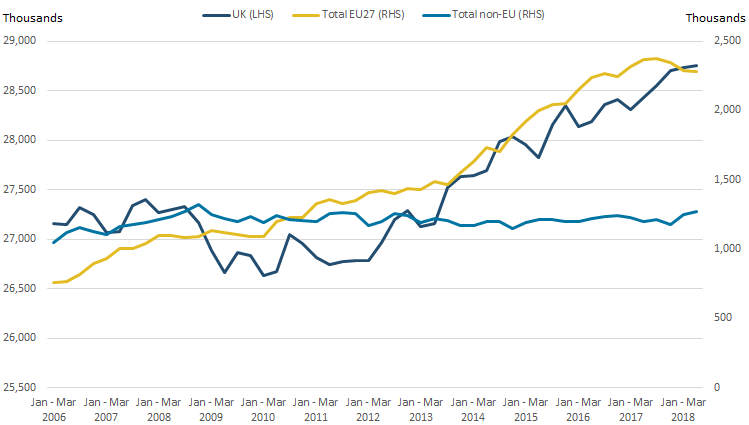 Of all the workers that fell in these three categories in the second quarter (Apr to June) of 2018, approximately 80% wanted more hours in their current jobs, 12% wanted replacement jobs with longer hours and 9% wanted additional jobs.

In the LFS, people who responded positively to wanting more hours and/or a new job are classified as underemployed if they work below 48 hours a week (or below 40 hours a week for people aged under 18 years). By this measurement, the number of underemployed people in the three months to June 2018 stood at 2.39 million, down 121,000 when compared with the previous quarter.

Figure 2 shows that the number of underemployed workers has been declining since 2013, and that the number of overemployed workers has been increasing since 2012, but has followed a downward trend in the most recent quarter (Apr to June). Although the level of underemployment has not yet reached its pre-downturn levels, the overemployment level has surpassed its pre-downturn level. Underemployment is partly contributing to the historically low unemployment rate in the economy.

Analysis of unemployment duration (Figure 3) shows that all three measures (that is, short-term, medium-term and long-term unemployment) declined in the second quarter of 2018.

The number of unemployed people can be broken down by nationality. The breakdown shows that 80.0% of the unemployed are UK nationals, 5.9% are EU27 nationals, and 14.1% are non-EU nationals. UK nationals experienced the largest decrease in unemployment of 51,000 in the second quarter of 2018.

The number of inactive people increased by 77,000 to 8.74 million in the second quarter. The inactivity rate increased after two consecutive quarters of declining. Analysis by age group shows that inactivity among 16- to 17-year-olds decreased, but it increased among all other age groups. The largest increase in inactivity occurred in the 18 to 24 years age group, which increased by 39,000 on the quarter.

In the July labour market economic commentary we observed that the number of people in inactivity sub-categories of students, people looking after family, the temporarily sick, the discouraged and the retired decreased. In the three months to June 2018, there were decreases in inactivity among the same sub-categories, except for the long-term sick sub-category that recorded an increase of 61,000 when compared with the previous quarter.

The quarterly changes featured in the headline Labour Force Survey (LFS) aggregates are driven by the behaviour of flows between labour market statuses. Figure 4 summarises the (non-seasonally adjusted) quarterly flows between the periods January to March 2018 and April to June 2018. It reports the total number of people who changed labour market status: approximately 2.56 million people moved across the labour market. Compared with a year ago, this is a fall of 125,000 people. 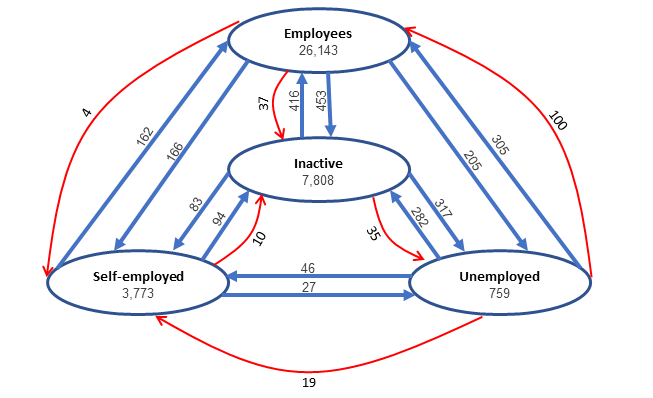 Figure 4 shows that more people left the employee status (824,000) than any other stock. This was closely followed by inactivity, which saw 817,000 movers. Unemployment saw gross outflows of 633,000, while the self-employed status saw gross outflows of 283,000. Inactivity saw the greatest change relative to a year ago, with 79,000 fewer people moving from the stock.

Although labour market flows capture moves over the quarter, it is possible for an individual to experience multiple transitions between and within statuses in one quarter and end the quarter in the same status. Such transitions are not captured by the current flows data, and this results in under-estimation of the level of churning in the labour market.

We can calculate the persistence of a given labour market status to illustrate the likelihood of an individual remaining in one status from one quarter to another. The persistence rate is calculated by expressing the gross flow of a status in the second quarter as a percentage of the total stock of that status in the first quarter.

The July labour market economic commentary focused on the structure of employment. It highlighted that there has been a surge in self-employment over recent years.

The data suggest a positive trend for self-employment over time. As stated previously, those unemployed drove the transfers to self-employment in the most recent quarter. In previous quarters, most inflows into self-employment came from people who were employees. However, these figures fell by 26,000 on the year to 166,000 in the second quarter of 2018.

The movements between job skills have interesting trends, as shown in Figure 6. The figure shows that there has been an outflow from low-skilled jobs since the first quarter (Jan to Mar) of 2017. Over the same period, there have been increases in flows into high-skilled and medium-skilled jobs.

Download this chart Figure 6: Net flows into jobs by skill