A guide to help users understand estimates from the Annual Survey of Hours and Earnings (ASHE) and aid interpretation by addressing common questions about the data.

Annual Survey of Hours and Earnings (ASHE) information relates to gross pay before tax, National Insurance or other deductions, and excludes payments in kind. With the exception of annual earnings, the results are restricted to earnings relating to the survey pay period and so exclude payments of arrears from another period made during the survey period; any payments due as a result of a pay settlement but not yet paid at the time of the survey will also be excluded.

For particular groups of employees, changes in median earnings between successive surveys may be affected by changes in the timing of pay settlements, in some cases reflecting more than one settlement and, in others, no settlement at all.

Most of the published ASHE analyses (that is, excluding annual earnings) relate to employees on adult rates whose earnings for the survey pay period were not affected by absence. They do not include the earnings of those who did not work a full week, and whose earnings were reduced for other reasons, such as sickness. Also, they do not include the earnings of employees not on adult rates of pay, most of whom will be young people.

Annual Survey of Hours and Earnings (ASHE) is based on a 1% sample of employee jobs taken from HM Revenue and Customs Pay As You Earn (PAYE) records. Consequently, individuals with more than one job may appear in the sample more than once. Information on earnings and paid hours worked is obtained from employers and treated confidentially. ASHE does not cover the self-employed or employees not paid during the reference period.

Annual Survey of Hours and Earnings (ASHE) replaced the New Earnings Survey (NES) as our main source of information on the distribution of earnings in 2004. Articles describing the ASHE methodology and the impact of its introduction on 1997 to 2003 data can be found on the ONS website. The main differences between ASHE and NES are:

While ASHE was first run in 2004, NES data have been used to create estimates for 1997 to 2003 comparable to those estimated on ASHE. Thus ASHE estimates are available from 1997 (except annual earnings, which are available back to 1999 only).

We use the median because the distribution of earnings is skewed, with more people earning lower salaries than higher salaries. When using the mean to calculate the average of a skewed distribution, it is highly influenced by those values at the upper end of the distribution and thus may not be truly representative of the average earnings of a typical person. By taking the middle value of the data after sorting in ascending order, the median avoids this issue and is consequently considered a better indicator of “typical” average earnings.

In the Annual Survey of Hours and Earnings (ASHE) bulletin we use the growth in the median (that is, how much the median grows year-on-year), as opposed to the median growth (that is, the median of the growths in each individual’s earnings between years). This is because of the sampling variability and the changes to survey response each year.

The difference between these two measures is illustrated by the theoretical example of five employee jobs shown in Table 1.

Download this table Table 1: A theoretical example of five employee jobs in 2016 and 2017

An article titled Understanding average earnings for the continuously employed, published in 2016 on our website, gives further guidance on how to interpret these statistics. 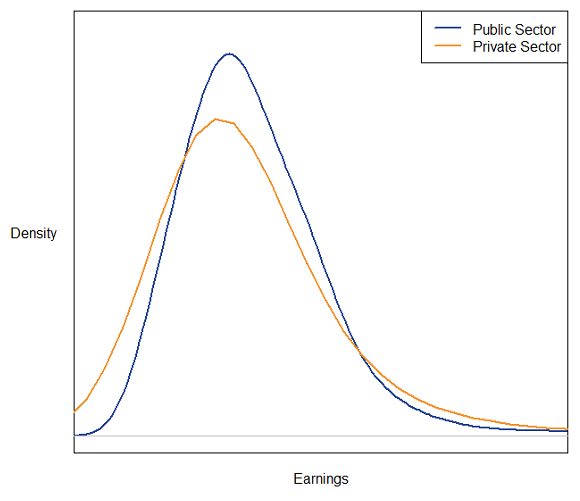 While there is no single measure that fully deals with the complex issue of the differences between men’s and women’s pay, in the Annual Survey of Hours and Earnings (ASHE) bulletins we use median hourly earnings (excluding overtime). Including overtime can skew the results because men work relatively more overtime than women, and using hourly earnings better accounts for the fact that men work, on average, more hours per week than women. The median is less affected by a relatively small number of very high earners than the mean, and therefore gives a better indication of typical pay. A paper further explaining our position on this topic is available.

It should be noted that the ASHE gender pay gap figures do not show differences in rates of pay for comparable jobs, as they are affected by factors such as the proportion of men and women in different occupations. For example, a higher proportion of women work in occupations such as administration and caring, which tend to offer lower salaries.

Consider the following fictitious example (shown in Table 2) representing the male and female samples collected on the Annual Survey of Hours and Earnings (ASHE).

When all employees are considered, the typically lower-paid part-time workers are included, of which there are more lower-paid female workers than male. As a consequence, this causes the gap to increase (usually as a result of the female median decreasing).

Table 2: A fictitious example of the ASHE sample representing the hourly earnings (excluding overtime) for men and women by work pattern

Download this table Table 2: A fictitious example of the ASHE sample representing the hourly earnings (excluding overtime) for men and women by work pattern

The Annual Survey of Hours and Earnings (ASHE) collects detailed information about the earnings of employee jobs; this includes the various components comprising an employee’s earnings before tax and National Insurance deductions. The definitions of these components are as follows:

The Average Weekly Earnings (AWE) statistic, based on the Monthly Wages and Salaries Survey of about 9,000 employers, is the lead measure of short-term changes in average earnings in Great Britain. Figures are available with industrial breakdowns and public and private sector splits. No information is available on occupation, hours worked, and other characteristics of the workforce. An article comparing AWE with the Annual Survey of Hours and Earnings (ASHE) was published on the ONS website in September 2017.

The Labour Force Survey (LFS) collects information on the earnings and normal and actual hours worked of about 15,000 people aged 16 and over each quarter. In addition it collects data on a wide range of personal characteristics, including education level and ethnic origin. This enables the preparation of statistics on levels and distribution of earnings similar to the ASHE but with lower precision due to the much smaller sample size. The LFS collects information from employees, relying on respondent memory of pay amounts. This is different from both ASHE and AWE, which collect their pay information from companies.