Earnings and employment from Pay As You Earn Real Time Information, UK: July 2014 to October 2019

Experimental monthly estimates of paid employees and their pay from HM Revenue and Customs’ (HMRC) Pay As You Earn (PAYE) Real Time Information (RTI) data. This is a joint release between HMRC and the Office for National Statistics (ONS).

View all data used in this Statistical bulletin
Back to table of contents
!

These experimental estimates differ from those produced from the ONS’s Labour Force Survey and Average Weekly Earnings, further details on why can be found in the accompanying article.

In October 2019, 29.0 million people were paid employees (Figure 1). This represents a 1.2% rise in paid employees when compared with the same period last year.

Figure 1: The number of employees has been growing over the past five years

Download this chart Figure 1: The number of employees has been growing over the past five years

Annual growth in the number of employees has remained broadly within a range of 1.0% to 1.5% over the past three years, following higher rates of growth prior to mid-2016 (Figure 2).

Figure 2: Growth in the number of paid employees has been fairly steady over the past three years

Download this chart Figure 2: Growth in the number of paid employees has been fairly steady over the past three years

Figure 3: Median pay has grown over the past five years

Download this chart Figure 3: Median pay has grown over the past five years

Growth in median pay has generally increased over the past four years, although there have been periods of deviation from this trend (Figure 4). Following a relatively stable period at around 2.3% between mid-2016 and mid-2017, pay growth generally increased but less steadily. While pay growth has fallen from its peak of 4.6% in April 2019, it is not yet clear whether this marks a break from its previous upwards, but volatile, trend.

Figure 4: The rate of growth in median pay has generally increased over the past five years

Download this chart Figure 4: The rate of growth in median pay has generally increased over the past five years

The regional figures in this bulletin are based on where employees live and not the location of their place of work. They are also based on three-month moving averages. Median pay across regions and nations of the UK in the three months to October ranged from £1,685 in Northern Ireland to £2,212 in London. 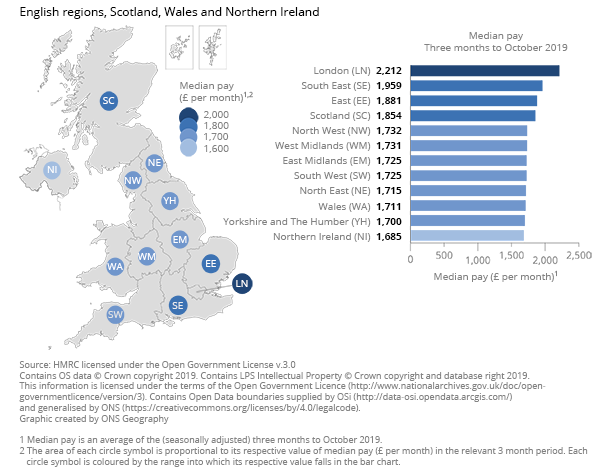 Download this image Figure 5: Median pay varies across the UK

Figure 6: Median pay increased most in Scotland and least in the North East 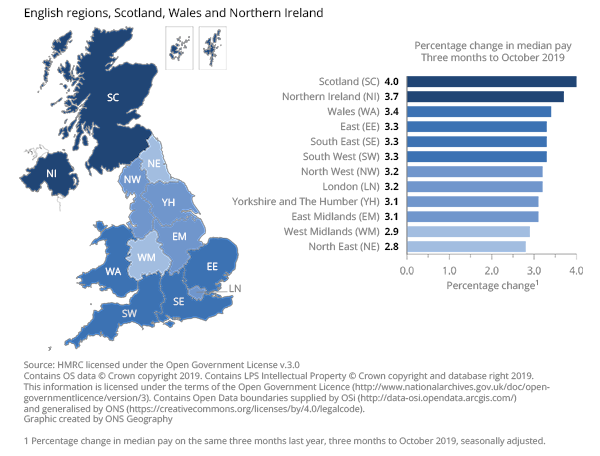 Download this image Figure 6: Median pay increased most in Scotland and least in the North East

When interpreting changes in the distribution over time, it can be useful to compare the level of percentiles relative to the median (that is the amount of earnings in the middle of the distribution, so that half of employees earn more and half earn less).

Figure 8: Since 2014, employees’ pay has generally grown fastest at the low end of the pay distribution

Download this chart Figure 8: Since 2014, employees’ pay has generally grown fastest at the low end of the pay distribution

While the 10th percentile of employees’ pay has generally grown faster than median pay over the past five years – coinciding with the introduction of and increases to the National Living Wage – since mid-2018, the two have grown at broadly the same pace, so their ratio has remained broadly constant. In line with the rest of this bulletin, the chart includes only employees’ pay and not other income such as from self-employment.

Median monthly pay shows what a person in the middle of all employees would earn each month. The median pay is generally considered to be a more accurate reflection of the “average wage” because it discounts the extremes at either end of the scale.

The National Minimum Wage (NMW) is a minimum amount per hour that most workers in the UK are entitled to be paid. There are different rates of minimum wage depending on a worker's age and whether they are an apprentice. The NMW applies to employees aged between 16 and 24 years. The government’s National Living Wage (NLW) was introduced on 1 April 2016 and applies to employees aged 25 years and over.

On the Annual Survey of Hours and Earnings (ASHE) reference date in April 2018, the NMW and NLW rates were:

PAYE refers to Pay As You Earn. This is the system employers and pension providers use to take Income Tax and National Insurance contributions before they pay wages or pensions to employees and pensioners. This publication relates to employees only and not pensioners. It was introduced in 1944 and is now the way most employees pay income tax in the UK.

The data for this release come from HM Revenue and Customs’ Pay As You Earn Real Time Information system. It covers the whole population rather than a sample of people or companies, and will allow for more detailed estimates of the population. The release is classed as experimental as the methodologies used to produce the statistics are still in their development phase. As a result the series are subject to revisions.

This publication covers employees paid by employers only. It does not cover self-employment income or income from other sources such as pensions, property rental and investments. Where individuals have multiple sources of income, only income from employers is included.

The figures in this release are for the period July 2014 to October 2019 and are seasonally adjusted.

Future bulletins are planned to include additional statistics, such as more detailed geographical breakdowns. The focus and timing of these will be informed by user feedback. Please get in touch with us at rtistatistics.enquiries@hmrc.gov.uk if you would like to offer feedback on how the contents can be improved in the future.

An accompanying article contains more information on the calendarisation and imputation methodologies used in this bulletin, alongside comparisons with other earnings and employment statistics and possible quality improvements in the future.

HM Revenue and Customs (HMRC) grants pre-release access to official statistics publications. As this is a joint release, and in accordance with the HMRC policy, pre-release access has been granted to a number of people to enable the preparation of a ministerial briefing. Further details, including a list of those granted access, can be found on HMRC’s website.

This is a joint experimental release between HM Revenue and Customs (HMRC) and the Office for National Statistics (ONS). The existing monthly publications produced by the ONS remain the primary National Statistics for the labour market. The intention is that these new statistics will also be updated on a monthly basis.

Rather than waiting until the development work has been completed, the statistics are being published now to involve potential users in developing the statistics. We hope that this encourages users to provide us with their thoughts and suggestions of how useful the statistics are and what can be done to improve them. Comments can be sent by email to rtistatistics.enquiries@hmrc.gov.uk.

More information about Experimental Statistics, including when they should be used and the differences between them and National Statistics is available.

Strengths of the data

As Pay As You Earn (PAYE) Real Time Information (RTI) data cover the whole population, rather than a sample of people or companies, we will be able to use this to produce estimates for geographical areas, and other more detailed breakdowns of the population. At the moment, the methods for producing such breakdowns are under development and we expect to include further statistics in a future release. These statistics can help inform decision-making across the country. They also have the potential to provide more timely estimates than existing measures.

These statistics also have the potential to replace some of those based on surveys, which could reduce the burden on businesses needing to fill in statistical surveys.

The previous measures of pay and numbers of employees in HMRC’s statistics were based directly on the date that employers paid their employees.

This meant that if an individual started work in the middle of month t, but was paid in month t plus1, the individual was classed as having income as an employee in month tplus1. For that reason, these measures differ from the European System of Accounts (ESA 2010) which requires that wages and salaries are recorded in the period during which work is done, rather than the time that earnings are paid to employees.

The measure used in this publication brings the HMRC measure more in line with these international standards by estimating, for every payment, the period of work to which it corresponds. As in the given example, the individual would be classed as having income as an employee in both month t and month t plus 1. This transformation is called “calendarisation”. More information on the process can be found in the accompanying article.

The other disadvantage of the previous measures was that for individuals paid weekly or every four weeks, there would be months in the year where they appear to have substantial increases or decreases in their monthly income, even though their pay rates and hours worked were unchanged. For example, an individual paid weekly every Friday will be paid four times in months with four Fridays and five times in months with five Fridays. This variability meant it was difficult to assess underlying changes in pay using the previous HMRC statistics.

To reduce the impact of weekly and four-weekly payment cycles on the statistics, they were previously compiled on a quarterly rather than monthly basis. The new measures of pay and numbers of employees in this release largely remove the variability over time caused by these payment frequencies, and as a result it is now possible to produce monthly series.

A disadvantage of the calendarisation used is that the figures for pay and numbers of employees in month t depend on payments made in month t plus 1. This means only around 80% of the data used in the calculation on month t statistics are available at the end of month.

Rather than wait until all those remaining payment returns have been received, we have decided to produce more timely measures of pay and numbers of employees by imputing the values for missing returns. The data on which the statistics are based were extracted at the end of November 2019, which means around 1 to 2% of the pay in the latest month of these statistics is imputed. As a result, the figures in future releases will be updated as new payment returns are received, and the imputation payments can be replaced with actual data.

Further information about the methodology used and comparisons with the ONS’s Labour Force Survey and Average Weekly Earnings statistics can be found in an accompanying article.