The Office for National Statistics introduced its new economic "theme days" in January, which will ensure that related economic statistics are released together.

This article provides a summary of the data released on each theme day alongside a particular focus on the latest gross domestic product (GDP) estimate.

Today’s gross domestic product (GDP) release contains new information regarding UK economic growth in Quarter 1 (Jan to Mar) 2017. In addition, data on services output in February have been published, as well as an early indication of output growth in production, construction and services in March.

Services output grew by 0.3% in Quarter 1 2017, a slower rate than the average of 0.7% seen over the preceding 16 quarters. The latest data for services in March – which is based on early responses to the Monthly Business Survey – suggest output was flat in March following a 0.1% contraction in January and 0.2% growth in February. Of the growth over the whole quarter, the majority of the growth in services was driven by business services and finance (contributing 0.3 percentage points to total services growth).

The headline GDP figure also reflects growth of 0.3% in production and 0.2% in construction (these two components account for around 21% of total gross value added (GVA) combined). Within production, manufacturing rose by 0.5% while output in the energy supply sector (electricity, gas, steam and air conditioning) fell, partially in response to relatively warm weather in February and March.

Part of the slowdown in services growth this quarter is due to a decline in the output of ‘consumer-focused’ industries, such as retail trade. This is consistent with retail sales data released earlier this month, which showed a 1.4% fall in total retail sales volumes for Quarter 1 2017.

With the exception of food and beverage (standard industrial classification (SIC) 56), which saw a 2.7% rise between Quarter 4 2016 and Quarter 1 2017, output in the remaining consumer-focused service industries contained in Figure 2 fell in Quarter 1 2017. However, in some cases, this did coincide with a relatively high level of growth in previous quarters (for example, SIC 59: motion pictures). 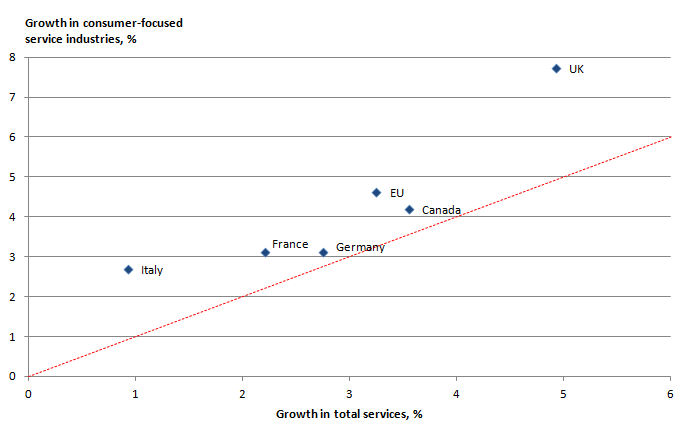 Manufacturing output grew by 0.5% in Quarter 1 2017, down from growth of 1.2% in Quarter 4 2016. The growth in production output was driven primarily by manufacturing, and previous analysis has shown that this can be partially attributed to the manufacture of motor vehicles (particularly those produced for export). The manufacture of textiles and leather products also grew, up 6.5% compared with the previous quarter, contributing 0.1 percentage points to total production growth; however, output in this industry is relatively volatile.

The preliminary estimate of construction suggests that total output volumes rose by 0.2% in Quarter 1 2017 compared with the previous quarter. For the preliminary estimate, figures for March are largely forecasted so a breakdown of the components of construction is not available (official figures for March will be published on 11 May 2017). The previously published monthly path for construction in Quarter 1 2017 shows flat growth in January, followed by a decline of 1.7% in February. More detailed analysis of the construction industry can be found in the short-term indicators economic commentary.

Following a monthly fall of 0.1% in January 2017, February saw a 0.2% increase in total services output. In the most recent 3 months to February, services output rose by 0.5% compared with the 3 months to November 2016. However, this 3-month on 3-month figure has slowed in each consecutive month since the 1.0% growth recorded in October 2016.

Figure 4 shows that the 0.2% rise in February was driven wholly by an increase in distribution, hotels and restaurants activity (up 1.2%), with the other main components of the services industry remaining largely unchanged – transport, storage and communication fell slightly by 0.1%, while both business services and finance, and government and other services were virtually flat. Within distribution, hotels and restaurants, the main contributors to growth were retail trade, and food and beverage service activities, contributing 0.7 percentage points and 0.4 percentage points respectively.

Figure 4: Index of services by selected components and total services

Download this chart Figure 4: Index of services by selected components and total services

The rise in services output in February is in contrast to other short-term indicators of economic activity released earlier this month, which showed production and construction output both falling in February (by 0.7% and 1.7% respectively). However, output in the production, construction and services industries all recorded positive 3-month on 3-month growth in February.

Figure 5 shows the consumer price inflation including owner occupiers’ housing costs (CPIH), and the more erratic components of the index – food and non-alcoholic beverages, alcohol and tobacco, and energy. By excluding these more volatile components we can look at the underlying “core” CPIH inflation, also shown in Figure 5.

Over the last 5 years, the 12-month growth in core CPIH has remained relatively flat. Headline CPIH growth fell close to 0% in 2015, as prices of energy and food and non-alcoholic beverages fell. Despite the more volatile components driving the fall in the CPIH 12-month rate, core CPIH also fell in 2015.

1.The “Energy” category includes the Classification of Individual Consumption According to Purpose (COICOP) group Electricity, gas and other fuels, and the fuels and lubricants class.

Both the headline CPIH and core CPIH 12-month rates have increased gradually since November 2015. For headline CPIH, this has been largely driven by the energy component, primarily from fuels and lubricants. More recently, prices of food and non-alcoholic beverages have also started to rise following nearly 3 years of deflation.

Figure 6: Average deposit as a percentage of average dwelling price

Download this chart Figure 6: Average deposit as a percentage of average dwelling price

Deposits for first-time buyers increased from an average of £32,000 at the beginning of 2008 to £61,000 in Quarter 1 2010. The increase in the deposit ratio was also driven by the fall in house prices over the same period.

As discussed in the prices economic commentary, the amount of new residential loans to borrowers fell over this period. The composition of these loans also changed, with a decline in the proportion of loans with high loan-to-value (LTV) ratios.

Headline labour market indicators show 39,000 more people in work in the 3 months to February 2017, driving the employment rate to 74.6%. As shown in Figure 7, the overall employment rate has been increasing since 2011.

The number of vacancies reached 767,000, up 14,000 from the same period a year ago. Similarly, the number of unemployed people per vacancy declined to 2.0 in the 3 months to February 2017. By industry, accommodation and food service activities (up 8,000) was the largest contributor to the increase in vacancies in the quarter, as shown in Figure 8.

The headline 16 to 64 years economic activity rate was 78.4%, slightly higher than for September to November 2016 (78.3%). In contrast, the aged 16 and over participation rate declined to 63.5%. The recent divergence between the aged 16 and over participation rate and the 16 to 64 economic activity rate reflects a falling number of economically active individuals aged over 65: in the 3 months to February 2017, this number decreased by 3.9%.

Figure 9 shows rates of seasonally-adjusted nominal and real wage growth since 2007, using 3-month averages compared with the previous year. Average weekly earnings, including bonuses, grew by 2.3% in the 3-month period to February 2017 compared with a year earlier. Wages have been adjusted for inflation using the consumer price inflation including owner occupiers’ housing costs (CPIH). Once adjusted for inflation, in this analysis, average weekly earnings increased by 0.3% including bonuses compared with a year earlier. Estimates of growth in total real pay (including bonuses), in this analysis, differ slightly from the published estimates in Analysis of real earnings: Apr 2017 due to a different method of implementing the seasonal adjustment.