Quarterly estimates of price changes for services provided by UK businesses to other UK businesses and government, for a limited range of service industries.

Professional, scientific and technical activities showed the largest upward contribution to the annual and quarterly rate. Prices increased by 1.9% in the year to Quarter 2 of 2016 and 0.4% between Quarters 1 and 2 of 2016.

Water supply, sewerage and waste management services showed the largest downward contribution to the SPPI, decreasing by 3.7% in the year to Quarter 2 of 2016.

The Services Producer Price Indices (SPPI) provides a measure of inflation for the UK service sector. It is constructed from a statutory quarterly survey which measures changes in the price received for selected services provided by UK businesses to other UK businesses and government. Individual SPPIs are available which provide information on price change for a selection of service industries. These individual price indices are also aggregated together to create a service industry SPPI with limited coverage (it does not provide full coverage of the “service sector”).

The primary use of the SPPI is as a deflator in the UK National Accounts. However, it is also important as an inflationary measure to inform monetary policy and to account for inflation in long-term service procurement contracts. For more information on the use made of SPPI please see the separate document Users of Services Producer Price Index data.

The figures presented in this statistical bulletin are considered provisional for the latest 2 quarters (Quarters 1 and 2 of 2016) and may be revised as late data is received.

None of the indices presented in this bulletin are seasonally adjusted.

The service sector is estimated to account for around 78% of the UK economy based on its weight in gross domestic product (GDP). We do not produce an index for every industry in the service sector and so the SPPI is a partial, best estimate, of the overall inflation to UK businesses in the service sector. The SPPIs presented in this statistical bulletin are estimated to represent 59% of the total service sector at industry level. The indices' coverage of the service sector at standard industrial classification (SIC) class, division and section level is available in the SPPI coverage document. As resources allow, we will continue to review the existing indices and expand coverage through developing indices for new industries. As such, the SPPI will change composition from time to time but will always remain our best estimate of inflation in the UK service sector. The fact that coverage may change over time should be considered when deciding which indices best meet your needs.

Looking at the latest estimates (Table A) of the index for Quarter 2 of 2016, the main movements were:

Price increases for professional, scientific and technical activities, information and communication, and real estate activities, provided the main contributions to the rise in the SPPI in the year to Quarter 2 of 2016.

Information and communication prices increased 1.6% in the year to Quarter 2 of 2016. Increases in the prices of computer software and book publishing services contributed towards this increase, with prices increasing 1.5% and 3.4% respectively in the year to Quarter 2 of 2016. The increase in computer software prices was due to a rise in the prices for maintenance and support of software systems and applications.

The SPPI increased 1.2% in the year to Quarter 2 of 2016, compared with an increase of 1.3% in the year to Quarter 1 of 2016. Figure D shows how the SPPI sections have contributed towards this 0.1 percentage point change. Decreases in the prices for accommodation and food, real estate activities, and administrative and support services were offset by increases in the prices for water supply, sewerage and waste management, information and communication, professional, scientific and technical services, and transportation and storage.

Download this chart Figure D: Contribution to the change in the 12-month growth rate between Quarter 1 (Jan to Mar) 2016 and Quarter 2 (Apr to Jun) 2016 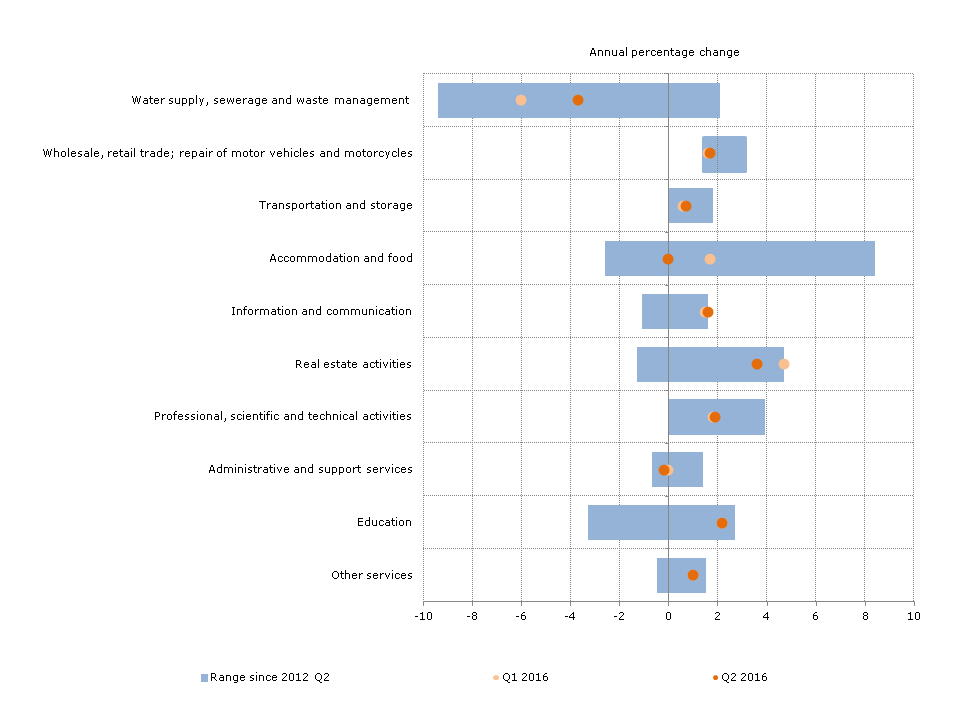 The largest increase in the quarterly rate came from water supply, sewerage and waste management, which increased by 2.9% between Quarters 1 and 2 of 2016 (Table C and Figure F).

The Services Producer Price Index (SPPI) captures changes in the prices received by UK business for the provision of a selection of services to other UK businesses and the public sector. For many services, the cost of labour is the largest component of the price charged by businesses for providing the service, rather than the cost of goods or fuels. As a result, a change in the wage structure of the workforce can have an important impact on the SPPI. It is expected that the price charged for services should move in a similar way to the wages received by the UK workforce. Figure G shows the annual percentage change of the fees received by UK businesses for the provision of services, as estimated by the SPPI, with an indicator of salaries received by the UK workforce who are employed in the service sector, as estimated by the average weekly earnings (AWE) “services” pay index (excluding bonuses).

The rise in service sector wage growth reflects some wider tightening in the UK labour market. Following strong employment growth over the past 2 years, the unemployment rate among those aged 16 and above fell to 4.9% in the 3 months to June 2016, below the pre-downturn (2000 to 2007) average of 5.1%. The employment rate rose further to 74.5% in the 3 months to June 2016 for those aged between 16 and 64, which is the highest rate since comparable records began.

While the tightening labour market may be exerting upward pressure on wages, the productivity of labour also influences wage growth. Improvements in productivity creates capacity for output to rise faster than the corresponding rise in inputs, thereby allowing firms to produce more output per unit of labour employed. Productivity growth allows for output prices to rise more gradually, all else being equal. Unit labour costs in the services sector – which measures the labour cost per unit of output produced – increased by 0.1% in Quarter 1 of 2016 compared with the previous quarter. This was slightly higher than the quarterly growth in unit labour cost in Quarter 4 of 2015, which contracted by 0.2%. This could indicate labour costs exerting upward pressure on services prices.

While there are a number of factors affecting services prices, the demand for goods and services in the UK economy could also have an impact on services prices. The latest estimate has shown GDP increasing by 0.6% in Quarter 2 of 2016, compared with 0.4% in the previous quarter. Much of this growth has been concentrated in the services industry, with services output increasing by 0.5%, only slightly slower than growth in the previous quarter, which was 0.6%.

While the SPPI measures the amount received by a company for services they’ve provided to other businesses, the prices paid by households is estimated by the Consumer Price Index (CPI). While the costs associated with providing services to both businesses and households will be broadly similar, there may be different costs associated with providing services to different customers. Figure H shows a comparison with the “all services” sector of the Consumer Prices Index (CPI) which measures the prices paid for services by households.

Generally inflation in the CPI “all services” index runs at a higher rate than the SPPI. Between late 2005 and 2008 the gap between the SPPI and CPI annual rate of inflation narrowed before widening again from 2009 to present. During the economic downturn in 2008 to 2009, the annual rate of inflation for both indices decreased, with prices falling by as much as 1.6% for services sold by UK businesses, while the prices paid by households continued to grow, although at a much lower rate, reaching a low of 2.3% in Quarter 4 of 2009. Since Quarter 4 of 2010 both indices have shown growth; however, the SPPI has shown significantly lower growth than CPI.

Other measures of service sector inflation

There are other measures of service sector inflation available such as the Chartered Institute of Procurement and Supply (CIPS) Purchasing Managers’ Index and the Confederation of British Industry (CBI) Service Sector Survey. There are significant methodological differences between these surveys and SPPI; therefore, direct comparisons cannot be made.

All countries within the European Union are required to produce a measure of producer price inflation for the services sector under the Short Term Statistics Regulation. Figure J shows the growth rates of service producer prices for a selection of EU countries from Quarter 1 of 2011 to Quarter 1 of 2016; this is the latest comparable data available for most of the countries represented.

In Quarter 2 of 2016, movements in the net sector SPPI were:

Generally, the movements of the net sector SPPI are similar to those of the gross sector indices (Figure J).