The rise in the CPIH annual rate was mainly due to increased air fares in April because of the timing of Easter. In addition, rising prices across a range of clothing items also helped push up the annual rate of inflation.

The prices of raw materials and goods leaving factories were little changed on the month as the value of sterling continued to increase.

Annual house price growth continued to slow across the UK but particularly in London. 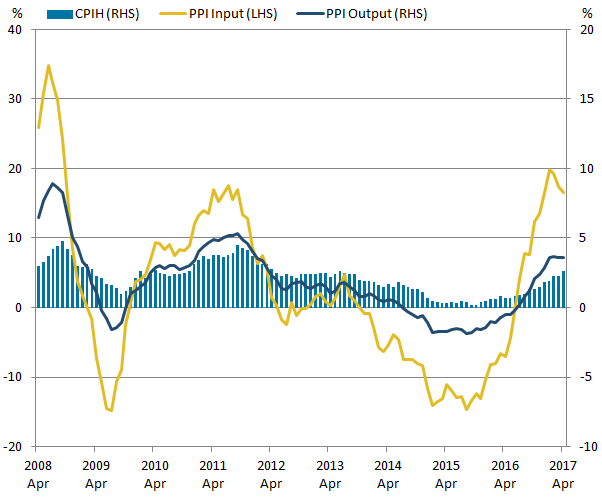 Figure 1 shows that the 12-month growth in the Consumer Prices Index including owner occupiers’ housing costs (CPIH) was 2.6% in April 2017.

We introduced our new economic "theme days" in January 2017, which will ensure that related economic statistics are released together. The separate bulletins relating to the Prices theme day contain details of the new data published and important information on how to interpret the statistics.

Rising air fares were the main contributor to the increase in the 12-month rate of the Consumer Prices Index including owner occupiers’ housing costs (CPIH) between March 2017 and April 2017. In turn, this is largely due to Easter falling later in 2017 compared with 2016.

Figure 2 explores this “Easter effect” in more detail. It shows the air fares component of CPIH, for the years 2011, 2014, 2016 and 2017, indexed to January=100 for each year. In the chart legend, the month in the bracket indicates which month Easter fell in that particular year. Higher prices seen in air fares around the Easter holidays feed through into the CPIH for March or April, depending on when Easter falls in relation to the air fares collection period1, and tend to be compounded if Easter fell in a different month in the previous year.

Over the longer term, the trend in passenger air fares is broadly upwards with predictable seasonal variations around the school holidays. Figure 3 shows the index for the passenger transport by air component of CPIH from January 2005 to April 2017, overlaid with three distinct trend lines. Between 2005 and 2008, and since 2014, the trend in the price of passenger air fares has been broadly flat, although volatility in prices has been increasing over the period.

Figure 4 shows that input producer prices have grown by 16.6% between April 2016 and April 2017, the third consecutive month of slower growth. This has coincided with a relative strengthening of the sterling effective exchange rate since October 2016 (shown as a downward movement in the inverted exchange rate 12-month growth rate in Figure 4), which is now around 7.8% lower than in April 2016.

While the Services Producer Price Index (SPPI) measures the price received by a company for services they have sold to other businesses and government, the prices paid by households can be estimated by looking at the “all services” special aggregate of the Consumer Prices Index including owner occupiers’ housing costs (CPIH). While it might be expected that the costs associated with providing services to businesses and households will be broadly similar, there are a number of reasons why this may not be the case, for example, the mix of services provided to households may be different to the mix of services provided to other businesses. Figure 5 shows a comparison between the SPPI with the “all services” special aggregate of the CPIH.

Figure 5 shows that in general, inflation in CPIH “all services” runs at a higher rate than the SPPI. During the economic downturn in 2008 to 2009, the annual rates of growth for both indices decreased and then partly increased in 2010. In the latest comparable period, Quarter 1 (Jan to Mar) 2017, the SPPI annual growth was 1.0% while the CPIH “all services” 12-month growth rate was 2.5% over the same period.

Figure 6 shows the UK, London and Inner London house price indices indexed to January 2016=100. This shows the price movements of average house prices in these regions compared with the UK as a whole since January 2016.

Within Inner London, Figure 7 shows how average prices have changed since January 2016 by property type.

These data show that average prices in Inner London for detached, semi-detached and terraced houses grew by around 5% to 6% from January 2016 until September 2016. Since then, prices have fallen back for these types of property but remain around 2% to 3% higher than in January 2016 in the latest period (March 2017). The average price for flats in Inner London has seen more steady growth over the period and is now also around 3% higher than it was in January 2016. The sharpest fall is seen in the latest period, although these estimates could be revised as more data become available in future months1.