“Inflation has risen to its highest rate for almost three and a half years with price increases seen across a range of items but with food and fuel having the largest impact.

"Prices for manufacturers stayed broadly constant in February, though the annual growth rate for goods leaving the factory gate remains at levels not seen since 2011.

“House prices continued to rise into January, albeit at a slightly slower rate than the 2016 average.”

We introduced our new economic "theme days" in January which will ensure that related economic statistics are released together. The separate bulletins relating to the Prices theme day contain details of the new data published and important information on how to interpret the statistics.

The House Price Index annual tables have also been updated to 2016 and are used in this commentary.

In line with the change in the UK consumer price inflation bulletin, the analysis in this article will be on movements in the Consumer Prices Index including owner occupiers’ housing costs (CPIH). This extends the Consumer Prices Index (CPI) to include a measure of the costs associated with owning, maintaining and living in one’s own home, known as owner occupiers’ housing costs (OOH), along with Council Tax.

Figure 1 shows that the Producer Price Index (PPI) input (left-hand scale) and PPI output indices (right-hand scale) move in broadly similar ways over time, although the movement in manufacturers’ input prices is considerably greater than for manufacturers’ output prices. The 12-month input PPI increased by 19.1% in February 2017 while output PPI increased by 3.7%. Both these figures are broadly unchanged on the 12-month growth rate in January, indicating little change in prices in the month or from base effects.

The 12-month growth in the Consumer Prices Index including owner occupiers’ housing costs (CPIH) increased to 2.3% in February from 1.9% in January. The February rate for CPI is also 2.3% and is above the Bank of England’s target for inflation for the first time since December 2013. 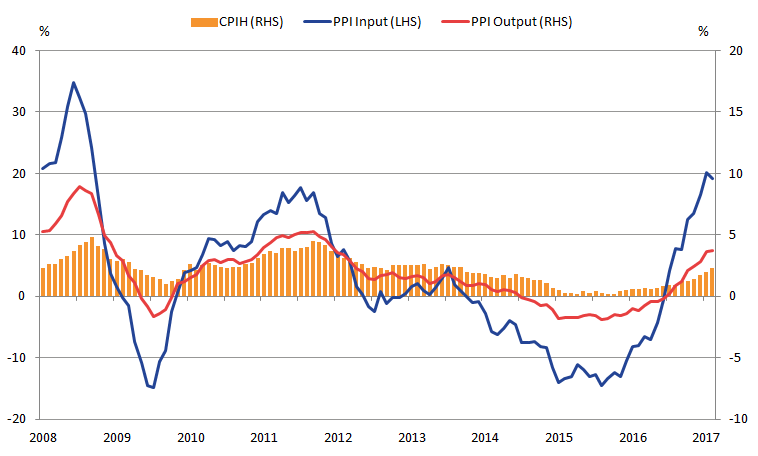 Our preferred method to measure owner occupiers’ housing costs (OOH) is the rental equivalence approach, which imputes owner occupiers’ housing costs from the rents paid for equivalent rented properties. Given that OOH account for around 17% of CPIH, it is the main driver for differences between the CPIH and CPI inflation rates. While CPIH and CPI show similar trends over time, movements in OOH have resulted in differences in the rates.

To further understand the movements in the OOH component, Figure 2 plots the 12-month growth rate for the Index of Private Housing Rental Prices (IPHRP) against the OOH component of CPIH. The IPHRP measures the change in price of renting residential property from private landlords. It uses the same source of rental data as OOH but the weights used to create the different series are designed to reflect the different housing mix that can be found in the private rental market compared with the owner-occupied market.

While rental price growth in London has slowed in recent periods, the latest data show continued growth in IPHRP (England excluding London) and OOH. OOH was less affected by the movement in London rental prices because London has a lower weight in the OOH series. This reflects the fact that London has a smaller proportion of total owner-occupier housing stock, compared with rented properties. Figure 3 shows the proportion of the total owner occupied and rented dwelling stock that is accounted for by each region. Expenditure weights for IPHRP and OOH are calculated by multiplying these dwelling stock counts from the Department for Communities and Local Government (DCLG) by average rental prices.

The 12-month growth rate for food within CPIH was 0.3% in February 2017, up from negative 0.4% in January. This is the first month of positive food price growth since April 2014.

Figure 4 shows the contributions to the 12-month growth rate of food by class of product. Positive contributions are mainly from fruit and fish, offset by negative contributions from vegetables and meat. The impacts of widely reported shortages of some vegetables in February were seen in rises in individual product prices such as lettuce during the month, but over 12 months, vegetable prices were still 0.9% lower in aggregate than in February 2016.

Figure 4: Contributions to the 12-month rate for CPIH Food group, by class 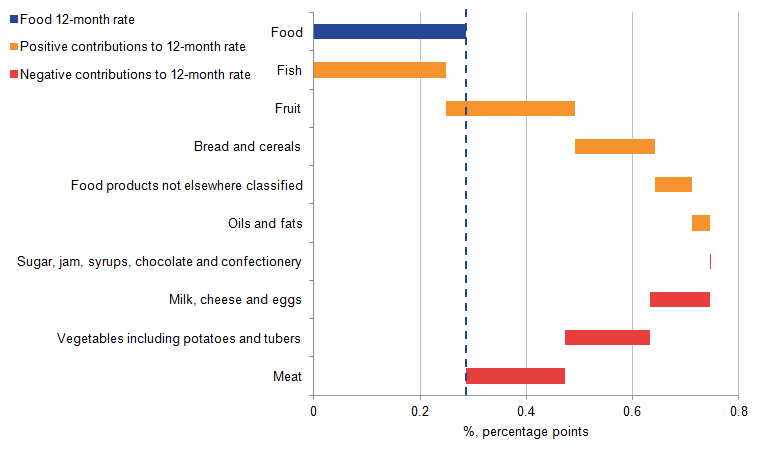 Download this image Figure 4: Contributions to the 12-month rate for CPIH Food group, by class

Figure 5 shows the change in the contributions to Producer Price Index (PPI) output price growth from different types of products supplied by UK manufacturers since February 2013. From the beginning of 2015 to mid-2016, refined petroleum products were the largest contributor to output price deflation, reflecting lower global oil prices. From December 2016 however, refined petroleum products became the largest contributor to output price inflation which has continued into February 2017.

The contribution to PPI output inflation from chemical and pharmaceutical products also continued to grow in February 2017. For 5 consecutive months, food products have also been contributing positively to output price growth, with the contribution steadily increasing in size each month.

Figure 6 shows the cumulative percentage of house buyers, using a mortgage, by the price they paid in 2016 compared with 2006. House buyers are categorised into first-time buyers and former owner-occupier buyers.

The data show that there has been an upward shift in the distribution of house prices for both first-time buyers and former owner-occupiers using a mortgage between 2006 and 2016. For example, 15% of first-time buyers bought their houses for under £80,000 in 2006; however, this has fallen to approximately 7% in 2016. In contrast, there has been a large increase in the share of properties bought by first-time buyers at more than £200,000 (16.8% in 2006 compared with 39.3% in 2016). These figures are likely to be influenced by high average London property prices.