“The fall in inflation is due mainly to cheaper gas, electricity and petrol, partly offset by rising ferry ticket prices and air fares falling more slowly than this time last year.

“House prices continued to grow, albeit at the lowest UK annual rate since July 2013, with growth in the North East and London lagging behind Northern Ireland, Wales and the West Midlands.”

Figure 1 shows that the 12-month growth rate of the Consumer Prices Index including owner occupiers’ housing costs (CPIH) was 1.8% in January 2019, down from 2.0% in December 2018. The largest downward contributions to change in the 12-month rate came from falls in gas and electricity prices, followed by single-night hotels, and petrol and diesel prices. These downward effects were partially offset by increased air and sea fares. 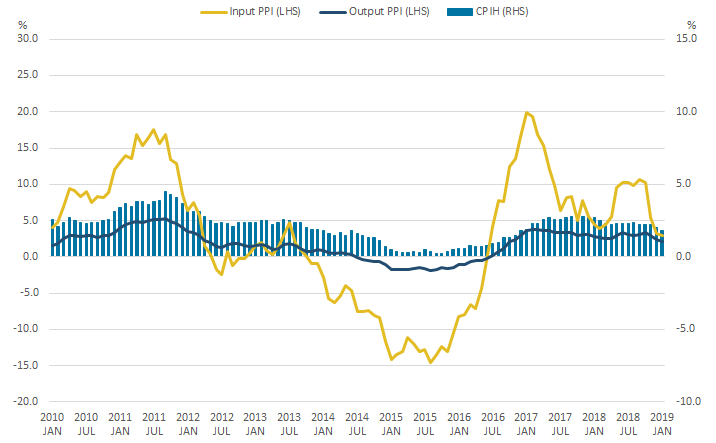 Figure 2 shows movements in the Ofgem wholesale price for electricity as well as the electricity component of the Consumer Prices Index including owner occupiers’ housing costs (CPIH) between January 2012 and January 2019. Figure 3 shows the equivalent series for gas.

Consumer prices reflect more than just wholesale prices as they also include the cost of transmission, distribution and regulatory costs, as well as profits for energy suppliers and others in the supply chain.

Consumer prices for electricity increased between January 2017 and December 2018, reflecting trends in wholesale prices, which were also broadly increasing from June 2017 to September 2018. More recently, wholesale electricity prices have fallen by 8.1% between September and November 2018. Consumer prices for electricity have also fallen in January 2019, dropping by 4.9% since December 2018, their largest one-month fall since April 2009, when they fell by 5.1% on the month.

The fall in consumer prices for electricity in January 2019 contrasts with the lack of movement in consumer prices when wholesale prices fell in 2014 and 2015, and may partly reflect regulatory changes that came into force in England, Wales and Scotland on 1 January 2019. The energy regulator, Ofgem, introduced a cap on energy prices that applies to “standard variable” energy tariffs, in addition to pre-existing caps on prices for prepayment meters and for those in receipt of the government’s Warm Home Discount, and puts an upper limit on the price a supplier can charge per unit of energy.

The adjustment to meet the new cap likely accounts for some of the fall in consumer prices in January 2019. Any effect of the cap may be particularly pronounced in CPIH movements, as the basket is based on data for gas and electricity prices on prepayment meters and variable rates (both of which are subject to the cap), and therefore does not necessarily reflect movements in prices for fixed-rate contracts (which are not subject to the cap for most consumers).

The current capped rate is effective until 31 March 2019, after which a new rate will be applied, intending to reflect changes in underlying costs faced by energy suppliers, including wholesale prices. On 7 February 2019, it was announced that the cap would increase by 10%, effective from 1 April 2019 until 30 September 2019. The rate will be reviewed again prior to September 2019.

Figure 3:Figure 3: Price indices for wholesale gas and the gas component of CPIH

Download this chart Figure 3:Figure 3: Price indices for wholesale gas and the gas component of CPIH

Figure 4 shows movements in the 12-month growth rate for the Consumer Prices Index including owner occupiers’ housing costs (CPIH), as well as movements in the core and non-core components of CPIH from January 2007 to January 2019. Core CPIH strips out some of the more volatile series of CPIH, specifically energy, food and non-alcoholic beverages, alcohol and tobacco, so the extent to which overall CPIH varies from core CPIH depends on the scale of the movements in these more volatile series at the time.

Figure 5 shows movements in the 12-month growth rate for core inflation for CPIH, the input Producer Price Index (PPI) and the output Producer Price Index (PPI) from January 2007 to January 2019. Core output PPI excludes food, petroleum, and alcohol and tobacco, with core input PPI being weighted to represent inputs into core industries, including a lower weight for crude oil and food. All three core inflation measures tend to increase and decrease around the same time but core input PPI shows much larger movements than those seen in output PPI and CPIH.

Figure 6 shows movements in the index series for core input PPI, core output PPI and core CPIH from January 2007 to January 2019. Core output PPI prices and core consumer prices have increased fairly steadily over the period, while core input PPI prices have shown much greater volatility. Nonetheless, in recent months, prices for core components of all three series have been at their highest level over the period.

Figure 7 shows the annual growth rate in house prices in England, Northern Ireland, Scotland, Wales and the UK, between January 2015 and December 2018. Scotland has seen the largest variation in house price growth over the period, with the annual rate peaking at 10.4% in March 2015 before falling to a low of negative 2.5% in March 2016, but it has been consistently positive since. Northern Ireland has seen relatively high growth throughout the period and had the highest growth rate of all the countries in December 2018 at 5.5%.

Annual growth in UK house prices has been falling fairly consistently since early 2016 and largely reflects trends seen in England, with annual growth in December 2018 at 2.5% for the UK and 2.3% for England. This slowdown has been driven largely by London, which has had negative annual house price growth in 9 of the last 10 months, most recently being at negative 0.6% in December 2018. These trends may also be spreading beyond London, as explored in previous analysis, with neighbouring regions of the South East and East of England seeing relatively low annual growth in recent months, at 1.2% and 0.2% respectively, in December 2018.

Annual house price growth in Wales has been relatively high over recent months, consistently outpacing the UK growth rate since May 2018, and ending 2018 at 5.2%, second only to Northern Ireland. This recent growth is likely linked to increased demand for properties on the Welsh side of the Severn Estuary since it was announced, in July 2017, that tolls would be removed from the M48 Severn Bridge and the M4 Prince of Wales Bridge, which took effect in December 2018.

Figure 8 shows the annual growth rate in house prices from January 2015 to December 2018 for the fastest growing local authorities in Wales, as of December 2018. The two local authorities with the highest house price growth in December 2018 were Torfaen and Newport, both of which are relatively close to the Severn Estuary and have seen relatively high house price growth for several months. Price growth in these areas may reflect increased demand for properties on the Welsh side of the Severn Estuary, as average prices are typically lower than on the English side of the estuary and the removal of the bridge tolls may make it more affordable to commute across the estuary for work.

High annual growth rates are also seen in Blaenau Gwent and Merthyr Tydfil, the two local authorities with the lowest average house prices in Wales, at £87,000 and £101,000, respectively, in 2018. These two local authorities are relatively close to Torfaen and Newport so may also be seeing some effect from the removal of the bridge tolls, perhaps including increased demand from people who would previously have bought property in Newport or Torfaen but may instead look elsewhere in light of recent price increases in those areas.

However, the current growth rate in Blaenau Gwent and Merthyr Tydfil may also reflect volatility in house price growth due to their lower average prices, as relatively small increases or decreases in average prices would account for a higher proportionate increase or decrease in these local authorities than elsewhere where average prices are higher. Both Merthyr Tydfil and Blaenau Gwent have seen average house price growth above 12% at times in recent years, higher than their current growth rates.

In addition to the removal of the Severn Bridge tolls, house price growth in Wales may also reflect tax changes introduced in 2018. From 1 April 2018, the Welsh Government replaced Stamp Duty with the Land Transaction Tax, leading to properties purchased in Wales being subject to different rates of tax than properties of the same value purchased in England.

For a main residential property, buyers in Wales would not have to pay any tax on properties between the values of £0 to £180,000 whereas, in England, there is a tax of 2% on properties with a value of £125,001 to £250,000 for former owner occupiers. The effects of this tax change are likely to be complex and subject to a range of different factors for each individual property purchase but may provide further incentive to purchase property below the value of £180,000 in Wales. Prior to 2018, only three Welsh local authorities – Monmouthshire, the Vale of Glamorgan and Cardiff – had average house prices above £180,000.