The debt and deficit of the UK public sector explained

So just what do all these numbers mean? Here, we explain.

First of all what is the public sector?

What does it do with money?

It receives and spends money continually throughout the year.

The money it receives mainly comes from taxes (such as income tax and VAT) and social contributions (such as National Insurance) but it also comes from rents, fines, licences and interest payments on money it has lent out.

The money it spends goes on two different areas:

What happens if public sector income and spending do not match up?

If the public sector receives more than it spends, it is said to be in “surplus”.

However there are two common ways of looking at the deficit:

The most widely used figure when talking about the public sector deficit is the PSNB figure. So in this piece, when we use the term “the deficit” we will be referring to the PSNB figure.

So is deficit the same as debt?

To make this more clear, let’s imagine this:

They then manage to only overspend by £50 for the next three years  - this is a deficit of £50 for three years running with a total accumulated debt of £650.

So even though they reduced their deficit after five years and ran a surplus for the last two years, they are still left with a debt of £450. 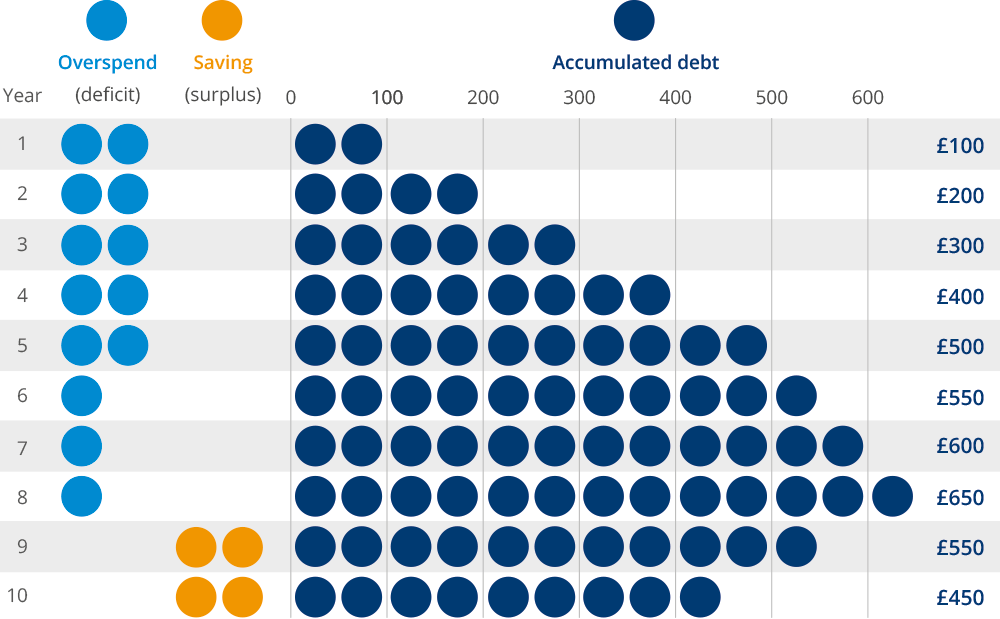 So whenever the public sector has to borrow to fund its yearly spending plans (i.e. runs a deficit), it will normally lead to an increase in the overall level of debt.3  Even if the deficit is reduced, the debt continues to rise, just at a slower rate. The debt can be significantly reduced if the public sector starts running a surplus and uses this money to pay off accumulated debt.

Comparing the two lines we can see that while the deficit has been on a downward trend since 2009, the level of debt has been continually rising. This is mainly because the UK public sector continues to run a deficit – which has been adding to the overall level of debt.

But what about interest on the debt?

We must also remember that in the example above we assumed a 0% interest rate. In the real world the public sector debt comes with interest that needs to be paid every year and the bigger the debt, the bigger the interest payments. In the year 2000 the public sector spent £26 billion on paying the interest on the debt, by 2011 it had risen to £46 billion and in 2015 it spent £36 billion5.

UK public sector spending on debt interest was £36 billion in 2015.

So how can the UK afford this debt?

The debt figure may seem very large but we do need to consider it in context. This is why we often see it expressed as a percentage of UK GDP (Gross Domestic Product).

Think of it this way, if I say I borrowed £1 million last year that sounds like a lot of money. But if I then say that last year I produced goods and services valued at £10 million, the borrowing only amounts to 10% of what I actually produced. Because the amount I borrowed has been put into context, it sounds more reasonable.

The same concept applies when expressing the public sector debt as a percentage of GDP because GDP measures the total value of everything the UK produces. This concept is also useful (and often used) when talking about the deficit or any large items of public sector spending.