This report provides details of how we developed and implemented search-as-you-type and address look-up online functionality for Census 2021.

In line with commitments made in the 2018 White Paper, Help Shape Our Future: The 2021 Census of Population and Housing in England and Wales (PDF, 967KB), the Office for National Statistics (ONS) has developed and implemented both search-as-you-type (SAYT) and address look-up online functionalities for Census 2021.

Census 2021 will be the most inclusive census ever. Many of the questions allow people to self-define by writing in their own response. The purpose of search-as-you-type (SAYT) is to help people to input their answers by allowing them to select from a list of suggested responses, without preventing other answers being stated.

SAYT can speed up responses and assist with spelling. This helps people to identify as they choose without dictating that they must use a response from the list. SAYT functionality allows users to type in the first few characters of a word or phrase before a pre-defined list appears in a drop-down to help them complete their answer.

SAYT will be available for write-in answers for the census questions on:

All write-in options within these questions will have SAYT functionality, except the "Any other mixed or multiple background" option in the ethnic group question. This is because of the diverse combinations, and respondents in testing reported preferring to write their own answers.

We concluded in Occupation, industry and travel to work question development for Census 2021 that we would not use SAYT functionality for questions on occupation and industry.

How the search-as-you-type functionality looks on screen

In the questions where SAYT is used for "other" and "elsewhere" response options online, there is text instructing respondents that they can enter their response on the next question as shown in Figure 1. Respondents will then be routed to another question, as shown in Figure 2, which asks for their specific answer and features the SAYT functionality. This was developed for SAYT functionality to meet accessibility design principles of not combining multiple functionalities on one page.

Figure 1: Online question on country of birth at the first stage 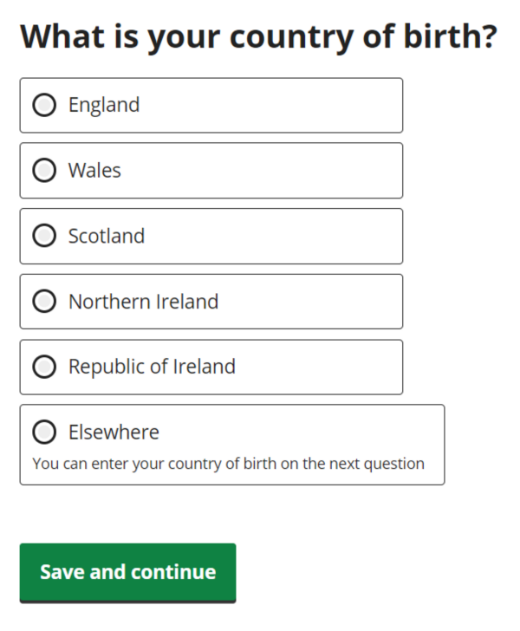 Download this image Figure 1: Online question on country of birth at the first stage

Figure 2: Online question on country of birth at the second stage 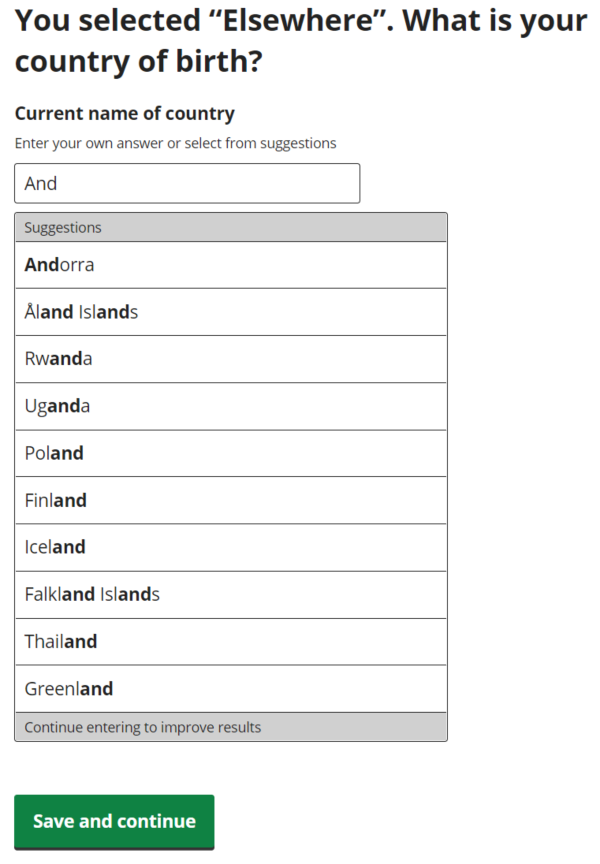 Download this image Figure 2: Online question on country of birth at the second stage

How the search-as-you-type functionality works

The use of suggestions in SAYT lists only allow one single entry. For questions where a respondent may want to add more than one single response, such as national identity and passports, specific guidance instructs to "Include all [national identities/passports]. If you have more than one, enter them all separated by commas.". In instances where a respondent wants to record multiple responses, the SAYT list will display suggestions on the first entry. After the respondent enters the comma, the entries that follow will not have suggestions provided. Respondents are encouraged to type over the SAYT functionality to enter their own answers.

How we developed the search-as-you-type lists

These initial SAYT lists were further developed using a mix of principles to ensure accurate and useful entries are suggested to the respondent. Topic experts devised specific methodologies, which also considered the public acceptability of entries and known user needs from previous stakeholder engagement and assurance panels.

The overall aim was to have an evidence-based approach that balanced supporting the maximum number of people with their write-in responses, while avoiding any inappropriate terms, and attempting to reduce respondent burden by not having too many similar or confusing entries presented.

The Office for National Statistics (ONS) also chose to include all tick-box response options from the England and Wales questionnaires as our research showed that respondents often write in an identity that appears as a tick-box response option. The inclusion of these tick boxes is part of the strategy to allow all users to identify as they wish.

To meet the Welsh Language Standard, the SAYT lists have been fully translated into Welsh for the Welsh language online census, which has been quality assured by the Welsh Government and Welsh Language Commission. These lists have also been harmonised as appropriate with SAYT lists proposed for the censuses in Scotland and Northern Ireland. We have also included any identities that appear as tick-box response options in the censuses in Scotland and Northern Ireland.

Address look-up functionality allows users to type in the first few characters of an address or postcode before a list of UK addresses appear in a drop-down to help them complete their answer. The address look-up functionality was developed from a product called Address Base Premium, which incorporates the Postcode Address File, the National Address Gazetteer and other sources.

Address look-up functionality will be available on the following questions:

For example, at the question "Do you stay at another address for more than 30 days a year?", if a respondent selected the response option "Yes, an address within the UK", they would be routed to a second stage question to provide the address details for that address.

To use the address look-up functionality the respondent starts entering the address details in the text field provided. Above this text field, but below the question stem, is hint text highlighting respondents to: "Enter address or postcode and select from results". The address look-up functionality will then provide suggested addresses that match either the first line of the address or the postcode with the addresses in the lists. These suggested addresses will be displayed under a "Select an address" title bar, but below the text field, once the respondent has entered at least five characters.

Figure 3: Online question on second address at the second stage 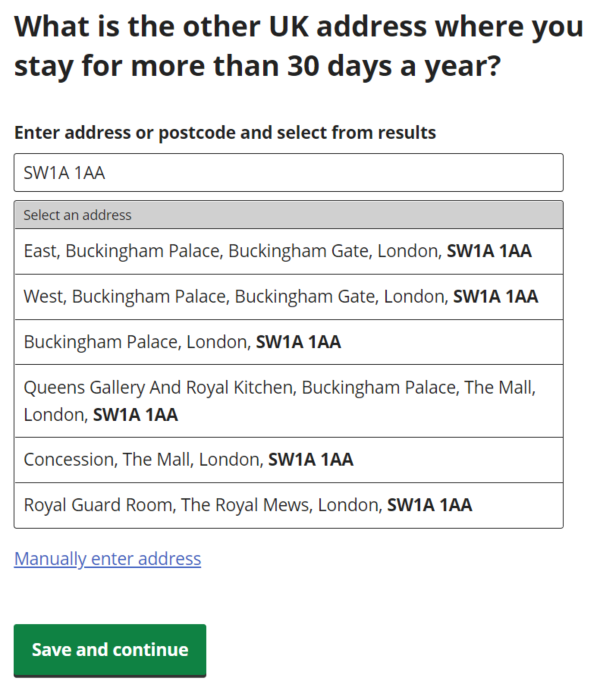 Download this image Figure 3: Online question on second address at the second stage

The addresses shown will depend on the characters entered. The more characters a respondent enters, the more refined the list of addresses will become. The matched characters appear in bold text.

If an address cannot be found, the respondent can select the option to “Manually enter address”, which takes the respondent to a separate screen to provide individual lines of the address.