The value of UK manufacturers’ product sales was £357.8 billion in 2015, a 1.3% decrease on the 2014 estimate of £362.5 billion and could be attributed to the fall in producer prices. This is the first contraction in manufacturers’ sales since the 2008 to 2009 economic downturn.

The manufacture of machinery and equipment not elsewhere classified division had the largest fall between 2014 and 2015 with £2.7 billion (9.7%) in the value of manufacturers’ sales.

A decline in the value of sales was also reported for divisions such as chemicals, food products and basic metals.

The manufacture of motor vehicles, trailers and semi-trailers saw the largest growth in the value of manufacturers’ sales in 2015, with an increase of £1.2 billion (2.6%) to £48.6 billion.

The UK’s share of total EU manufacturers’ product sales in 2015 is estimated to be around 10%.

PRODCOM covers product sales by UK manufacturers; this is not the same as UK retail sales, which refer to the sales of goods by retail businesses, or consumer purchases. Links to other manufacturing data sources are mentioned at section 8.

All estimates of the value of product sales are presented at current prices, meaning that they have not been adjusted for inflation; this is important to bear in mind when comparing value changes over time.

For division 19 (coke and refined petroleum products), we only include one product – “pitch and pitch coke, obtained from coal tar or from other mineral tars” which is covered within a single industry (19100: the manufacture of coke oven products). In 2015 there were no businesses within the PRODCOM sample population specifically classified to this industry.

Due to coverage, methodological, sample, or other differences, PRODCOM estimates may not always match figures given in other manufacturing data sources. Details on the PRODCOM survey methodology can be obtained from the PRODCOM technical report while products covered can be found in the PRODCOM list.

PRODCOM estimates are designated as National Statistics which means that the data have been produced in compliance with the Code of Practice.

The decline in the value of sales coincides with a fall in producer prices since 2014, which is largely attributed to the fall in oil prices as explained in Producer Price Index, December 2015 publication. The downward movement reported in this bulletin is broadly in line with other official data sources such as the Index of Production and the Annual Business Survey.

Even though the sales of UK manufacturers’ contracted in 2015 with just over half of manufacturing divisions (including machinery and equipment, chemicals and food products) contributing to the decline, the manufacture of motor vehicles, other non-metallic minerals, basic pharmaceutical products and other transport equipment all showed an increase of over 2.0% in product sales (Table 1).

Download this table Table 1: Contribution to growth and percentage change by division, 2014 to 2015, UK

Between 2014 and 2015, the manufacture of machinery and equipment not elsewhere classified reported a reduction in sales of 9.7% (£2.7 billion). The division saw the largest negative contribution (0.7 percentage points) to total UK manufacturing growth rate for 2015.

An industry that showed a large fall within this division is the manufacture of taps and valves. Specifically, “parts for taps, cocks, valves and similar appliances for pipes, boiler shells, tanks and vats”, saw the largest reduction in sales for any product in 2015, a fall of over £500 million (42.9%) from 2014. Anecdotal evidence from businesses responding to this survey indicates that a reason for the weak sales was a price fall in the oil and gas sector.

The UK manufacturers’ sales in the chemicals division were £20.3 billion in 2015, a contraction of around 1 billion pounds (5.2%) since 2014. In 2008, the manufacture of other organic-based chemicals was the largest industry within the chemicals division, with estimated sales of £4.5 billion. However by 2015, the value of sales (£2.4 billion) within the industry were almost half (46.9%) of that reported in 2008. At product level, the sale of mineral or chemical fertilizers containing nitrogen, phosphorus or potassium fell from £451 million in 2014 to £325 million in 2015, a fall of 27.9% (£126 million). This is the second consecutive year that sales for this product have declined by over £100 million.

Basic metals division reported sales of £6.0 billion in 2015, a decrease of 8.7% (£570 million) from 2014. This continues the decline first reported in 2012. A main driver was the decline in unwrought silver; with sales falling 95.9% since 2014. The negative contribution to growth by the metals sector has also been reported in the Index of Production, January 2016 release.

Since the economic downturn, the manufacture of motor vehicles, trailers and semi-trailers has grown at a faster rate than any other division. Sales in current prices increased 77.8%, from £27.4 billion (2009) to £48.6 billion (2015). This division generated the largest contribution to growth between 2014 and 2015 and is the only division to report increased sales of over £1.0 billion. All 4 industries within this division contributed to this growth. They are the manufacture of:

However, UK manufacturers’ sales of motor vehicles with petrol engine capacity above 1500cc contracted by 1.5% (£241 million) between 2014 and 2015. The sales value of this product has more than doubled between 2009 (£7.8 billion) and 2015 (£16.0 billion). The Society of Motor Manufacturers and Traders, the UK car industry’s trade body, announced that British car manufacturing has had its best year in a decade as exports reached a record 10-year high in 2015, despite a fall in demand from global markets such as China and Russia.

One industry that had strong sales which enhanced the growth of the motor vehicles, trailers and semi-trailers division is the manufacture of parts and accessories for vehicle bodies. The value of product sales increased by 11.2% (£327 million); from £2.9 billion in 2014 to £3.3 billion in 2015. Reasons for the increase suggested by businesses responding to this survey include new contracts for manufacturers to supply parts to the luxury car market and improved automation at some UK plants. Our Business Enterprise Research and Development survey confirmed that the motor vehicles and parts product group had the largest increase in R&D expenditure performed by UK businesses in 2015.

Other divisions which contributed to growth in the value of sales include other non-metallic minerals and pharmaceuticals. UK manufacturers’ sales in the other non-metallic mineral division have increased for a third consecutive year with growth of 7.0% (£805 million) since 2014, to £12.3 billion in 2015. At product level, the manufacture of ready-mixed concrete had the highest value sales within the industry, at £1.6 billion with increased sales of 24.9% (£326 million) between 2014 and 2015.

In particular, product sales of £5.7 billion for medicaments, excluding antibiotics, hormones, steroids, alkaloids and vitamins, represented half of all the divisional sales in 2015 and an increase of 4.6% (£250 million) since 2014.

The interactive tree map (Figure 2) can be used to explore the share of PRODCOM manufacturing divisions and industries to total UK manufacturers' product sales in 2015.

Figure 3 shows the 10 products with the highest sales value for 2015 and highlights the change in product ranking compared with 2010. 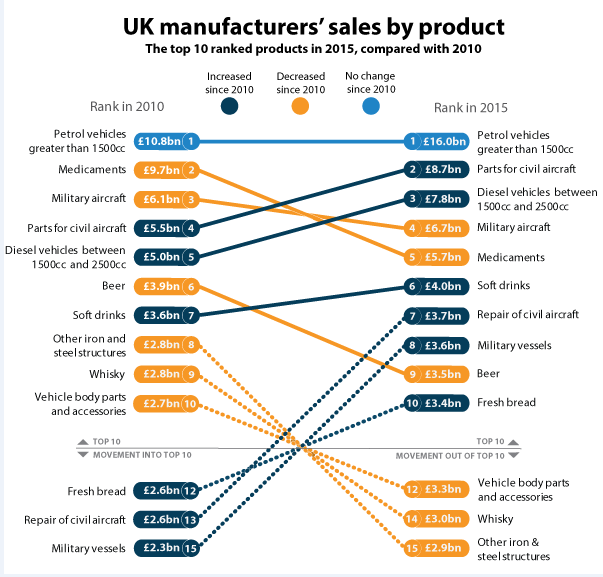 The second-ranked product (parts of civil aircraft) has a sales value of about half of the first-ranked product (motor vehicles with a petro engine capacity above 1500cc) and has moved up the ranking. Manufacturers for parts of civil aircraft have had a sustained period of steady growth since 2010 culminating in a sales value of £8.7 billion in 2015, an increment of 1.4% from 2014. The UK’s Aerospace, Defence, Security and Space trade body, the ADS group, has cited record customer orders.

The largest growth in sales among the top 10 was from the manufacture, installation and repair of military vessels. This product was outside the top 10 in 2010 but ranked eighth in 2015. Sales increased by 17.8% (£542 million), from an estimated £3.0 billion in 2014 to £3.6 billion in 2015. This increase comes at a time when businesses responding to this survey confirmed the completion of a large number of high-profile contracts.

Medicaments, excluding antibiotics, hormones, steroids, alkaloids and vitamins, remain a top 10 product despite a fall in the rankings from 2010.

The manufacture of fresh bread entered the top 10 products for the first time in 2015. Product sales have increased by 28.5%, since 2010, making it the product with the 10th highest value of sales in the UK.

UK manufacturers’ product sales outside the top 10 that recorded large decreases between 2014 and 2015 include:

The PRODCOM survey on production of manufactured goods is carried out annually by European Union (EU), under EU regulation to enable a comparison and, where possible, produce a picture of emerging developments in a European context.

Precise national figures are not published by the EU Statistical Office (Eurostat) and comparisons can be difficult to make as often estimates from other countries are suppressed, disclosive or largely estimated. However UK’s share of total EU manufacturers’ product sales in 2015 is estimated to be approximately 10%, behind Germany, France and Italy. The 5 countries, including Spain, accounted for around 70% of total EU sold production in 2015. Figure 4 shows the highest ranked products in 2015.

Germany has the highest motor vehicle production in the EU according to the European Automobile Manufacturers Association. Figure 4 shows that for Germany this includes the sale of motor vehicles with a petrol engine capacity below 1500cc (29.7%) and parts of vehicle bodies (44.3%). UK manufacturers’ share of these products was 5.4% and 9.9% respectively.

France is the leading EU member state for manufacturers’ sales of medicaments, excluding antibiotics, hormones, steroids, alkaloids and vitamins, at 16.2%, followed by Germany, (11.0%), UK (9.0%) with Spain and Italy recording sales value of 7.6% each.

About a third of EU manufacturers’ sales for parts for all types of aircraft are accounted for by the UK (31.6%) although Germany has a larger share (37.0%).

Whisky was 1 of 3 major products in which the UK had a share of over 80% of all EU manufacturers’ product sales, at 87.8%. The other 2 products were the manufacture of reaction engines within the aerospace industry (88.8%) and golf clubs and equipment (94.9%).

Products that were manufactured in other EU member states but not in the UK include ethylene, aeroplanes and other aircraft (for civil use) of an unladen weight greater than 15,000 kg and champagne (excluding alcohol duty).

Previous PRODCOM statistics which provide a time series from 2008 in excel datasets or 2013 in explorable datasets are available from our webpage.

Other data sources with information on manufacturing activity in the UK, including several listed in the UK government’s recent Manufacturing Metrics Review are:

PRODCOM estimates are based on a sample of businesses that are surveyed annually. Information on standard errors, response rates, revisions and annual product code changes can be obtained from the quality indicators pack which is available on our website. Standard errors are available for most products and inform users of the precision of the estimates. The 2015 provisional estimates are based on a response rate of 81.5%.

Our technical report describes the methodology and processes that are used to produce PRODCOM estimates. This includes information on sampling procedures, data collection and converting respondent data into published estimates. It complements the PRODCOM user guide which explains the variables and provides guidance on using the data correctly, including how to use the open data tables.

The Quality and Methodology Information report contains important information on:

The survey is based on the PRODCOM list, which comprises about 3,805 manufacturing products and some services. As PRODCOM is carried out across EU member states the list, and detailed product descriptions, are provided by the European Statistical Office (Eurostat) each year.