Intermediate estimates of UK manufacturers' sales by product (Prodcom) for 2016 and final estimates for 2015.

Prodcom covers product sales by UK manufacturers; this is not the same as UK retail sales, which refer to the sales of goods by retail businesses, or consumer purchases. Links to other manufacturing data sources are outlined in section 9.

All estimates of the value of product sales are presented at current prices, meaning that they have not been adjusted for inflation; this is important to bear in mind when comparing value changes over time.

For coke and refined petroleum products (division 19), only one product – “pitch and pitch coke, obtained from coal tar or from other mineral tars” – is included, which is covered within a single industry (19100: the manufacture of coke oven products). Since 2015 there have been no businesses within the Prodcom population specifically classified to this industry.

Due to coverage, methodological, sample, or other differences, Prodcom estimates may not always match figures given in other manufacturing data sources. Details on the Prodcom survey methodology can be obtained from the Prodcom technical report while products covered can be found in the Prodcom list.

Prodcom estimates are designated as National Statistics, which means that the data have been produced in compliance with the Code of Practice for Official Statistics.

This increase coincides with the rises shown in the ONS Annual Business Survey (ABS) as well as the Producer Price Index (PPI) and is mainly attributed to the motor vehicle division.

Since 2009 manufacturers’ product sales generated a year on year increase totalling £64.9 billion (22.0%) with the exception of 2014 to 2015 when there was a decline of £4.4 billion, before increasing again in 2016. The two largest divisions, the manufacture of motor vehicles, trailers and semi-trailers, and manufacturing of food products, contributed more than half of this growth (56.0%) at £27.3 billion and £9.3 billion respectively in 2009.

Overall, between 2015 and 2016, total UK manufacturers’ sales have increased; primarily led by increasing sales of both petrol and diesel cars within the motor vehicle division, which showed a £6.2 billion increase, however half of the divisions within the manufacturing, mining and quarrying sector have seen a decrease.

Download this table Table 1: Contribution to growth and percentage change by division, 2015 to 2016, UK

The manufacture of food products division remains the largest within the UK manufacturing sector, contributing £65.7 billion (18.0%) of total UK manufacturing in 2016. However, this division saw a decline in sales in 2016, falling by £456 million (0.7%). Falling sales of fresh bread and of milk and cream of a fat content by weight exceeding 1%, but not exceeding 6% (in immediate packings of net content exceeding 2 litres) accounted for much of the decline.

Between 2015 and 2016, manufacturers of motor vehicles, trailers and semi-trailers reported the largest increase in sales of £6.2 billion (12.8%). The motor vehicle division has seen sales double over the last seven years when the estimate was £27.4 billion in 2009. The division saw the largest contribution (1.7%) to the total UK manufacturing growth rate for 2016 of 1.8%.

These figures support data from the Society of Motor Manufacturers and Traders, the UK car industry’s trade body, who announced that UK car production achieved a 17-year high in 2016, with record levels of motor vehicle exports.

Manufacturing of basic pharmaceutical products, furniture and chemical products additionally contributed £2.7 billion to the overall rise between 2015 and 2016.

At 15.5%, the increase in sales from the manufacture of basic pharmaceutical products was the largest year-on-year percentage change increase across any division, with an actual increase of £1.7 billion. Medicaments for therapeutic or prophylactic uses provided the largest sales of £6.4 billion, an increase since 2015 of £1.3 billion (24.4%) and the highest sales reported for this product since 2012.

Sales from the manufacture of furniture increased by £512 million (7.6%) in 2016, which continues the growth seen in each year since 2009. This increase is driven by sales of wooden kitchen furniture and upholstered wooden framed seats such as three-piece suites.

Download this chart Figure 2: Divisional growth by percentage change, 2015 to 2016

While total manufacturers’ sales increased in 2016, 12 out of 25 divisions reported a contraction in sales. The manufacture of machinery and equipment not elsewhere classified reported a reduction in sales of £905 million (3.7%). This was the largest decline in sales in terms of value in 2016 and a direct result of declining sales of £711 million from the manufacture of machinery for mining, quarrying and construction. A lack of demand from the worldwide mining and energy sectors had a negative effect on sales of heavy machinery, which contributed to the fall.

Sales from the manufacture of basic metals have been declining since 2011, with a drop over the period of £3.0 billion (35.0%). Since 2015, sales within the division have declined by £403 million (6.8%). This decline is in-line with recent data published by the Annual Business Survey and is driven by a large fall in sales from the manufacture of tubes, pipes and fittings of steel.

Sales from the printing and reproduction of recorded media division declined by £378 million (4.8%) between 2015 and 2016. The main contributor to this decline was sales from the printing of newspapers, journals and periodicals, which have continually declined since 2010, by £545 million (53.4%). These contractions were also supported by the ONS Internet Access Survey data, which show that more people now use the internet to access the news. 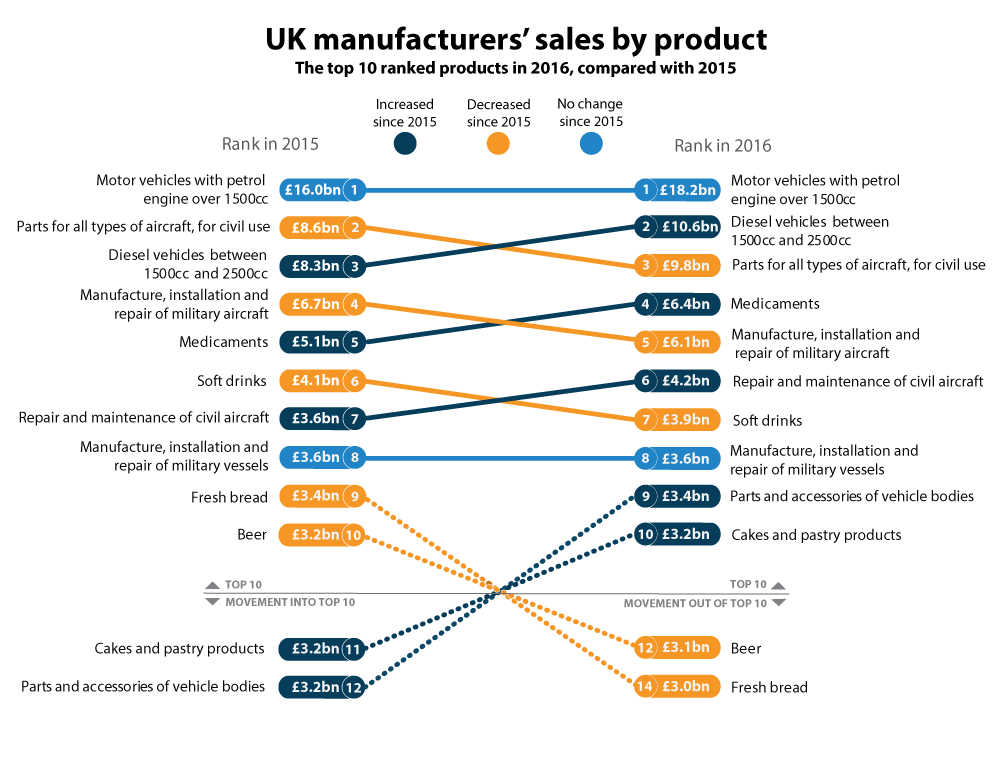 Sales from parts of civil aircraft increased by £1.1 billion (13.0%) to £9.8 billion in 2016, making this the third largest product produced in the UK. The UK aerospace trade association, the ADS group, attributes this to growth in global sales and demand as highlighted in their UK aerospace outlook report 2016. Increased sales within the aerospace industry are also reflected in the rising sales seen from manufacture, repair and installation of civil aircraft, which increased by £620 million and moved up to sixth on the list of the top 10 products. However, sales from the manufacture, installation and repair of military aircraft declined by £654 million in 2016, down 9.7% over the year, moving from fourth to fifth in the top 10 list.

Fresh bread and beer products both fell out of the top 10 products produced in the UK in 2016, with a decline in sales of £358 million and £89 million respectively. While beer sales declined, sales of gin (or Geneva) increased for the seventh year running, rising by £67 million (24.1%) to £348 million. Sales of gin are almost three-times higher than the £126 million sales seen in 2009.

In late 2015, England became the last nation within the UK to implement a charge on plastic bags from shops, which coincided with a decline in demand from customers. In 2016, manufacturers’ sales of plastic bags and sacks declined by £148 million (42.2%) to £202 m in 2016.

UK manufacturers’ sales 2015 final data have been revised up from £357.8 billion to £358.1 billion. The largest revision was within the manufacture of fabricated metal products, which was revised up by £900 million.

There are certain products within the EU where the UK produces a high proportion of the total. Some specific examples include golf clubs and golfing equipment, whisky, and parts for civil aircraft piston engines, where the UK contributes over 80% of the EU total.

The top three products produced by the EU member states reflect the top products in the UK. The leading products being:

Other data sources with information on manufacturing activity in the UK, including several listed in the UK government’s Manufacturing metrics review, are:

There are no major changes within this publication; however, we constantly aim to improve our bulletin and its contents to provide a more concise summary of the main statistics. We welcome feedback via email at ProdCompublications@ons.gov.uk or by telephone on +44 (0)1633 456720.

Standard errors are available for most products and inform users of the precision of the estimates. The 2016 intermediate estimates are based on a response rate of 81.4%.

Our technical report describes the methodology and processes that are used to produce Prodcom estimates. This includes information on sampling procedures, data collection and converting respondent data into published estimates. It complements the Prodcom user guide, which explains the variables and provides guidance on using the data correctly.

The survey is based on the Prodcom list, which comprises of 3,770 manufacturing products and some services. As Prodcom is carried out across EU member states the list and detailed product descriptions, are provided by the European Statistical Office (Eurostat) each year.

A report on Prodcom EU methodology is available from Eurostat.