The number and size of enterprises in Great Britain engaged in the international trade of goods and services, drawn from the Annual Business Survey.

The Annual Business Survey shows an increase in the number of registered businesses in the Great Britain non-financial business economy trading internationally, from 309,300 in 2014 to 326,200 in 2015.

Annual Business Survey (ABS) estimates of exporters and importers include details of the number and proportion of businesses in Great Britain (that is, the UK excluding Northern Ireland) engaged in the international trade in goods and services. This is categorised by employment size group, broad industry group, ownership (UK or foreign-owned), turnover and age of business, along with a regional breakdown.

These estimates are experimental official statistics.

International trade is defined as the import and/or export of goods and/or services.

These estimates cover the non-financial business economy in Great Britain (excluding Public administration and defence; Public sector health and education; Finance; Farming; and Household services) which accounts for just under two-thirds of the economy in terms of gross value added.

Registered businesses are those that are registered for VAT and/or PAYE; any reference to a “business” only covers this group.

Industry breakdowns of these data are based on the main activity of the business. For example, if a business undertakes both distribution and service activities, but most of its employment is within distribution, then the whole business will be classified as distribution.

Regional estimates are provided using different methodologies to those used for the other published breakdowns. The method for regional estimates involves apportioning out a trade status of a business to its local units based on employment. Our information paper contains further information on the methods used.

Total international trade is calculated as:

The latter are included in both the exporter and importer counts so need to be subtracted to avoid double counting.

The number of businesses in the Great Britain non-financial business economy trading internationally has increased by 17,000 between 2014 and 2015. This increase is in line with the overall increase in the number of registered businesses in the non-financial business economy, from 2.05 million in 2014 to 2.15 million in 2015. The share of businesses trading internationally has remained unchanged at 15.1%.

Figure 1: The proportion of businesses that import or export goods and services, 2015 Great Britain 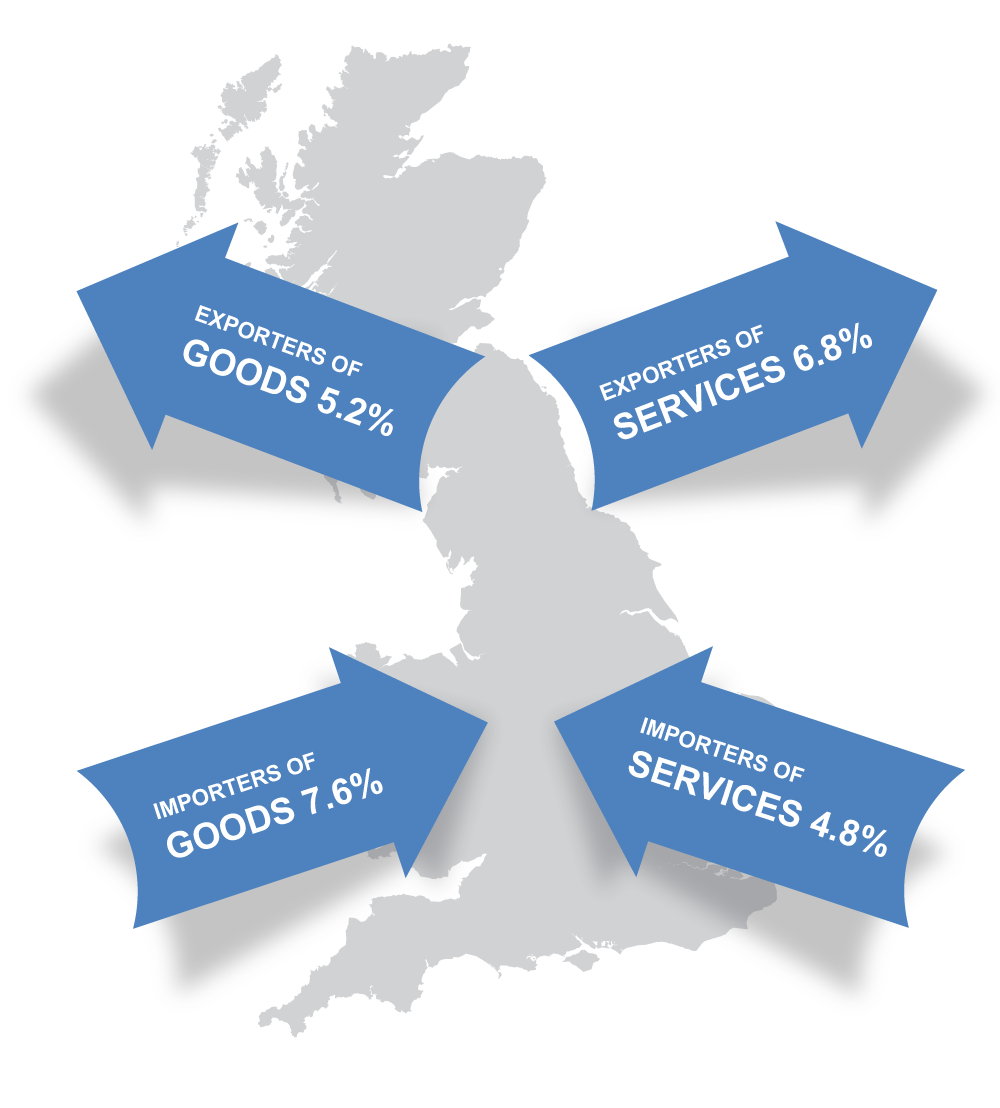 Download this image Figure 1: The proportion of businesses that import or export goods and services, 2015 Great Britain

The share of businesses exporting fell from 10.8% in 2014 to 10.6% in 2015. A reduction in the proportion of businesses exporting has not only been observed in the Annual Business Survey (ABS) but in our other statistical releases. The fall of exporting activities coincides with the continuation of the pound appreciating against its trading partners’ currencies (except for the US dollar) in 2015.