From a lack of living space to an increase in the number of widows and orphans, newly digitised county and district level statistics from the 1921 Census show changes after World War I and the Spanish Flu pandemic.

Just three years on from the end of World War I and in the wake of the Spanish flu pandemic, the 1921 Census took a snapshot of life in England and Wales and found a population forever changed.

For the first and only time, information was gathered on orphanhood status, offering insight into the possible effects of war and pandemic. The 1921 Census was also the first to recognise divorce as a marital condition.

As digitised tables, those relating to orphanhood and marital condition are limited to districts with a population over 50,000. While the analysis for this data has been carried out at district level, we have provided maps at county level to give better coverage of England and Wales.

Explore how areas compared with each other by using our interactive visualisations.

A larger difference was evident when comparing younger, narrower age groups of females. For example, 1.3% of women aged 25 to 34 years were widowed in 1911. By 1921, that had increased to 3.2% of females in the same age group.

Not all widowed spouses recorded in the census would have lost their husband or wife through war or pandemic, but for comparison, 239,000 widows and 393,000 children received a war pension in 1921 in Britain.

Around 228,000 people were estimated to have died in Britain from Spanish flu a large number of them fit and healthy. It is thought that in the UK, the virus was spread by soldiers returning home from the trenches in northern France during World War I.

The historic maps of England and Wales show areas as they were named in 1921 and your county may look different to how it does today.

The county-level data shown in this map gives a broader picture of the overall population, not captured in all districts.

Use the interactive to find out how many widows lived in your county.

Census data only gives current marital condition, as such the data here does not include individuals who have been widowed but have since remarried.

Meanwhile, the district with the lowest proportion of widowed females, was Rhondda urban district in the South Wales valleys, with 9% of women aged 15 and above.

Barrow in Furness county borough had the lowest proportion of widowed females aged 20 to 39 (2%).

Census data only gives current marital condition, as such the data here does not include individuals who have been widowed or divorced but have since remarried.

The largest number of marriage dissolutions recorded by age in 1921 amounted to 2,860 for people aged between 35 and 39 years.

Divorce was still relatively rare in England and Wales in 1921, and often a source of stigma and shame for those involved. It was also largely a preserve of those who could afford it.

A raft of legislation followed in 1921 which put males and females on a more equal footing by providing further grounds for divorce other than adultery or violence.

While there was a slight increase in divorces in the late 1920s, dramatic increases were not seen until the mid to late 1940s.

By the 1961 Census 0.8% of people aged 16 years and over were divorced (of marriageable age) and 9% were divorced or in a legally dissolved civil partnership by the 2011 Census.

Scanned image of the 1921 Census report for the Counties of Lincoln and Rutland depicting Table 14 on the topic of marital condition. The statistics being shown are for the county borough of the City and County of Lincoln. 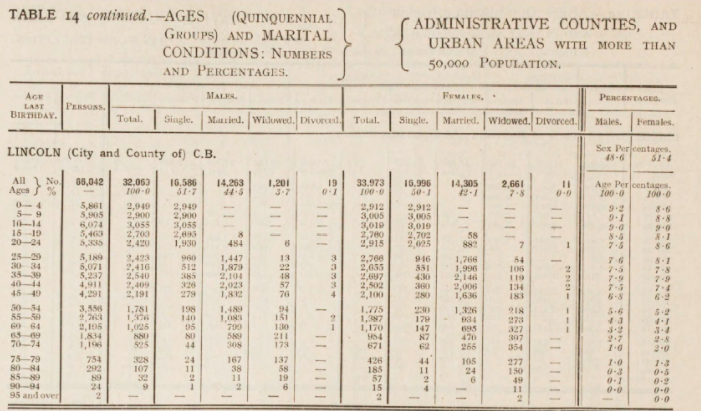 Download this image Scanned image of the 1921 Census report for the Counties of Lincoln and Rutland depicting Table 14 on the topic of marital condition. The statistics being shown are for the county borough of the City and County of Lincoln.

Details of orphanhood and dependency status was vital in a post-pandemic and post-conflict 1921. It helped prepare the financial framework of the Widows, Orphans and Old Age Contributory Pensions Act, 1925.

This would have been the first and only time that questions about orphanhood status were asked about children aged 14 and under in the 1921 Census.

That information, laid bare in black and white on the census form, showed for the first time how many orphans there were in England and Wales.

The two cold words on the census form, “father dead”, meant life without the “head of the family” for 730,845 children, as recorded in the 1921 Census.  Their absence would leave a lasting legacy for generations to come.

The number of children recorded as “mother dead” was 261,094, almost three times fewer than those without a father. Those who lost both parents numbered 55,245.

The letters after district place names are part of their description – a county borough (CB), for example, is a distinct area from an urban district (UD) or a metropolitan area (ME).

In some districts, around 10% of the population of children aged 14 and below had lost their father

Scanned image of the 1921 Census County Report for London depicting Table 24 on the topic of orphanhood. The statistics being shown are for the metropolitan boroughs of Finsbury, Fulham, and Greenwich.

Download this image Scanned image of the 1921 Census County Report for London depicting Table 24 on the topic of orphanhood. The statistics being shown are for the metropolitan boroughs of Finsbury, Fulham, and Greenwich.

The urban district of Enfield, London was the district with the highest percentage (1%) of children aged 14 years and below where both parents had died. There were two more London urban districts in this position; Hendon and Ilford.

In 1921, the number of females in England and Wales outnumbered males by 19.8 million to 18 million respectively across all ages. This compares with 18.6 million females and 17.4 million males in 1911.

The imbalance between males and females in 1921 was most pronounced among those in their 20s and 30s.

During the first two decades of the 20th century, [government schemes existed to encourage ‘surplus women’ to emigrate to other parts of what was then the British Empire, to try and redress the imbalance].[7]

Population by age and sex, England and Wales 1921

Nine out of the 10 districts with the highest percentage of females are coastal.

But rather than this being an increase in the number of females, this information could be more about the lack of males. On census night, anyone at sea, such as fishermen or members of the merchant navy, who did not arrive in port the following morning, would not be included in the census count.

The census showed most districts which included the highest proportion of males were also home to institutions such as military or naval barracks, or prisons.

Percentage of men and women and their location on census night, England and Wales, 1921

For example, Amesbury rural district in Wiltshire, had the second highest percentage point difference between males and females (29pp) on census night, with 65% males and 35% females. Amesbury is also the location of a military barracks in which there were 5,308 males and 972 females making 5.5 males for every female within the barracks.

There were 2,703 males in naval barracks, naval hospitals or Royal Navy ships on census night, compared with 100 females. That made 27 males for every female.

While members of the Armed Forces serving overseas were included in the census, there were some exceptions from the count.

Given that the 1921 Census was conducted during holiday season in June, following a three-month postponement, it’s likely that the population of popular holiday destinations such as Blackpool was larger in 1921 than it was in 1911.

Blackpool county borough saw the second largest population percentage point increase between the 1911 and 1921 Census, as a proportion of England and Wales (0.09%).

Two other seaside locations were also among the 10 places which saw the largest population percentage point increase on census night, Southend on Sea county borough and Margate municipal borough.

The Census General Report was very confident that there was a known effect on holiday resorts, stating there was 'no doubt' that the 'periodical summer movement' had caused a greater divergence of resident and counted populations than if the census had been taken in April.

The City of Birmingham county borough experienced the highest percentage point change as a proportion of the population of England and Wales between 1911 and 1921, which was 0.1%. This was a time of rapid urbanisation, which could explain the change.

The 1921 Census collected information on how many rooms people had and how many people lived in their home.

This information was used to calculate density of occupation in terms of rooms per person.

The rooms counted were the usual living rooms, including bedrooms and kitchens but excluding sculleries, landings, lobbies, closets, bathrooms, or any warehouse, office or shop rooms.

Hebburn urban district in the county of Durham, had the least amount of living space, with just 0.59 rooms per person. This district also saw an increase in population between 1911 and 1921, alongside seven out of the 10 districts with the least living space.

Shoreditch also had fewer people there on census night as a proportion of the population of England and Wales, than in 1911, a percentage point drop of 0.03%.

This article is the second instalment of the Census Unearthed series to be published by the Historic Censuses Digitisation Project, as part of our statistical archaeology work to make the statistics from 1921 through to 1961 accessible. Your feedback and comments would be welcomed.