UK unemployment rate remains at its lowest since 1975 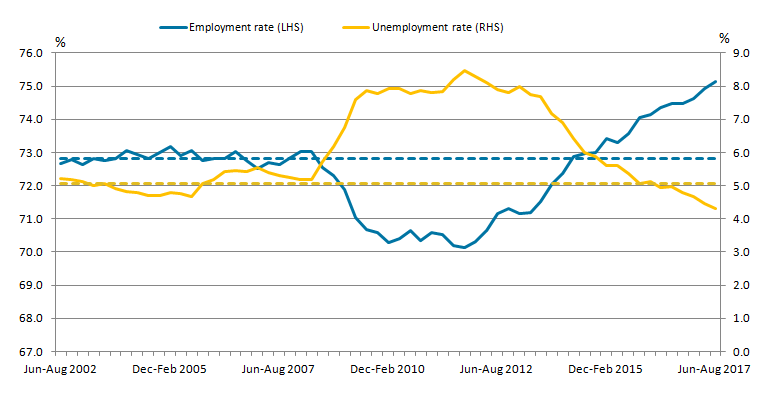 The numbers of people in employment, unemployed and economically inactive in the UK show relatively small changes from quarter to quarter. However, these changes are the net effect of large numbers of people moving between different labour force categories, most notably the three economic activity groupings of employment, unemployment and inactivity. Labour market flows data complement changes in headline levels of employment, unemployment and inactivity, and help to explain trends in these three statuses. Gross flows are the total number of people moving, for example, from employment to unemployment, or inactivity, and the total number of people who move in the opposite direction. In total there are nine different flow categories for the three economic activity groupings, with another two being those individuals entering or leaving working age.

This section of the article uses two-quarter longitudinal data back to 2001, which is the first point at which consistently weighted time series are available. For analysis of the longitudinal datasets, the stock of the employed, unemployed and inactive at each quarter need to be obtained by summing the three corresponding flow categories. For example, employed is given by summing those employed at both quarters, those who move from unemployment to employment and those moving from inactivity to employment. It should be noted that the stocks derived from the longitudinal dataset differ slightly to those obtained from a quarterly cross-sectional dataset and published figures due to attrition and also because those who are entering or leaving working age are excluded.

Figure 3 shows estimated gross flows, that is, the total inflow or outflow for working-age employment, unemployment and inactivity from one calendar quarter to the next. The period covers January to March 2017 (Quarter 1) and April to June 2017 (Quarter 2). Approximately 3.22 million people move across the labour market either by moving from one pool to another or changing employment every quarter. More people left inactivity (937,000) than any other stock. The number of people who moved from inactivity to employment was 540,000. This was higher than those who moved from unemployment to employment, which was 439,000. Comparing these gross flows with the published quarterly changes in the headline Labour Force Survey aggregates reveals how substantial the underlying movements hidden behind these values are.

Figure 4: Comparison of four-quarter moving average of flows as a percentage of working age population

1.We use a four-quarter moving average to adjust for volatility in the series.

Download this chart Figure 4: Comparison of four-quarter moving average of flows as a percentage of working age population

Figure 4 compares four-quarter moving average flows as a percentage of working-age population since April to June 2003 with the latest available period (April to June 2017). In the three months to June 2017, on average 459,000 people (1.12% of the working age population) moved from unemployment to employment every three months, whereas 290,000 people (0.70% of working age population) moved from employment to unemployment, the lowest since the earliest comparable period in 2001. Flows from employment to unemployment as a four-quarter moving average have been falling since July to September 2016. This means that not only are there more people in work (higher employment levels) as per published Labour Force Survey indicators, but on average a record low level of employed people are transiting into the unemployed category.

In contrast, Figure 4 shows that there was a notable rise in the flow from employment to unemployment during the most recent economic downturn. This is because in economic downturns, as the labour market gets looser, there are more movements between the statuses. The unemployment pool is most affected as more of the unemployed find a job or stop searching for one. Also, more of the inactive population may start looking for a job and more workers lose theirs. In other words, gross flows in and out of the three pools appear countercyclical1. In expansions, as the labour market becomes tighter, there are fewer movements between these three statuses, whereas in economic downturns, there are more movements between the statuses.

Figure 5: Contributions to net inflows to employment, from inactivity and unemployment

Download this chart Figure 5: Contributions to net inflows to employment, from inactivity and unemployment

Figure 6: Outflows from inactivity, to employment and unemployment

Download this chart Figure 6: Outflows from inactivity, to employment and unemployment

Labour market flows do not capture the full extent to which someone who is of working age is likely to change their economic status. Hazard rates are the transition probabilities that imply the relative likelihood of someone changing status or remaining in the same category. Table 2 shows hazard rates for separations (movement from employment to unemployment) and hiring, job moves expressed in thousands, for the latest available period (April to June 2017), as well as their respective correlation with the unemployment rate.

Table 2 indicates that in the three months to June 2017, the probability of separation (a move from employment to unemployment) for people in employment was 0.9%, whereas for those in unemployment the probability of being hired was 28.7%. The hazard rate for hiring was higher than for any other flow. The hazard rate for remaining in the same status was 97.3% for employment (highest since the earliest available period in 1997), and 88.1% for inactivity in the three months to June 2017. For unemployment this was much lower at 52.7%. The correlations with unemployment rate (column three, Table 2) imply that separations are countercyclical and job hiring is procyclical2. The correlation coefficient for resignations is similar to hiring, which highlights that resignations also seem to follow trends in economic cycles.

Overall, Table 2 shows that the separations rate (from employment to unemployment) appears countercyclical, whereas job-to-job moves, hiring, resignations, retirements and giving up work appear procyclical. In other words, recessions are periods when it is harder for an unemployed individual to find a job, an employed person is more likely to lose their job, an employed person is less likely to change jobs and is less likely to resign or give up their work. Transition probabilities between employment and inactivity do not seem to have a cyclical component.