An overview of the labour market in March 2018 covering unemployment, underutilisation, employment and wage growth by sector

Latest estimates from the Labour Force Survey show that the number of unemployed people increased by 24,000 to 1.45 million in the three months to January 2018 when compared with August to October 2017. The slight increase in the number of unemployed people was insufficient to have a material impact on the unemployment rate, which stayed at 4.3% in the three months to January 2018, unchanged on the previous quarter.

Broken down by gender, the unemployment rate for women increased by 0.3 percentage points. The age breakdown does not reveal any obvious generational pattern, however, it is worth mentioning that unemployment is at a record low level for 25- to 34-year-old men.

Employment continued to rise. In the three months to January 2018, there were 32.25 million people in work, which was 402,000 more than for the same period a year earlier and 168,000 more than the previous quarter. This change was driven by full-time employees, whose number rose by 182,000 to 20.29 million in the three months to January 2018, when compared with the previous quarter.

By way of context, Figure 2 plots quarter-on-quarter growth rates of real gross domestic product (GDP) and employment. Output depends on the amount of labour used in production; but the link between the two variables is less trivial than that relationship alone. Economic growth leads to job creation and therefore higher employment. However, growth can take place in less labour-intensive sectors, or sectors with limited ability to employ additional labour (for example, in a situation of skills mismatches).

Similarly, the job destruction rate tends to be lower than the fall in GDP at the time of recessions – regulatory framework and labour hoarding can considerably soften the impact of output contraction on the labour market.

For the aforementioned reasons, the growth in employment is positively correlated but lower than economic growth. This can be clearly seen in the years before the downturn where the quarter-on-quarter GDP growth is, on average, consistently above the changes in employment. Following the recession, however, the rates have converged.

As evidenced by the European Central Bank in 2016, similar but more moderate convergence was taking place in the Euro zone (PDF, 176.7KB). The correlation between output and employment growth was higher than previously, which could be partly explained by concentrated output growth in sectors with high labour intensity but weakly performing wages, such as services, trade and transport. The higher than average proportion of part-time workers in some of those growing sectors was also found to have contributed to slower overall wage growth in the Euro zone.

The following sections look at some of the changes in employment patterns that took place in the UK since the end of the last economic downturn.

Such disproportionate growth in part-time workers remained a feature of self-employment. By way of context, the number of employees working full-time grew by 6.21% and part-time by 8.43% between November to January 2008 and November to January 2018. In other words, the overall change in the number of employees did not show signs of similarly substantial rebalancing between the working patterns.

While the UK economy expands, real wages continue to fall and continue to perform poorly compared with our European counterparts. The headline measure of unemployment, historically, has been used to interpret labour supply and is therefore heavily relied upon in explaining wage growth.

Simplistically, you could expect nominal wage growth to be relatively high, following the recent UK record low unemployment since 1975. The real wage growth may be harder to predict because inflation can be induced by various external pressures, such as the sterling depreciation, however, in the medium term, you could expect it to be positive in the existing economic climate. This has not been the case, with real wage growth staying between negative 0.6% and positive 0.6% excluding bonuses (or negative 0.6% percent and positive 0.5% including bonuses) during 2017, with little sign of acceleration towards the end of the year.

The puzzling coexistence of low unemployment and low wage growth is not a unique feature of the UK economy. To take one example, Australia also witnessed the tightening of its labour market in 2017. As in the UK, the wage growth remained very moderate. Evidently, the labour market is not responding to employment pressure in the same way as it had done before.

One obvious feature of the headline measure of unemployment is its failure to capture the full extent of underutilisation of labour. As we discussed in the October 2017 Economic Review, gradual changes in the labour force composition or labour contracts (among other factors) may have led to a shift towards more implicit forms of underutilisation of labour such as underemployment.

The data discussed in the September 2017 labour market economic commentary suggested a broadly downward trend in underemployment. The data published in February 2018 suggest a far more modest fall in the second half of 2017, compared with the same period in years between 2013 and 2016.

Figure 4: Share of workers unable to find a full-time or permanent job among those working part-time or on a temporary contract

UK, seasonally adjusted, January to March 2006 to November to January 2018

Download this chart Figure 4: Share of workers unable to find a full-time or permanent job among those working part-time or on a temporary contract

Temporary workers represent another category that is worth considering in the context of wage growth. Using data from the Annual Survey of Hours and Earnings, we previously found that workers on fixed-term contracts were earning less than their counterparts on permanent contracts, taking into account their characteristics (such as age, tenure, industry they were employed in and so on). The research conducted by the European Commission also suggested a noticeable negative wage premium associated with being on a fixed-term contract (PDF, 564.4KB), a conclusion that held not only for the UK but also for most other European nations1.

Since the size of the workforce grew over time, Figure 4 looks at the number of workers on temporary contracts in relation to those on permanent contracts. Furthermore, we focus on one specific sub-group; those who could not find a permanent job. As you would expect, the period between March to May 2008 and June to August 2013 was characterised by an increase in the number of workers falling under this category.

Similar to the case of part-time workers who could not find a full-time job, the number of temporary workers who could not find a permanent job started decreasing thereafter but remained relatively high and is growing again – perhaps a sign of economic uncertainty. As indicated previously, on average, such workers would be earning less than their permanent counterparts, adjusted for job and personal characteristics.

In the previous commentaries, we looked at some of the other compositional factors that could affect wage growth. For example, a growing number of low-paid workers relative to the number of those with higher pay would exert a downward pressure on the median wage. The data in the February 2018 labour market economic commentary indicated that, on the contrary, the growth in employment was in fact centered on higher skilled and higher median wage occupations. At the same time, the most pronounced wage growth took place amongst low-skilled occupations, partly because of the increases in the National Minimum Wage and the National Living Wage.

The data on vacancies in the January 2018 labour market economic commentary showed that despite the falling number of people looking for jobs, employers in many industries did not appear to be finding it considerably more difficult to fill the vacancies, and therefore felt less pressure to raise wages. Consistent with that, in November 2017, the analysis of Annual Survey of Hours and Earnings (ASHE) data showed that accommodation and food, and transport and storage industries had the highest job creation, whilst having relatively poor-performing median wages.

UK, regular pay growth, 3 month on 3 month, a year ago, seasonally adjusted, January to March 2006 to November to January 2018 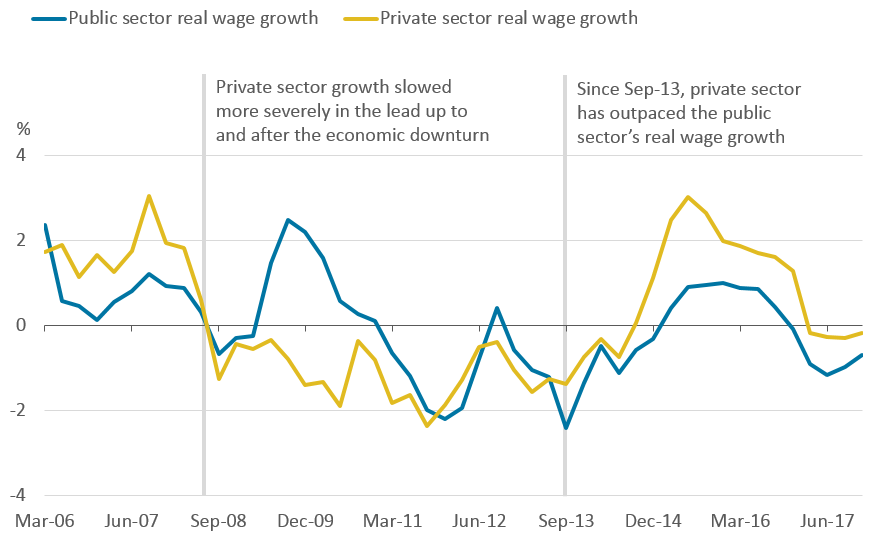