A measure of cross-border transactions between the UK and rest of the world. Includes trade, income, capital transfers and foreign assets and liabilities.

We have identified a processing error in the repayments of UK corporate bonds. We are investigating the options for addressing the error and will publish further details and revised data as soon as possible. The series known to be directly affected is XBLX: Debt securities investment in the UK. There will be a knock on impact to high level aggregates within the financial account.

In accordance with the National Accounts Revisions Policy, the revision period for this release is open from Quarter 1 (Jan to Mar) 2016.

The Balance of payments (BoP) Quality and Methodology Information (QMI) document is available on our website.

See our website for an overview of how movements in foreign exchange rates can impact the balance of payments and international investment position.

During 2016 there have been numerous large acquisitions of UK companies by foreign investors, most notably in Quarter 4 (Oct to Dec) 2016. Some of the impacts on the accounts are outlined in section 7, the financial account. Further information can also be found in the Merger and Acquisitions statistical bulletin and accompanying short article.

Figure 1: UK balances as a percentage of gross domestic product

Download this chart Figure 1: UK balances as a percentage of gross domestic product

In addition to the narrowing in the trade in goods deficit there was a narrowing in the deficit on primary income to £1.0 billion (or 0.2% of GDP) in Quarter 4 2016, compared with a deficit of £4.3 billion (or 0.9%) in Quarter 3 2016 (see section 5 for more information). Additionally there was a £2.4 billion widening in the trade in services surplus due to a larger increase in exports than imports.

Notes for: UK current account deficit narrows due mainly to a narrowing in the deficit on total trade

The total trade deficit narrowed by £10.0 billion to £4.8 billion in Quarter 4 2016, following a sharp widening of the deficit in Quarter 3 2016; this narrowing was predominantly due to an increase in the exports of goods, which increased by £7.6 billion in Quarter 4 2016 (Figure 2). Of this £7.6 billion, £2.5 billion can be attributed to increases in exports of goods categorised as erratic commodities (for example, non-monetary gold, aircraft), with a further £1.6 billion attributed to exports of oil. Of the additional £3.5 billion increase in exports other than erratic and oil series, there was a large increase to the exports of machinery (£1.0 billion), with many other smaller increases elsewhere.

Please note: Erratic series are defined as a specific group of commodities that are both volatile and high in value so impact the overall trade in goods balance. These are defined as ships, aircraft, precious stones, silver and non-monetary gold.

Notes for: Trade deficit narrows due to rise in exports of goods

The value of earnings on UK foreign direct investment (FDI) abroad (credits) has increased over each quarter of 2016, whereas the value of earnings on inward FDI (debits) has remained broadly constant. Figure 4 shows FDI debits have been relatively constant, fluctuating between £10 billion and £16 billion per quarter since the start of 2011. At the same time, the values of FDI credits have fallen from an average of £26.2 billion per quarter in 2011 to £16.3 billion per quarter in 2016. These trends made the balance of FDI earnings (the difference between credits and debits) a deficit in Quarter 4 of 2015 and Quarter 1 2016. The balance on earnings returned to a surplus from the second quarter onwards, leading to a surplus on earnings for the whole of 2016 (of £9.5 billion). This is similar to the level achieved in 2015 (£9.1 billion) and suggests that the longer-term downward trend in net FDI earnings may have flattened, which was supported by the value of UK credits increasing over 2016. 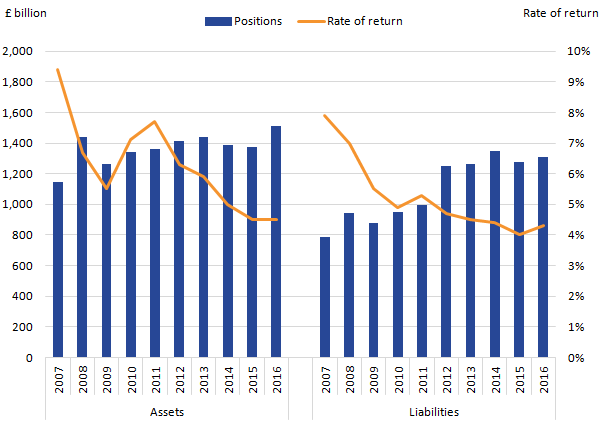 We published more detailed analysis of FDI statistics in a review of UK FDI statistics, which explores some of the factors behind the trends in implied rates of return and the impact of exchange rate changes on UK FDI among other topics.

Notes for: Current account with EU and non-EU countries

The comparatively large net inflow on the financial account balance leads to an unusually large net errors and omissions (see section notes) figure for Quarter 4 2016, which is because we do not yet have all the information necessary. All the evidence available at this points suggests that the large inflow of direct investment seen in Quarter 4 2016 appears to not have been completely reflected in other areas of the financial account. In practice, we capture the different parts of an acquisition through a mix of survey and administrative data. Combined with the usual financial transactions the dilution of an acquisition as it filters through the various parts of the accounts as shareholders receive their payment and then possibly re-invest make it difficult to trace all parts of the deal. In a sense, the large net errors and omissions presented for Quarter 4 2016 reflects unallocated flows, which have yet to feed through some of our other survey and administrative data. As more data and information becomes available on the nature of any such deals, we expect these unallocated flows to be captured more completely, which will naturally lead to a reduction of the net errors and omissions for Quarter 4 2016.

Looking at direct investment annually, UK direct investment overseas (foreign direct investment (FDI) outflows) were negative in 2014 and 2015. This indicates that UK investors abroad were disinvesting in those years (Figure 8). UK FDI outflows became positive once again in 2016 (£30.4 billion) and were comparable with the value of flows in 2013 (£28.6 billion).

FDI inflows to the UK were broadly constant from 2012 to 2015, which is similar to the constant values of UK debits and liabilities; FDI inflows averaged £31.4 billion per year over that period. However, the value of FDI inflows in 2016 increased considerably, reaching £227.7 billion. Part of this increase in FDI inflows reflects a small number of very high value mergers and acquisitions that completed in 2016, as outlined earlier in this section and also in the Mergers and Acquisitions statistical bulletin and accompanying short article on Provisional statistics on mergers and acquisitions involving UK companies for 2016.

Portfolio investment recorded a switch from a net inflow to a net outflow (that is, more money flowing out of the UK) of £8.1 billion in Quarter 4 2016 due to the net disinvestment by non-residents of £24.7 billion.

The international investment position showed net external assets (that is, assets exceed liabilities) of £468.5 billion at the end of Quarter 4 2016, compared with net external assets of £190.6 billion at the end of Quarter 3 2016 (Figure 9). This is the largest net external asset position since records began in Quarter 4 1977. As highlighted in section 7, the financial account, the impact of some of the recent takeover deals may not be fully reflected in the international accounts at this stage until full details of the structure of the deal are known.

Meanwhile, the fall in UK assets was due mainly to a decline in financial derivatives, with the latest figure dropping by £217.2 billion to £2,503.0 billion (the lowest value in four quarters). Reserve assets also declined during the quarter. All the other types of UK financial assets increased during the quarter, which can partly be linked to the weakness of sterling increasing their value. As most UK assets are held in foreign currency, a fall in the pound will lead to an increase in the sterling value of the UK assets already held. 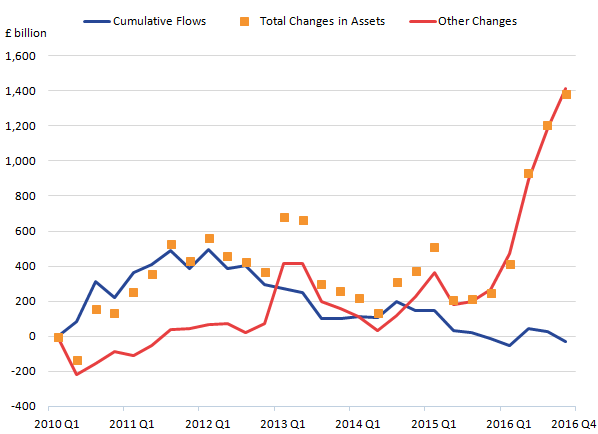 Figure 10 shows the cumulative change in the end of quarter valuation of UK financial assets abroad. For this piece of analysis we have only used direct investment, portfolio investment and other investment. Financial derivatives have not been included due to their volatility and reserve assets due to their comparatively small size. Most of the assets will be held in the foreign currency of the country that they are invested in and need converting back to sterling. Plotted against the changes in assets are the cumulative flows or net transactions (blue line), which in the early periods up until Quarter 3 2014 are the main reason for changes in UK foreign assets. This indicates that the changes in the asset level are due mainly to investor actions, either buying or selling assets.

Other changes (red line) impact the asset valuations and can include, for example, foreign currency movements, asset price movements, reclassifications and write-offs. While other changes show little impact in the early periods, they are the main reason for changes in asset levels from Quarter 1 2015. One reason for their increased impact will be the devaluation of sterling from around Quarter 3 2015 (see Figure 11). Another reason will be the increased market valuations of foreign stock markets, some of which ended at their highest level for 2016. The impacts of other changes are highlighted in some recent periods where UK investors have been net sellers of foreign assets but have still seen the value of their assets increased.

We have previously published an article summarising the impact of exchange rates on direct investment abroad. 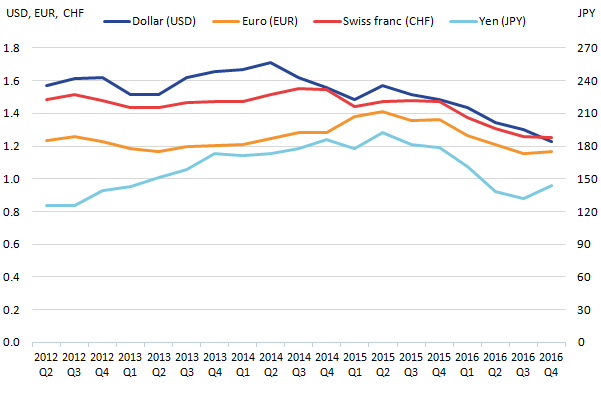 Figure 11 presents sterling exchange rates against the currencies of major trading partner countries at the close of markets at each quarter end. During Quarter 4 2016, sterling depreciation slowed and still stands almost 15% lower than a year ago compared with a basket of foreign currencies. Sterling only showed a noticeable depreciation against the United States dollar while it actually appreciated against the Japanese yen in the latest quarter.

The stock of UK assets and liabilities with the rest of the world can be influenced by movements in exchange rates and price revaluations. Table 1 summarises which type of investment is impacted by these changes.

Table 2 shows revisions to the current account balance as a percentage of GDP quarterly from Quarter 1 2016 to Quarter 3 2016.

Revisions in this publication are due to late or revised survey data and a reassessment of seasonal adjustment factors, which could have impacted the current account and GDP. There are no changes to methods or annual benchmark data in this release.

Table 2: Balance of payments revisions to current account balance as a percentage of gross domestic product, Quarter 4 (Oct to Dec) 2016

Download this table Table 2: Balance of payments revisions to current account balance as a percentage of gross domestic product, Quarter 4 (Oct to Dec) 2016