Balance of Payments: Apr to June 2016

This has been superseded. View corrected version

The financial account recorded a net inflow of £14.5 billion during Quarter 2 2016.

The international investment position recorded UK net liabilities of £57.0 billion at the end of Quarter 2 2016.

From January 2017 we are improving the way we publish economic statistics, with related data grouped together under new "theme" days. This will increase the coherence of our data releases and involve minor changes to the timing of certain publications. For more information see Changes to publication schedule for economic statistics.

The balance of payments summarises the economic transactions of the UK with the rest of the world. These transactions can be broken down into 3 main accounts: the current account, the capital account and the financial account.

The £0.5 billion widening in the secondary income deficit in Quarter 2 2016 to £6.0 billion was due to payments increasing while receipts were virtually unchanged.

Download this chart Figure 2: UK balances as percentage of GDP

Notes for Current account balances as percentage of GDP

Trade in goods covers transactions in general merchandise for which changes of ownership occur between UK residents and the rest of the world. General merchandise (with some exceptions) refers to moveable goods.

The trade in goods deficit in Quarter 2 2016 was £34.7 billion, compared with a deficit of £32.9 billion recorded in Quarter 1 2016. The widening in the deficit in Quarter 2 2016 was due to imports rising by £4.4 billion, compared with a rise in exports of £2.6 billion. The increase in imports was spread across all components but primarily due to a £1.9 billion rise in machinery and transport equipment. There were also rises in oil (£0.8 billion), material manufactures (£0.6 billion) and unspecified goods (£0.6 billion). The rise in exports was mainly due to a £2.6 billion increase in machinery and transport equipment, of which aircraft rose by £1.4 billion while other components had small offsetting movements.

Trade in services covers the provision of services by UK residents to non-residents and vice versa. It also covers transactions in goods which are not freighted out of the country in which transactions take place, for example, purchases for local use by foreign forces in the UK, or by UK forces abroad and purchases by tourists. Transactions in goods which are freighted into or out of the UK are included under trade in goods.

The fall in exports was mainly due to a fall in the export of other business services of £0.7 billion. Offsetting this was a £0.2 billion rise in the export of government services. Other components recorded small offsetting changes.

The small rise in total imports of services was mainly due to an increase in the import of transport services and financial services by £0.3 billion and £0.2 billion respectively. These were partially offset by small falls in the import of most other components, such as other business services.

Investment income covers earnings (for example, profits, dividends and interest payments and receipts) arising from foreign investment in financial assets and liabilities. Credits are the earnings of UK residents from their investments abroad and other foreign assets. Debits are the earnings of foreign residents from their investments in the UK and other UK liabilities. The flow of investment in the financial account is recorded separately from earnings, although reinvested earnings of companies with foreign affiliates are a component of both. The total value of UK assets and liabilities held at any time is also recorded separately under the international investment position.

Foreign direct investment (FDI) net earnings have followed a broadly downward trend from 2011, falling from an average surplus of £13.4 billion per quarter in 2011 to a record deficit of £6.2 billion in Quarter 4 2015. This was driven by consistent falls in credits, whilst debits increased slightly over the same period. The deficit in net FDI earnings narrowed in the first 2 quarters of 2016, reaching a deficit of £2.0 billion in Quarter 2 2016.

The broadly downward trend shown in FDI credits since 2011 was predominantly caused by falling returns – with the rate of return on FDI assets falling from 7.7% in 2011 to 4.8% in 2015 – while FDI assets remained fairly consistent over this period. In contrast, FDI debits have tended to increase over this period. Initially, this was due to increased investment into the UK, with FDI liabilities rising up until 2015, before rates of return also began to increase in 2015.

The narrowing of the FDI net earnings deficit in the first 2 quarters of 2016 was driven by several combining factors. Firstly, FDI debits fell from £19.1 billion to £16.8 billion between Quarter 4 2015 and Quarter 1 2016; due to a fall in FDI liabilities rather than a change in returns, as shown in Figure 7. FDI credits, meanwhile, were virtually unchanged in Quarter 1 2016. 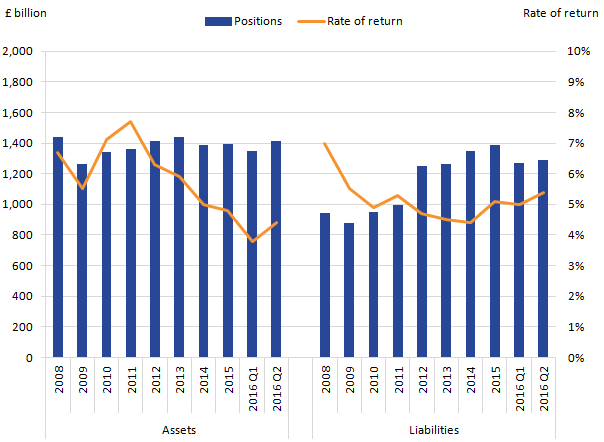 The portfolio investment income deficit widened by £0.2 billion between Quarter 1 2016 and Quarter 2 2016, to £5.2 billion. This was due to a slight widening in the deficits in both equity securities and debt securities.

The deficit on earnings from other investment was virtually unchanged at £2.7 billion in Quarter 2 2016.

Secondary income represents the provision (or receipt) of an economic value by one party without directly receiving (or providing) a counterpart item of economic value. In plain terms, this is a transaction representing “something for nothing” or without a quid pro quo. Transfers can be in the form of money or of goods or services provided without the expectation of payment. General government transfers include receipts, contributions and subscriptions from or to European Union (EU) institutions and other international bodies, bilateral aid and military grants.

It should be noted that the quarterly path of net contributions to EU institutions can be erratic due to the timing of payments.

The capital account comprises 2 components: capital transfers and the acquisition or disposal of non-produced, non-financial assets.

Under BPM6, there is no longer a requirement to record migrant transfers. The manual clarifies that the change in the residence does not involve a transaction between 2 entities but a change in status.

Capital transfers are those involving transfers of ownership of fixed assets, transfers of funds associated with the acquisition or disposal of fixed assets, and cancellation of liabilities by creditors without any counterparts being received in return. As with current transfers, they can be subdivided into general government transfers and other sectors transfers. The main sources of information are government departments (Department for International Development and HM Treasury) and the Bank of England. Compensation payments from the EU are also included here, for example, payments related to the destruction of animals to combat BSE and foot and mouth disease.

The sale or purchase of non-produced, non-financial assets covers intangibles such as patents, copyrights, franchises, leases and other transferable contracts, and goodwill. It also covers transactions involving tangible assets that may be used or needed for the production of goods and services but have not themselves been produced, such as land and sub-soil assets. The use of such assets is recorded under trade in services as royalties and license fees; only the outright purchase or sale of such assets is recorded in the capital account.

The financial account covers transactions that result in a change of ownership of financial assets and liabilities between UK residents and non-residents, for example, the acquisitions and disposals of foreign shares by UK residents.

UK external assets abroad increased by £708.8 billion from the end of Quarter 1 2016, to a level of £11,020.0 billion at the end of Quarter 2 2016. The increase in the stock of UK external assets in Quarter 2 2016 was due to an increase in the value of stock in all asset classes. The value of UK portfolio investment assets increased in Quarter 2 2016 due to the combination of exchange rates movements and price changes in equities and bonds as UK residents continued to be net sellers of foreign equities and debt securities. 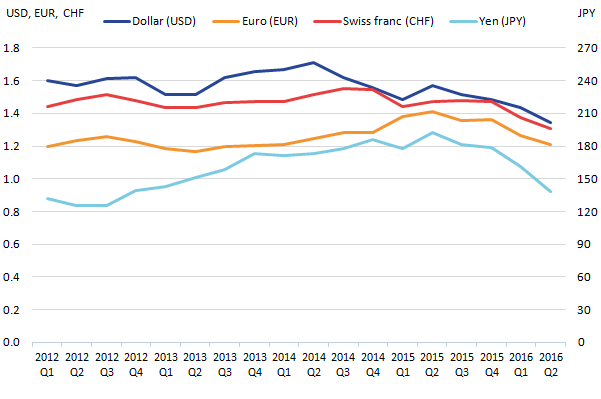 Figure 11 presents sterling exchange rates against the currencies of major trading partner countries at the close of markets at each quarter end. The chart shows that sterling has been depreciating against most currencies since Quarter 2 2015. From Quarter 4 2015, sterling weakened markedly and continued to weaken following the European Union referendum held in the latter part of Quarter 2 2016. This weakening has in part contributed to the decrease in the UK’s net liability position.

The stock of UK assets and liabilities with the rest of the world can be influenced by movements in exchange rates and price revaluations. Table 1 summarises which type of investment is impacted by these changes.

Most UK assets are held in foreign currency although a small portion of assets such as deposits and loans are held in sterling. Due to the UK’s Balance of Payments being presented in sterling, some assets have increased in value due to the devaluation of sterling. An article summarising the impact of exchange rates on direct investment abroad has also been published today. While direct investment and portfolio investment liabilities are valued in sterling, some elements of other investment liabilities are held by foreign investors in foreign currency, so have also increased in value as a result of the sterling devaluation.

Direct investment and portfolio investment, assets and liabilities, can also be impacted by price changes. During Quarter 2 2016, UK equity assets in the United States of America would have fared comparatively well as the main indices increased slightly compared with falls in European indices, however, foreign exchange movements more than offset these movements. UK equity liabilities increased from Quarter 1 2016 as non-residents continued to invest in UK equities together with the All-share index closing higher despite market volatility. Over the same period, the value of debt securities increased in the UK and generally around the world leading to increases in debt security assets and liabilities.

Data in this release have been revised from Quarter 1 (Jan to Mar) 2015. Revisions tables are included in the balance of payments datasets (Tables R1, R2 and R3). Revisions are due to:

Trade in services – Revisions from Quarter 1 2016 are due to updated and late data to survey and administrative sources and a reassessment of seasonal factors.

Capital account – Revisions to the capital account are attributable to revised source data from HM Treasury and the ONS International Trade in Services survey.

Table 2 provides revisions to the current account balance as a percentage of GDP annually for 2015 and quarterly between Quarter 1 2015 to Quarter 1 2016.

Table 2: Balance of Payments revisions to current account balance as a percentage of GDP, Quarter 2 (Apr to Jun) 2016

Download this table Table 2: Balance of Payments revisions to current account balance as a percentage of GDP, Quarter 2 (Apr to Jun) 2016

More detailed methodological notes for the UK balance of payments are available on our website.

In accordance with the National Accounts revisions policy, the current revision period is open from Quarter 1 (January to March) 2015.

The Quarter 2 (April to June) 2016 Balance of Payments dataset contains revised Trade in Services estimates compared with those published in the UK Trade bulletin on 9 September 2016. The minor revisions are due to methodological changes, late data returns and the balancing process applied during the compilation of the gross domestic product (GDP) estimates.

The next Balance of Payments release for Quarter 3 (July to September) 2016 will potentially contain revisions from Quarter 1 (January to March) 2015.

Details of the policy governing the release of new data are available from the UK Statistics Authority website.

The complete run of data in the tables of this statistical bulletin is available to view and download in electronic format through ONS Time Series Data. You can download the complete bulletin in a choice of zipped formats, or view and then download your own sections of individual series. The Time Series Data can be accessed on our website.